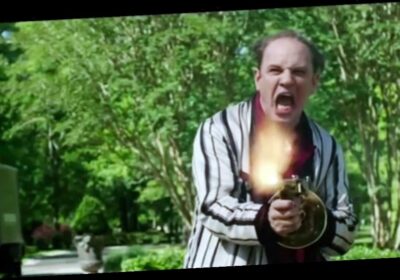 Angry viewers didn’t hold back in their scathing reviews of the Hollywood actor’s new film on social media.

But the movie, based on the untold story of notorious American gangster Al Capone, has still cracked the streaming platform’s top 10 list just days after being uploaded.

It includes a star-studded cast including Matt Dillon, Noel Fisher, Linda Cardellini and Jack Lowden, with Tom as the lead.

But even though Tom is widely-regarded as one of the top actors on the block, it seems even an Academy Award-nominated Best Supporting Actor is not exempt from cruel criticism.

One animated Twitter fan blasted: "Just watched Capone on Netflix. Arguably one of the s***test films I've ever seen."

Another livid viewer moaned: "Actually one of the worst films I have ever seen.

"I like Tom Hardy as an actor and enjoy 'gangster' genre but this was awful."

A third disgruntled fan stressed: "If you're thinking about watching that Capone film this weekend – don't."

"That Capone film on Netflix was the worst film I've watched in a long time," another added.

Tom plays ruthless gangster Capone seeing out his final days as he battles with dementia and the constant memories of his twisted past.

The film solely focuses on the last year of the gangster's life, spent at home in Florida after previously enduring a decade in prison.

Despite his long list of alleged heinous acts, the reason Capone was behind bars for 10 years was due to tax evasion, originally meant to serve 11 years his sentence was cut short due to his decaying health.

But some critics even went as far as to say that Tom's performance the worst of his successful acting career.

In 2018 Tom, 43, was appointed a CBE for his services to drama having appeared in a string of blockbuster movies.

He’s starred in Inception, The Dark Knight Rises and Dunkirk, all directed by Christopher Nolan.

And he’s landed roles in Star Wars: The Last Jedi, The Revenant – alongside Leonardo Di Caprio – and other popular films including Warrior, Rock 'n' Rolla and Legend, where he commendably plays both roles of London gangsters Ronnie and Reggie Kray.

But those film roles and a star performance in the BBC's Peaky Blinders mattered not to frustrated fans who clearly didn’t believe his latest work was up to scratch.

The Next Best Picture website slammed: “Disgusting, sadistic and devoid of any sympathy for its lead character and its story.”