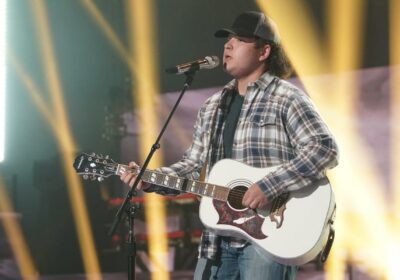 The final four “American Idol” contestants are leaving it all on the stage — though one contestant was notably absent from this week’s episode.

On Sunday’s show, which aired live coast-to-coast, the four remaining singers took on songs by their own personal idols, receiving guidance from guest mentor Finneas O’Connell — a singer, songwriter and record producer who goes by the mononym Finneas. The contestants later returned to sing original singles, followed by songs they performed earlier in their “Idol” journeys.

Though this episode was originally set to feature the final five, Caleb Kennedy, 16, left the competition last week after a controversial video of him surfaced on social media. Host Ryan Seacrest barely touched on Kennedy’s absence on air, saying at the top of the show that the high school student “will not be continuing in the competition” despite making the top five.

In a Snapchat post, Kennedy appeared beside someone wearing what seems to be a Ku Klux Klan hood. Kennedy’s family said the video was recorded when he was 12, and his mother, Anita Guy, said the video “was taken after Caleb had watched the movie ‘The Strangers: Prey at Night’ and they were imitating those characters.”

“Caleb doesn’t have a racist bone in his body,” she added.

Judges Lionel Richie and Luke Bryan gave their thoughts on the controversy in a virtual Q&A after the show. “First and foremost, as judges and as a judges panel, we love these kids, and we get emotionally involved,” Bryan said. “We wish nothing but the best for Caleb, and it does make for a very, very challenging and upsetting week.”

Richie added that he hopes this will be a learning experience for the teenager.

“We grow up, and we make mistakes, and we look at our lives behind us many, many times, and we say, ‘God, what was I thinking about when I did that?’ This is one of those situations,” he said.

As usual, Bryan, Richie and Katy Perry offered feedback as fans voted at home for who they wanted to see in the final three.

Though Beckham was considering ditching the guitar to put focus on the lyrics, he changed his mind, accompanying himself on an acoustic guitar.

And the decision worked in his favor, according to Perry.

According to Bryan, Beckham made the top four because he’s genuine and authentic. Richie agreed, telling the singer that fans “fell in love not only with your voice but with who you are.”

“That’s a genuine quality of being a star,” Richie added.

Later in the show, Beckham returned for his original song “23,” followed by Chris Stapleton’s “You Should Probably Leave,” which he sang during Hollywood Week.

After pointing out that “23” dominated the country music chart after its release, Perry told Beckham he’s clearly a rock star already.

Casey Bishop’s personal idol is someone Finneas knows well: his sister and collaborator, Billie Eilish. The 16-year-old sang Eilish’s “wish you were gay,” which Finneas co-wrote.

“The greatest honor as a songwriter is hearing the song covered, and Casey’s got an incredible instrument,” the mentor said.

Bryan told Bishop she “crushed every aspect” of her performance. “In my opinion it was your best,” he added.

Richie praised Bishop for keeping the audience on their toes.

“You were in a moment that made us wonder, ‘What is she going to do next?’ ” he said. “You killed it my dear.”

Later in the show, Bishop killed it again with her original song “Love me, Leave Me” and Mötley Crüe’s “Live Wire,” which she sang in her first audition. But unlike her audition, the teen got to jam to a live band instead of singing acapella.

“I just can’t believe that you can sing ‘Somewhere Over The Rainbow’ a couple of episodes ago so elegantly and then get down on your knees for ‘Live Wire,’ ” Perry said. “You check all of the boxes. You are ready to party.”

College student Grace Kinstler, 20, sang "A Moment Like This," which Kelly Clarkson belted out during the season one finale of "American Idol" after wining the show. (Photo: Eric McCandless, ABC)

College student Grace Kinstler’s personal idol also happens to be an “American Idol”: Kelly Clarkson, who won the show’s first season when Kinstler was only 1yearold.

Like Clarkson, Kinstler said she wants to become a role model to girls who feel different. She sang “A Moment Like This,” which Clarkson belted out during the season one finale after wining the show.

“You have thought of yourself as trying to be something unique,” said Richie. “You are your normal. It’s totally fresh to everything else in the world. That’s what makes a star.”

Perry revealed her cousins are rooting hard for Kinstler to win. “You are a lot like Kelly Clarkson, and she is a bonafide mega star,” the judge added.

The college student later returned to sing her original song “Love Someone” followed by Demi Lovato’s “Father,” which she sang during the showstopper round.

“All of our birds are about to leave the nest,” said Richie. “Artistry, check. Star power, check. Your future, check.”

Caretaker Willie Spence, who Finneas said has "one of the best voices I’ve ever heard," gave a rousing performance of "Glory" by Common and John Legend, Spence's personal idol. (Photo: Eric McCandless, ABC)

Caretaker Willie Spence, who Finneas said has “one of the best voices I’ve ever heard,” gave a rousing performance of “Glory” by Common and John Legend, Spence’s personal idol.

As usual for Spence, his performance garnered divine praise from the judges.

“I’m so glad you took us to church,” exclaimed Perry. “It was connected. It was spiritual… I’m speechless.”

Perhaps the highest compliment came from Bryan. “You’re literally going to save people’s lives with your voice,” the judge said, as tears streamed down Spence’s face.

Spence returned for equally powerful performances of his original song “Never Be Alone” and Beyoncé’s “I Was Here.”

Perry said Spence proved he has “that connection to that next realm.”

At the end of the episode, Seacrest revealed Beckham, Spence and Kinstler made the top three, which meant Bishop was eliminated.

Post-show, the teen reflected on becoming more confident through “Idol.” Before her audition, most of Bishop’s singing experience came from belting into her hairbrush at home.

“I’m really proud of myself, and everyone else,” she said. “Earlier, during the show, I wasn’t so comfortable, and I think it was noticeable. And now I am.”

The season finale of “Idol” airs at 8 pm ET next Sunday, when Spence, Kinstler or Beckham will be declared the winner.