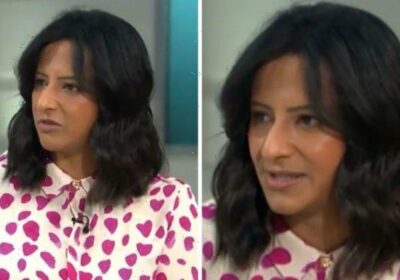 During Tuesday’s Good Morning Britain, ITV host Ranvir Singh got emotional as she discussed the “hideous” racist abuse aimed at some of England’s football players following their loss to Italy in the Euro 2020 final. Ranvir broke down in tears as she spoke with her co-stars Susanna Reid and Richard Madeley about the racist abuse she and her son, eight, have faced. However, during Wednesday’s instalment of the ITV show, the former Strictly star said her son’s school phoned her on Tuesday to check everything was okay. She went on to point out that all schools should follow suit.

“What was really interesting yesterday,” she began. “Was that I got a call from the school just asking if everything was okay.

“I think that was good and I think that’s what schools should be doing with all children from different backgrounds.

“It’s a showing of care and understanding that there may be conversations in the home that children feel uncomfortable having in the classroom.

“And that shouldn’t be the case. So, I thank them for that.”

Ranvir went on to talk about Andrew Pierce’s comment which he made earlier on the show about what does taking to the knee achieve.

The host continued: “I would say this. Courage is contagious.

“I am 43-years-old. I am inspired by young black sportsmen half my age speaking in a way I’ve never spoken before.

“The fact is you can be inspired by other people to be courageous in your own life,” she added. “And to speak up in your own workplace.

“And what I find astonishing is, taking to the knee [is] the most peaceful of protests. It is peaceful and it is quiet.

“For it to cause such a provocation in people who don’t like it, tells you exactly why it should be done.

“It is riling exactly the right people in my view.”

Ranvir went on to explain she spoke with her son after Tuesday’s GMB about what she had said on the show.

“It was my responsibility to talk to him about it,” she admitted. “When I got home and as soon as I said I talked about this on the television, he said ‘I’m really proud of you mummy’.

“Straight away and I said, ‘That’s really nice,’ and he said to me, ‘Just like you don’t want your child [meaning him] to feel racism, I don’t want my children to have racism but I imagine it’ll still happen’.

“That’s my nine-year-old saying it’ll still happen and it’s all our responsibility, isn’t it?”

ITV viewers took to social media after the segment, with many praising Ranvir for speaking out.

One penned: “Well done for always speaking up on racism, your words are inspiring.”

Another praised: “Quite a powerful statement by Ranvir, courage is contagious, I just hope this is not just another watershed moment, the abuse really needs to be stamped out of all walks of life, not just sports!” (sic)

A third added: “Ranvir once again well said! You are absolutely correct to say that taking the knee is the ‘most peaceful’ forms of protest it’s what I’ve always felt but you articulated so beautifully.”