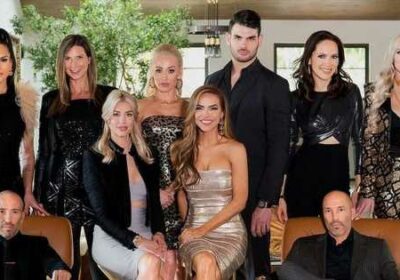 Selling Sunset finally returns on Wednesday, November 24, 2021, for its fourth series with Los Angeles-based real estate firm, the Oppenheim Group, so gear up for another round of drama, sunshine, and really beautiful houses.

The show, which first premiered in the UK in 2019, has been nothing short of a smash hit success with viewers hankering to see inside the lavish homes of the LA's uber-wealthy and the dramatic lives of the people who sell them.

News about season 4 is made even more exciting by the announcement that season 5 has also been green-lit, meaning we have at leasy two seasons to look forward to bingeing.

As the dust settles on Chrishell Stause and Justin Hartley's divorce-via-text, and Christine and Christian's extravagant wedding, questions remain about who will be returning to the show.

Who is back for season 4 of Selling Sunset?

Netflix has confirmed that most of the original cast will be returning in some kind of capacity for season 4, with a flood of familiar faces expected to return.

Despite all of the drama from season three, you're likely to see the following cast members to your screen:

It is also thought that there are likely to be some additions to the group with Vanessa Villela and Emma Hernan expected to join the team.

Chatting with the RadioTimes earlier this year, Mary Fitzgerald said: "We do have a couple of new agents. There’s a chance… we keep trying to tell production and Netflix that we want a couple of the other girls on the show because they’re really good friends of ours.

“They work for The Oppenheim Group and they’re very successful, so I think it would be good to have some new faces. But I don’t know what they’re going to choose.”

The team will be back out in force trying to get the city' richest residents to buy into the the LA dream, and some serious drama is expected to accompany the elite realtors all the way.

When is Selling Sunset back and how can I watch it on Netflix?

Selling Sunset is returning to Netflix on November 24, 2021, a day before the USA's Thanksgiving holiday. This means that viewers in the US have a whole day to plough through the new season.

Netflix tends to drop content at 12.00am midnight US west coast time (PST), meaning UK viewers should be able to watch the show from 8am on Wednesday.

The entire season will be available from the release day, so viewers can binge to their heart's content.

People wanting to watch Selling Sunset can get Netflix on most devices that have an internet connection, with desktop, mobile, laptop, smart TV, tablet and games consoles all widely supporting the streaming service.