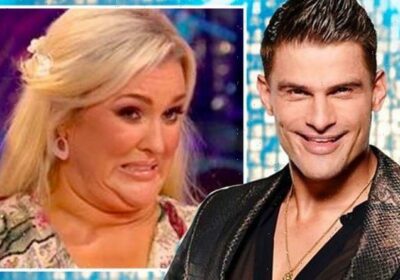 Strictly: Sara reveals what Aljaz says to her before dances

Aljaz and Sara have become one of the fan favourites this year on Strictly Come Dancing, with their quirky routines seeing them impress the judges week on week. Now halfway through the BBC dancing competition, the pair are in contention to get their hands on the Glitterball Trophy as the grand finale is just a few short weeks away. However, the pair have quite an unconventional ritual before they make their way to the studio dance floor each weekend and Sara has admitted her professional dancing partner has admitted he “hates” her.

During an interview on Friday’s edition of Good Morning Britain, the couple spoke about their journey in the competition so far.

It was during this chat the Dragons’ Den star discussed what her professional dancing partner is really like and how surprised she was to learn of his pre-dance ritual.

The Strictly content said: “I’ll tell you what’s really weird because [me and Aljaz] get on really well and he’s smiling all the time.

“And then just before we start the dance, he turns around and gives us this fierce look and says, ‘I hate you, you hate me’.

“‘Go and do it’, and he gave us this grilling look yesterday [in rehearsals] and I just burst out laughing and said, ‘That’s just not going to cut it’.

“‘That’s just not working at all, mate’,” she continued before laughing off the comments.

The pair have become really good friends since learning to dance together, with Aljaz becoming an honorary member of the Davies family.

To adhere to Covid protocols, the professional dancer has moved in with his celebrity partner but he and his wife, Janette Manrara, get to enjoy double dates with Sara and her husband.

Speaking on Loose Women, Sara said: “It’s been great for us. Janette has been coming up on a Monday so we can go out for dinner as the four of us.

“Last week we went for dinner, and last night I had these two, Janette and Aljaž, round for dinner at our house. We had way too many shots of Patron XO Cafe, you’re a bad influence there. It was not good when we had to wake up at 6am this morning dancing.

“I met him at the training room this morning like: ‘Ahhh, I’m still hanging!’ but we had such a laugh and you know what, Janette is such a firecracker. Her and my husband have hit it off as well, so it’s been brilliant spending time with the four of us.”

I hate you, you hate me

This weekend, the pair will be dancing the Argentine Tango as they battle it out against several other celebrities still in the competition.

They will be dancing to the song No More Tears (Enough Is Enough) by legendary singers Donna Summer and Barbra Streisand.

Last week, they managed to stay relatively high on the leaderboard as they scored 33 out of a possible 40 for their Quickstep.

They embodied the characters associated with Dolly Parton’s 9 to 5 and managed to avoid the dreaded dance-off, something they have not yet had to do.

And they will be hoping to avoid it again this time around as they have made every effort to learn every trick in the book to impress the judges and viewers.

Unfortunately, according to Coral bookmakers, they are one of the favourites to be eliminated next as they stand at 2/1 to make an exit.

They sit just behind BBC Breakfast presenter Dan Walker and his partner, Nadiya Bychkova who are in the first position to leave at 7/4.

The Dragons’ Den star’s chances of winning don’t look too good either as she stands at 100/1 to take home the Glitterball Trophy.

She is the only one to hold this position as Dan stands alongside his co-stars Tilly Ramsay and Rhys Stephenson at 50/1 to win.

However, on the other end of the spectrum, it is EastEnders actress Rose Ayling-Ellis who is reigning supreme with Giovanni Pernice.

They are both leading the race as Coral bookmakers have them at 4/11 to win, with their chances of leaving minimal at 110/1.

Speaking of the latest odds, Coral spokesperson Harry Aitkenhead said: “Dan Walker is the favourite to be the next to go from Strictly this year and will have to produce his best dance yet to remain in the competition.

“Our market is predicting a dance-off between Dan and Sara, with the pair given the shortest odds by far of being eliminated this weekend.”

So could it be the end of Sara and Aljaz’s journey this weekend as they lose the dreaded dance-off to Dan and Nadiya?

Strictly Come Dancing continues Saturday at 6:40pm on BBC One.