ME Bank withdrew advertising from Jones' show on Friday and a spokesman said they are reviewing their position over ongoing expenditure. 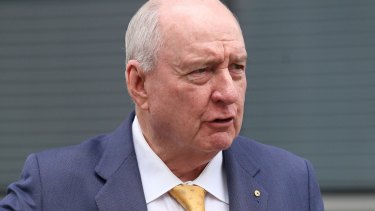 2GB presenter Alan Jones also hosts a program on Sky News and writes a column for The Australian.Credit:AAP

Jones' comment, made during last Thursday's breakfast program in response to Ms Ardern's criticism of Australia on climate change at the Pacific Islands Forum, drew widespread condemnation – including from Mr Morrison who described it as “way out of line”.

Jones – whose show is simulcast to Brisbane's 4BC and Canberra's 4CC – initially issued a statement saying his comments had been "misinterpreted" on Thursday afternoon, but did not apologise. He then continued to verbally attack Ms Ardern the next morning, calling her a "hypocrite" and "gormless".

Later on Friday, Jones wrote to Ms Ardern to apologise, as well as announcing his error publicly.

"My comments were careless and they should have been more clearly thought and to that extent I have erred and made a mistake," Jones said on 2GB, which is owned by Macquarie Media. "I was wrong and I apologise."

By that stage, ME Bank had pulled advertising following a campaign by Sleeping Giants – an organisation that pressures advertisers to, in its own words, "make racism, bigotry and misogyny less profitable".

ME Bank tweeted on Friday that "we take this very seriously and these types of comments don't reflect our values. We've expressed our concerns to 2GB and have pulled advertising."

Snooze followed, posting that it takes Jones' comments "very seriously" and had pulled all advertising, with no other ads planned for the station.

Macquarie Media chairman Russell Tate said on Saturday that Jones' contract, which was renewed for two years in May, would be terminated if he made "any recurrence of commentary of this nature".

But advertisers on Monday have continued to announce their departure with at least two more pulling the pin.

Global gym franchise Anytime Fitness announced via Facebook it had pulled all advertising from 2GB on Friday and "do not have any further advertising planned with the station".

"Koala has cut ties with Alan Jones. We’re a significant buyer in the medium, and it’s something we should have done earlier. Climate change is real, violence against women starts with words and the bloke has had too many chances."

In addition to targeting advertisers, Sleeping Giants has also launched a campaign to "send a sock" to Nine Entertainment chair Peter Costello in a bid to have Jones ousted. Nine has a majority stake in Macquarie Media, and is also the owner of this masthead.