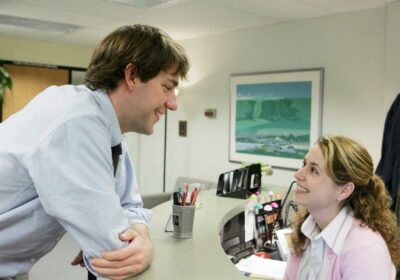 Although A Quiet Place wasn’t intended to have a sequel, John Krasinski‘s creative juice took a turn for the better and introduced us all to another exceptional horror film: A Quiet Place Part II. Fortunately, Krasinski also convinced his wife to get on board, despite her reservations to make a sequel to the hit sci-fi film. Believe it or not, a sequel isn’t the only thing that almost never happened. It seems we may not have seen the entire creation and ‘the more personal’ sequel of A Quiet Place if it weren’t for The Office. Here’s why!

The Office has done more than introducing us to Krasinski’s witty Jim Halpert — the creator, Greg Daniels, is also credited with the inspirational advice that heavily influenced the writer/producer/director during the creation of A Quiet Place.

“Obviously, that was a mockumentary, but it actually served me throughout my entire career,” Krasinski admitted. “And — not to overstate it, but it’s true: if he hadn’t told me that, I don’t think I would have done this movie. Because again, if I had gone into it thinking, ‘I’m gonna make a creature feature and horror movie,’ I would have failed miserably.”

Considering its influence on the creation of A Quiet Place, it’s not too surprising that Krasinski would give a nod to the show that not only led to some very important advice but basically jump-started his career in Hollywood.

The scene in question?

When Regan is showing Marcus the maps of nearby islands that could be transmitting the signal, the camera focuses on the nearby city Stamford, Connecticut, which happens to be a location Krasinski’s character Jim spent time at in The Office season 3. This was when Jim left Scranton, Pennsylvania, for a promotion at the Stamford branch after being rejected by Pam — though we all know he only stayed for the first half of the season.

The little Easter egg was far from coincidental if you ask any The Office fans who dedicated years to the show and its amazing cast.

Other clever references to influential shows/movies

That wasn’t all Krasinski had in store for viewers, though. Screenrant found some other notable “references to influential pieces” spread throughout the film that are worth knowing about.

There’s the reference to a sci-fi hit film where Marcus’ small-town little league game mirrors the local baseball game in Interstellar to a nod to Jaws with the sponsor by Brody’s Pizzeria, which “Krasinski revealed is a reference to Jaws’ (1975) Chief Brody.”

Then there was also the nod to Lost when Emmett and Regan found a group of people living normally while the rest of the world is seemingly going downhill. This is much like when Jack and the other victims of Flight 815 found the ‘Others’ on the island.

Finally, there was also a reference to 1979’s Alien with radio station’s street named ‘Nostromo’ (the spaceship in the movie), and The Last of Us video game with the dynamic father/daughter duo Emmett and Regan.