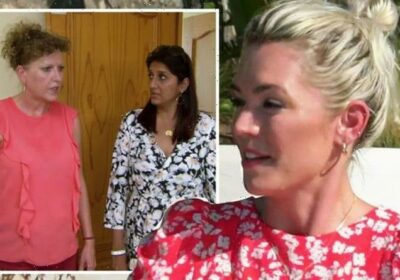 A Place in the Sun: Hopeful house hunters 'depressed' by apartment

Danni, 32, was on hand to help Sheila find the property of her dreams in the Benalmadena region of Costa del Sol and the A Place in the Sun guest was joined by her friend Hayley for support. With a budget of £135,000 to play with, the presenter had a few tricks up her sleeve to ensure the guest got what they wanted. However, when it came to reviewing property number four, the house hunter couldn’t help but feel “depressed” by what they were seeing, leaving the Channel 4 star deflated as her efforts hadn’t paid off.

The criteria Danni had to meet was ensuring there was lift access to the flat, there was access to a swimming pool, the property had plenty of space and views of the sea.

Danni got her thinking cap on and amongst the homes she wanted to show Sheila was property number four, a three-bedroom apartment which was on the market for £148,000.

It had been on the market for 13 months so the family who inherited it said they would be willing to go down to the top of the guest’s budget.

Situated on the first floor, the right buyer would have access to the communal pool, a large living room and dining room, as well as a separate kitchen.

Sheila and Hayley were allowed to look around the property on their own and although they liked it, they didn’t feel it was “the one”.

Meeting with Danni on the terrace, Sheila admitted she was feeling “a bit depressed” after the viewing, leading the presenter to ask why.

“Why are we feeling depressed?” she asked, with the guest explaining although she had wanted an extra room and more space, the kitchen was tiny in comparison to previous properties they’d seen.

The views of the sea weren’t the greatest either and so she told Danni it was going to be a firm no on the apartment.

Although baffled, it didn’t concern the property expert too much as she had got a better reaction from the other properties.

In particular, property number three was a real winner and it seemed Sheila would’ve put an offer on it but this time in the episode.

Why are we feeling depressed?

Situated on the ninth floor, the property was accessible via a lift and there was access to a communal pool below.

It came in under budget at £123,000 and Sheila told the presenter she was enticed because she liked a bargain.

With panoramic views of the sea and plenty of light and space in every room, it was hard for Sheila to find fault.

So much so, by the end of the viewing, the guest told Danni this was going to be the property to beat as she seemed likely to buy it.

One property she wasn’t too sure about was property number two, which was a sixth-floor apartment and had a wheelchair friendly swimming pool.

The two-bedroom apartment didn’t live up to her expectations, however, as the size of the bathroom was not big enough to move a wheelchair around in.

Reviewing the flat with her friend Hayley, Sheila said: “I’m a bit upset about this, I really wanted it to work for me.

“But it’s panicking me slightly. I’m not sure about that, the cubicle’s quite small and there’s no bathtub.”

They told Danni they weren’t going to rule the property out but wanted to see what else Costa del Sol had to offer.

After a gruelling search for the perfect home, Sheila was given the night to think about what she was going to do.

Sitting down with Danni, Sheila said she had ruled out every property bar the third one situated on the ninth floor.

The guest explained she had countless calls with her family in the UK throughout the night to come to a decision.

It was during these calls she discovered her mother had vertigo and would not be able to stay in a property at such a height.

She also said she didn’t feel comfortable letting her children get the lift down nine flights, bringing her to a conclusion.

Sheila told Danni she was going to increase her budget and visit the area again in the future for the right holiday home.

A Place in the Sun airs weekdays at 4pm on Channel 4.