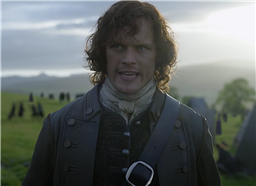 Outlander‘s battle scenes make for epic television. And it should come as no surprise the scenes take a long time to film. One Outlander battle scene, in particular, required creative problem solving while filming in Scotland. And according to one of the Outlander executive producers, the solution was to film the entire scene inside a tent.

Are there battle scenes in ‘Outlander’?

The rebellion and its accompanying battles are real historical events around which Outlander author Diana Gabaldon centered her books. Much of Claire and Jamie’s plot in the first two seasons of the Starz series are about trying to prevent Culloden from happening so Scotland can retain its independence from the British.

While Outlander isn’t 100 percent accurate at all times (it’s a TV show, creative liberties can be taken), the show’s battle scenes are some of the series’ most memorable. Outlander‘s Battle of Culloden episode is one of the most epic battle scenes TV has seen in years. But the Battle of Prestonpans in season 2 episode 10 was an equally epic precursor.

‘Outlander’s ‘Prestonpans’ episode was one of the hardest to film

In the first episode of the Outlander podcast, executive producer Matthew B. Roberts and Maril Davis shared behind-the-scenes info about the beloved show. And Roberts revealed Outlander Season 2 Episode 10, “Prestonpans,” was one of the most difficult scenes to film in the show’s history.

Prestonpans is known as the Jacobite rebellion’s first significant battle and victory. It occurred on Sept. 21, 1745, and lasted less than 30 minutes. In Outlander, Jamie and the rest of the army found a way to sneak up on British forces and attack. The battle happened before dawn, and in Outlander, the soldiers are surrounded by morning mist that helps shield their incoming attack.

Maintaining that dark, dewy environment was a vital part of the scene. To achieve it, Roberts said they filmed the entire battle scene in a tent. He said:

“The difficulties of ‘Prestonpans’ and how we were going to do that. We decided to build a huge marquee or tent and do the entire battle within that tent so we can control the mist and make sure it’s not windy during the four or five days that we’re shooting.”

Davis said it takes around 12 days to film one episode of Outlander, and season 2 was 13 episodes long. So spending five days on one scene alone is quite the task. And having to recreate the misty climate each day of shooting inside the tent must have required a lot of setup.

Where was ‘Prestonpans’ filmed?

Torbrex farm was also used as the filming location for Outlander‘s Battle of Culloden, which takes place in season 3 episode 1, “The Battle Joined.” Because they filmed “Prestonpans” in the tent, they were able to use the location again. When Claire visits the Culloden Moor memorial after she has returned to the future, she spends hours talking to the Clan Fraser memorial stone. They filmed at the actual Culloden Moor for this scene, where the battle took place on April 16, 1746.

Outlander Season 6 is currently filming in Scotland. The show has a large studio near Glasgow it has been using throughout the series. So while seasons 5 and 6 are set in North Carolina, the set is in Scotland. There were some memorable battle scenes in Outlander Season 5. And with season 6 taking place in 1775, the American Revolution is just around the corner.