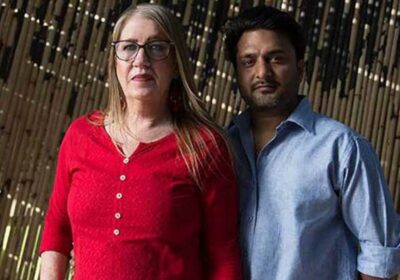 90 Day Fiancé’s Jenny is standing by her fiancé, Sumit, despite all the obstacles they’ve faced and her waiting to marry him for eight years. ET’s Melicia Johnson spoke to the seemingly unbreakable couple ahead of the season 3 premiere of 90 Day Fiancé: The Other Way, and Jenny reveals the only thing that would make her leave India and Sumit.

Jenny, 61, has forgiven Sumit, 32, for plenty of major problems in their almost 10-year relationship — from him Catfishing her when they first connected online to him secretly being in an arranged marriage without telling her — not to mention the intense opposition they’ve faced when it comes to his family and friends, given their significant age difference. In a preview of the new season, Jenny is shown throwing a chair in frustration due to Sumit yet again stalling when it comes to marrying her, even though her visa is set to expire. But Jenny tells ET that she has no plans of ever leaving Sumit.

Jenny says the only reason she would leave the relationship would be is if he no longer wanted to be with her.

“The only deal breaker would be if he told me, ‘I’m sorry, I will never, ever marry you, you should probably just go back to America and I’m just going to stay with my parents,'” she notes. “Maybe if he said something like that to me, then yeah, of course then I would leave.”

“I’ve been through a lot and I’ve put up with a lot,” she also says of her dramatic chair-throwing moment. “And I got to the point where, you know how it is, I can’t take it anymore.”

As for Sumit, he tells ET that he never had any doubts that his and Jenny’s relationship would last this long, though the chair-throwing moment did worry him.

“In love you have to push your limit,” he jokes, before getting serious about what has kept him and Jenny together. “I always feel like we love each other. The best thing is we listen to each other whenever it’s required and we understand.”

Sumit says his and Jenny’s relationship proves that “love can happen through anything.”

“It don’t see age, I don’t see gender, I don’t see countries, boundaries, limitations, and it can happen,” he says. “When I started talking to Jenny, I didn’t have any expectations to fall in love, and before that, I didn’t even know what love exactly is. First time I start loving someone and she’s 30 years older than me, that’s OK, that’s fine.”

“In order to get love, I need to stay strong and keep explaining, keep fighting for love, keep showing people that we are happy and that’s most important,” he continues.