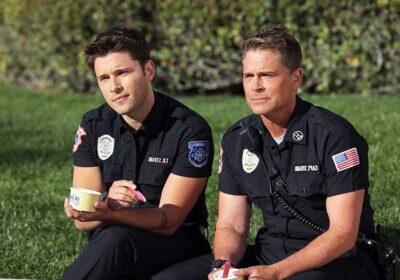 9-1-1: Lone Star actor Rob Lowe has scored himself a brand new role and while we can’t wait to see him in action, many are now wondering what it means for his future on the much-loved police drama.

It’s been revealed that the 58-year-old actor, who has been playing Owen Stand on the ABC show since 2020, is set to create and star in a new Netflix comedy series. Announcing the exciting news on Instagram: “Finally, it can be revealed! We are SO excited to get to work and bring this to you. @Netflix.”

MORE: See the cast of 9-1-1 and their real-life families

As the synopsis reads: “Set in a cutting-edge biotech research company, the series stars John Owen Lowe as socially-challenged son who goes to work for his very successful, wildly eccentric father, played by Rob Lowe, in order to save him from disaster.”

Rob’s followers wasted no time in congratulating him on the new show, with thousands taking to the comment section. “Congratulations! Can’t wait to see it,” one person wrote as another said: “Day made!

However, it wasn’t long before some fans began to speculate whether Rob could be poised to soon exit, just like fellow original co-star Liv Tyler.

“Amazing news!!!! Can’t wait so excited. But I hope @roblowe does not exit 9-1-1:Lone Star,” one wrote, while another said: “I hope this doesn’t mean you’re leaving Lone Star…” followed by a crossed fingers emoji. A third was thinking along the same lines and added: “You better not leave 9-1-1!“

However, 9-1-1 fans should rest easy as until we hear anything concrete from Rob or show bosses, we can expect to see him continue to appear on the show for the foreseeable future.