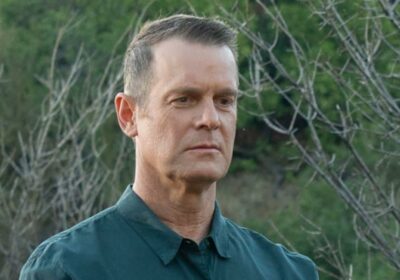 After Wendall reached out to Bobby – leading Bobby to voice his concerns for Wendall’s mental health – the 118 were called to what was thought to be a fire before they realized that it was a pyre, and the body of a man – Wendall – was underneath.

Wendall had recently spent time back in a rehab facility close to where his body was discovered, and as Bobby looks to get answers a mystery begins to reveal itself. Executive producer Kristen Reidel details the importance of this story for Bobby, and how the Grant-Nash family will come together to support their patriarch.

What made you decide to focus on someone from Bobby’s AA?

Kristen: Bobby is a character that is in recovery; it’s part of his life and it’s part of who he is. One of the reasons [for telling this story] was it gave us a chance to look at that part of him in a different light, as opposed to, ‘Will he or won’t he fall off the wagon?’

It was another way to explore what it means to be in recovery and the support system that you need and the kind of people that you surround yourself with.

In 6B, we’ll see Athena (Angela Bassett) and Bobby working together as a team to solve this mystery – and at a certain point, they bring May into it. It’s the family that solves crime together.

How do you decide which stories get a longer arc?

Kristen: It is a feeling. As we talk about stories, sometimes they seem like they could be longer and then you get in there and you’re just like, ‘Oh, that’s actually not that interesting, it doesn’t lend itself to multiple episodes.’

“But this one felt like something that could go a little bit longer, so we could get to understand Bobby’s relationship with Wendall a little bit more, and see how Wendll’s life and death had impacted Bobby.

May will be bought in to the mystery

6B will have flashbacks to Bobby and Wendall’s relationship?

Kristen: Yes, we will get to know Wendall a little bit better, and we’ll get to see Wendall’s relationship with Bobby a little bit more.

He was his sponsor for some time so it felt like we wanted to see who Wendall is and how he impacted Bobby the way that he did.

Exclusive: 9-1-1’s Oliver Stark opens up about vulnerability and why it’s okay to cry

Peter is also an executive producer

How involved are Angela Bassett and Peter Krause in determining where the show is going each season?

Kristen: They’ll always weigh in if they have thoughts or concerns but for the most part, they’ve always been very trusting of the writers and are willing to see what we come up with.

They do have their own thoughts and ideas once we’ve presented them with things but they do mostly go along and [like] being surprised at times.