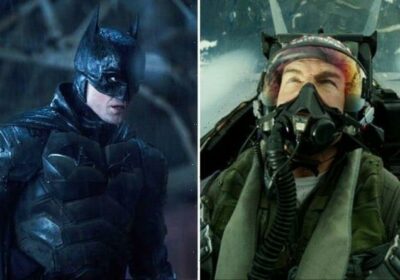 Scream (January 14)
Aka Scream 5. Set 25 years after the events of the first movie’s brutal murders, a new killer is wearing the Ghostface mask and starts targeting teenagers to unveil a small town’s deadly past.

Munich – The Edge of War (January 21 – Netflix)
Jeremy Irons stars as Neville Chamberlain in an adaptation of Robert Harris’ novel, following the 1938 appeasement talks with Hitler.

The Batman (March 4)
Matt Reeves directs Robert Pattinson’s incarnation of The Dark Knight as he takes on The Riddler and The Penguin with Catwoman.

Turning Red (March 11)
Pixar’s latest sees a 13-year-old girl finding herself turning into a giant red panda whenever she gets too excited.

Downton Abbey: A New Era (March 18)
A sequel to the first movie of the hit period drama series takes the Crawley family to a mysterious French villa connected to Maggie Smith’s Dowager.

The Lost City (March 25)
Sandra Bullock, Channing Tatum, Brad Pitt and Daniel Radcliffe star in a movie about a popular adventure novelist who finds herself being forced by an eccentric billionaire to lead him to an ancient city’s lost treasure.

Sonic The Hedgehog 2 (April 1)
The SEGA video game character returns for another adventure opposite Jim Carrey’s Doctor Eggman and Idris Elba as Knuckles.

Fantastic Beasts: The Secrets of Dumbledore (April 8)
The third Harry Potter prequel sees Eddie Redmayne’s Newt Scamander taking on the evil wizard Grindelwald once again, but with Johnny Depp having been recast with Mads Mikkelsen.

Operation Mincemeat (April 22)
Colin Firth stars in the true story of how the Allies in World War II planned an assault on Fortress Europe, while trying to protect their invasion force from entrenched German firepower.

Doctor Strange in the Multiverse of Madness (May 6)
Benedict Cumberbatch’s sorcerer teams up with Elizabeth Olsen’s Scarlet Witch in a Marvel multiverse epic.

Top Gun: Maverick (May 27)
Over 30 years since the original outing and Tom Cruise is back for Top Gun 2, in which the aviator finds himself training the late Rooster’s son. Val Kilmer will also reprise Maverick’s rival Iceman in the action drama.

Lightyear (June 17)
Chris Evans plays the fictional astronaut the Buzz Lightyear action figure from Toy Story is based on.