It takes a special (well, especially deranged) person to upend their life and move to a different country, even without the added chaos of a global pandemic. That’s why, when I heard whispers of a new Lily-Collins-moves-to-Paris Netflix series, I knew I was a shoe-in viewer. As an OG midwesterner who packed up two suitcases, rented an AirBnB, and flew to Paris with no plans whatsoever this past January, a show about someone doing approximately the same felt like a much-needed catharsis after a rocky ten months.

Yet, while the show was an entertaining romp through the city of lights, I couldn’t help feeling a bit disappointed by how many very real experiences were twisted or skipped entirely. So, for all of you who never asked, here’s a messy new expat’s take on just what Darren Star got wrong (and right). Fair warning, there are spoilers ahead!

Believe me, every ounce of my being wants to believe that Paris is the glam fashion city we all think it is. And sure, in some regards, it is. But shoe choice? In fact, in all my travels, I have never seen a city so hopelessly infatuated with sneakers as Paris. Even my NYC-approved fleet of black ankle booties stand out (in a bad way). Emily’s sky-high, brightly-colored “talons” would absolutely not fly.

Let me paint you a picture: NYC girl (hi, me) moves to Paris, thinks she understands the apartment game (in summary: you will never win!), and is still absolutely blindsided by Paris’s sparse offerings. If you’re like me, young(ish) and averagely-employed (to note: I have basically the same job as Emily), there’s a 92.5% chance you’re going to wind up on the right bank (AKA north of the Seine River). Your museums, your designers stores, your iconic Parisian monuments? Those you’ll find over on the left bank, where the elderly and rich folks roam. So Emily’s “chambre de bonne” (read: very normal-sized apartment that is definitely not a chambre de bonne) in the 5th arrondissement is…aspirational at best, unrealistic at worst. 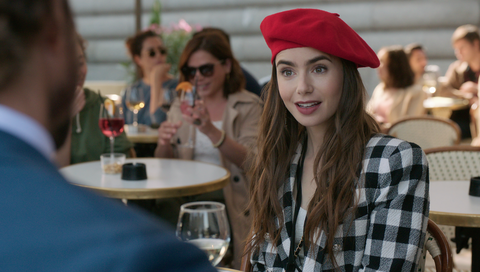 I kid you not, in the ten months I’ve been here, I have seen a grand total of one (one!) person wearing a beret. The simple fact that they’re sold at nearly every tourist shop within the Paris limits should tip you off to the fact that they’re anything but authentic.

If you’ve stayed in Paris for more than a week, you know the metro is an absolutely indispensable source of transportation. Honestly, the underground network surpasses its NYC counterpart. Slightly less erratic, remarkably clean, and wildly more convenient, the metro is a go-to resource for any resident looking to jaunt from one place to another.

Wrong: Men. So many (cheating) men. 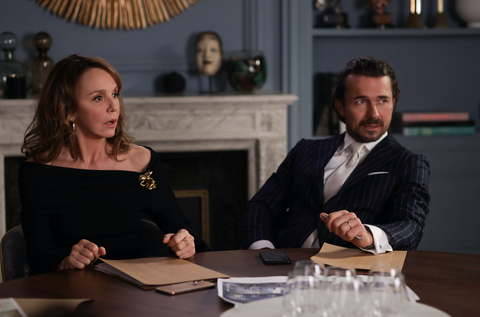 We all want to believe that if we just moved to another country, hoards of handsome men would fawn over us day and night. Granted, I’m not Lily Collins but the cliche of (tall!) gentlemanly French man obsessing over women at every possible moment is…exaggerated. Dating is just as difficult here as it is anywhere. And for the cheating cliché? Based on dozens of discussions with Parisians, the general consensus is they cheat just as often as us Americans (they’re just more willing to discuss it openly).

There’s a commonly-accepted global conception that “the French do not work hard.” Sure, it’s true that their social system allows for a slightly more lax approach to ambition overall, but one of the biggest shocks for me upon arrival was that Parisians (note: a species of their own) are alarmingly obsessed with their careers. Despite the romanticized version of a more balanced work-life relationship, they possess the same capacity for job judgement as us work-obsessed Americans.

I debated digging into this one, because to fully digest it would take a thesis of epic lengths; however, it’s a recurring theme that does deserve addressing. Many Parisians upon first encounter are…lukewarm, at best. Like most city-dwellers, when caught at an off moment, their aloofness feels abrasive for us earnest and eager-to-please Americans. But if you give them a bit of time, trust, and countless pathetic attempts at their impossible language, their temps do begin to rise. The less-than-subtle hazing that Emily’s colleagues display feels decidedly excessive, though. 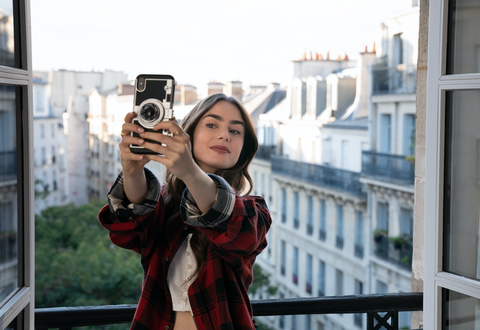 I know, I know. You thought about this one too. Is moving to another country and taking low-quality selfies in Parisian cafes really enough to skyrocket your social media following from 43 to 20K? In summary: hard no. Despite my personal relentless posting, this IG addict has still failed to crack 3K followers. I’m real-life proof that you stay lame, despite your location.

I hope the Mary Kate and Ashley fangirl within you is screaming, because yes—this bit is true. When Gabriel takes Emily on an impromptu scooter ride to chase down the American actress, I perked up. Scooters rule the streets, and—thank you for asking—my new french BF does have one on which I ride almost daily.

Drinking, smoking, sex—turns out the Parisians do love their indulgences. While not everyone smokes all the time, most do smoke sometimes. And as to whether or not I’ve imbibed before noon on more than one occasion? I’ll leave you with an elusive c’est possible. 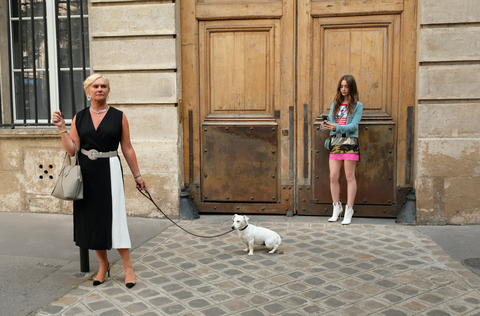 Neither too nice or too fearful of the wrath of others, Parisians exist in a disconcerting purgatory where the act of leaving dog poop on any and all sidewalks is, if not condoned, wildly tolerated. I’ve seen Emily in Paris reviews that reprimand Darren’s use of lazy clichés, but I’m sorry to announce that this cliché is … disparagingly true.

I still don’t understand the science behind it, but the French have a mind-blowing ability to whisper at all times. Yes, I have 100% been reprimanded for the volume of my voice by servers while dining with my expat friends.

Right: The absolute relief of finding an American friend

One scene in the series has stuck with me since the moment I saw it. In it, Emily meets with Judith Robertson, the representative from American Friends of the Louvre. Together, they commiserate over the absence of “that R sound” and mock the French’s “dry-heaving” pronunciation of their respective names (“Row-bair-sohn”!, “Coop-air”!) Perhaps the most poignant, relatable and tangibly honest scene in the series, their mutual need for American comfort was visceral. The absolute, first-deep-breath-in-months, tears-to-your-eyes laughter that comes from mocking the French with another English-speaking expat is one of the greatest, unexpected joys of moving to another country. Petty? For sure. Accurate? Absolutely.