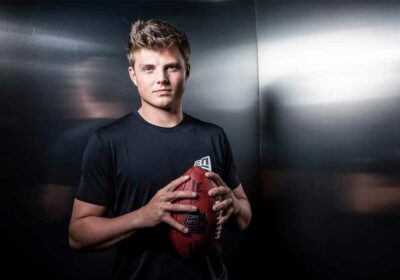 Falcons have made up their mind on crucial draft pick

Top NFL draft busts of all time — where are they now?

Brayden Cosper lived with Zach Wilson at BYU for the last 2 ½ years.

Cosper, a wide receiver for the Cougars, would arrive home sometimes to find Wilson waiting for him, ready to play Pingpong.

Soon, Cosper would find himself in a marathon session of Pingpong, because Wilson would not leave the table until he won.

“The next thing you know, we play best-of-three and I end up beating him and we’re playing like 20 games of Pingpong,” Cosper said. “He’s got to win a series.

“He’s definitely super competitive. He wants to be the best.”

That competitive spirit is one of the things the Jets love about Wilson, and they are expected to select him Thursday night with the No. 2 overall pick in the 2021 NFL Draft.

The Jets will become the first team in the common draft era to select two quarterbacks in the top three within four years of each other. Wilson will replace Sam Darnold, who was chosen No. 3 overall in 2018, and will become the latest quarterback to try to fill the void left by Joe Namath in the mid-1970s. The Jets have selected Richard Todd, Ken O’Brien, Chad Pennington, Mark Sanchez and Darnold in the first round since then, and none of them led the Jets to a title.

Wilson is a remarkable story. A year ago, he was in a three-way competition for the starting job at BYU. After a tremendous 2020 season in which he threw for 33 touchdowns and had just three interceptions, he is now considered to be the second-best quarterback in this draft, behind Trevor Lawrence.

Not everyone is convinced Wilson will be the answer for the Jets, though. He will have the pressure to perform better than Darnold, who was traded to the Panthers, as well as the other top quarterbacks in this draft that the Jets are passing on: Justin Fields, Trey Lance and Mac Jones.

The biggest question about Wilson is the quality of competition he faced in 2020, when he showed major improvement from his previous two seasons as the starter. The Cougars are an independent and COVID-19 forced them to scrap their original schedule and take whatever opponents they could get. Wilson did not face one Power 5 team.

“I have concerns about Zach Wilson,” Dan Orlovsky, a former NFL quarterback and current ESPN analyst said. “I think his job of playing quarterback was the easiest out of the big five [quarterbacks in the draft] last year.

“I think his team was dominant the most, when it comes to their competition. I think that he wasn’t tasked with the burden of playing quarterback and the difficulty that comes with it last year, as much as the other quarterbacks — or as much as what the reality of the NFL will be.”

Wilson will be the first of 10 picks Jets general manager Joe Douglas has in this year’s draft. Douglas has spent his first 22 months on the job building to this moment. Now, he will put his stamp on the Jets’ roster.

Douglas acquired the No. 23 overall pick from the Seahawks when he traded Jamal Adams last summer. With that pick, Douglas can go in a number of directions. Cornerback, guard, linebacker, edge rusher, running back and wide receiver are all possibilities. If a player like USC guard Alijah Vera-Tucker or Notre Dame linebacker Jeremiah Owusu-Koramoah falls to them, the Jets would be hard-pressed to pass on that kind of talent. But Douglas could opt for a cornerback, such as Northwestern’s Greg Newsome II or Virginia Tech’s Caleb Farley, to shore up a weak position.

Douglas is armed with plenty of ammunition to move up or down in this draft if he chooses. Ultimately, though, this one will be remembered for Wilson and how he pans out.

“You’ve heard me say it’s the most important position in sports, and there’s a lot that goes into it,” Douglas said of evaluating a quarterback. “And obviously there’s the physical traits that go into it: the arm talent, the athleticism. Then there’s the intangible traits: the intelligence, the leadership, the mental toughness, the physical toughness. So, there are really so many traits that go into every quarterback evaluation. And ultimately those traits are so important in determining a quarterback’s success.”