Yankees drop another one to Red Sox as freefall continues 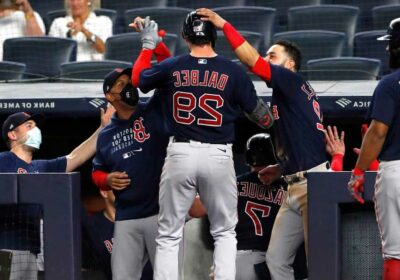 The other side of new Yankee’s promotion

Yankees finally call up hard-hitting slugger: ‘They need you’

Less than two weeks ago, the Yankees finished off a sweep of the AL Central-leading White Sox. They had won six in a row and looked ready to take off.

Instead, they really never got airborne.

After Saturday night’s dismal 7-3 loss to the Red Sox in The Bronx, the Yankees have lost nine of their last 12 games, and they have failed to win any of their four most recent series.

Most concerning, they have continued to struggle against AL East rivals. The Yankees now are 14-21 against those teams and 2-4 against the Red Sox and Rays on this seven-game homestand.

They couldn’t hold an early lead, and one of their strengths — the bullpen — was flattened by Boston. Chad Green was lit up for four runs in the eighth inning and the offense remained underwhelming. Giancarlo Stanton heard boos after falling to 2-for-23 with 11 strikeouts since coming off the injured list as the Yankees (31-28) fell to fourth place in the AL East, 5 ¹/₂ games behind the division-leading Rays.

Enrique Hernandez’s two-out, eighth-inning double off Green started the game-deciding rally. With Rafael Devers in motion, Hernandez turned around a 95 mph Green fastball and laced it into the left-field corner. Devers came all the way around from first to score the go-ahead run. To add insult to injury, Christian Vazquez poked a double just inside the first-base bag to score Hernandez and Bobby Dalbec followed with a monstrous two-run home run that traveled 453 feet, according to Statcast.

When Dalbec’s bat contacted the ball, a gasp was heard from the crowd. Boos soon followed, and Green was lifted following his worst outing of the season as his ERA skyrocketed from 1.93 to 3.14.

Yankees starter Jameson Taillon was cruising entering the sixth. He had allowed just three hits and had retired 10 of 11 batters. It all turned with a soft opposite-field single by Alex Verdugo.

Xander Bogaerts followed by hitting a catchable drive to deep left. Miguel Andujar, an infielder playing the outfield, couldn’t make the play up against the wall. Devers then pulled the Red Sox even with a single to right and Marwin Gonzalez greeted reliever Jonathan Loaisiga with a soft double just past Chris Gittens at first base.

Loaisiga did well to keep the Red Sox there by striking out Hernandez and getting Vazquez on a popup. In the following frame, Gleyber Torres’ sacrifice fly, which plated Aaron Judge, made it 3-all. Loaisiga worked out of more trouble in the seventh by getting Bogaerts to line into a 5-4 double play with two on and one out.

The Yankees struck first in the home fourth. After a Gio Urshela single, Torres drilled his third homer of the year, a 418-foot blast into the second deck in left field. The drive was just Torres’ second extra-base hit in his past 13 games, symbolic of the Yankees’ offensive struggles.

Despite the sixth-inning unraveling, Taillon continued his recent string of improved pitching. Over his last three starts, the right-hander has allowed six earned runs over 15 ¹/₃ innings. That averages out to a 3.52 ERA, far better than his current 5.09 for the season. Getting more length is the next step for the newcomer to ease the already heavy load on the bullpen.