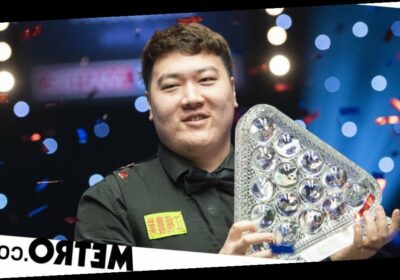 Winning the Masters at 20-years-old is one of the most remarkable snooker achievements in recent memory, and it might just be enough to convince the experts that Yan Bingtao’s substance over style approach is one that deserves the ultimate respect.

Yan was making his Masters debut this year and scrapped his way to the title, demonstrating plenty of quality, but even more of his incredibly calm, nerveless demeanour.

His first three games came against grizzled veterans of the baize and all went to deciding frames, a situation in which you would normally fancy the more experienced player.

The youngster defied the odds each time and saw off Neil Robertson, Stephen Maguire and Stuart Bingham to make it to the final where he would face the craftiest of old-stagers, the ultimate test for a young player’s game, John Higgins.

The Chinese sensation had been the underdog in his first three contests and was so again as he took on the Wizard of Wishaw, but this time he got the job done without going all the way to a decider, downing the four-time world champion 10-8 as he, remarkably, showed the more composure of the two men.

Yan is not the heaviest scorer, not the most fluent break-builder, but he has an incredible serenity of mind for a man who wouldn’t be served a beer in the US.

Three straight deciding frame victories is no fluke, and finding himself 5-3 and 7-5 down to the great Scot in the showpiece would rattle most 20-year-olds.

Not this one, though, as even when he missed a simple shot near the climax of the contest, sat in his seat and yawned as if he was thinking as much about his cup of tea before bed as he was the Masters final.

Anyone and everyone involved in snooker knows that the lion’s share of the game at the top level is between the ears, but presented with the personification of that theory in Yan, some pundits appeared baffled.

Yan is still extremely talented, you don’t reach the top 16 in the world without immense skill, but his mental strength is his real trump card, as his his respect for the tactical and safety side of the game.

Greats of the sport were not sure about him as recently as last summer, though, with the two finest players in history questioning just how good he is and could be.

Ronnie O’Sullivan told Stephen Hendry on Instagram over the first lockdown of 2020: ‘Bingtao, I think, is a bit limited. He don’t know what he is.

‘He’s got a very good temperament. He’s a percentage player, he ain’t going to set the world on fire. Not a fan of him, really.’

Hendry conceded that he clearly holds a winning mentality, but still found him a difficult player to assess.

‘Bingtao I don’t know what to make of him,’ said the Scot. ‘I don’t know whether he’s attacking, defending, he’s turned into a bit of a plodder.

‘I said, “that’s not acceptable mate, you should be getting whips.” I tried to explain to him to try and get near to the ball. Just better positional play. He’s a quick learner, and he got it, it’s just little things like that he needs to improve.

Yan does know the game and there is little doubt that he will be winning titles regularly from here on in, if he can keep up the immense will to win he has shown in Milton Keynes.

This is no criticism of the pundits who questioned Yan, he has been something of a conundrum, and innate talent with a cue is much easier to see than an iron will and ability to hold nerves at bay.

Those qualities have been very clear to see at the Masters, though, as were some moments of supreme skill.

Yan’s clearance of 59 to take the ninth frame against Higgins to a re-spotted black was absolutely stunning, as was his ability to knock in the long, tricky black to win the frame.

His career-high break of 141 in the deciding frame against Maguire was immense, and while those big centuries are not that regular for him, his ability to make well-timed breaks of 60 and 70 win him an awful lot of frames.

He may not be a typical young player, but less than a year after O’Sullivan famously blasted the young talent in the game, maybe he is a new breed that snooker needs.

Yan is indeed a conundrum and one that no one has been able to solve at the Masters and many more will struggle to solve in a long career ahead of him.

The Rocket has certainly been won over by the Tiger, going from his stance of ‘not a fan’ just a few months ago to making big predictions for his future.

‘I just think he’s going to get stronger and stronger and it will bring other players through as well,’ O’Sullivan said after Yan’s Masters win.

‘I’d be very surprised if he doesn’t win at least one or two world titles.’

Yan has changed a few tunes thanks to his dogged determination and brilliance, it is now up to him to prove the Rocket right and become world champion.