Home » Sport » WNBA Power Rankings: Sparks up, Liberty down and Sky still No. 1

WNBA Power Rankings: Sparks up, Liberty down and Sky still No. 1 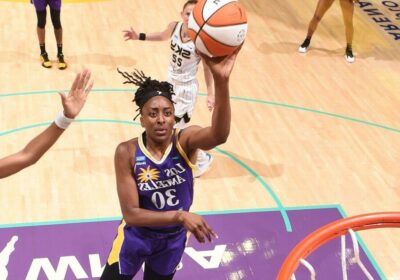 Los Angeles Sparks forward Nneka Ogwumike turned 32 on Saturday, but the way she has played during the 2022 WNBA season, she has looked more like she’s 26 again. That was her age in 2016 when she won the MVP award. Ogwumike has led the Sparks into the top six in this week’s ESPN WNBA Power Rankings.

The Sparks have had their issues, including coach/general manager Derek Fisher being let go in early June and a brutally road-heavy early schedule. But they are 4-2 since June 21, their only losses to the Chicago Sky and Las Vegas Aces, who are 1 and 2 in the standings. On Friday, Los Angeles — one of three “original eight” teams that is still in the city where it started in 1997, along with the Phoenix Mercury and New York Liberty — became the first WNBA franchise to win 500 games.

The Sparks have had moments the past two weeks when they’ve reminded everyone to keep an eye on them. Sunday, for instance, the post trio of Nneka Ogwumike, Chiney Ogwumike and Liz Cambage combined for 50 points on 70.4% shooting and 24 rebounds in an 84-74 victory over New York.

Los Angeles plays twice more before Sunday’s All-Star Game, including Monday (7 p.m. ET, ESPN) against Phoenix. When the Sparks’ inside game performs the way it did this past weekend against New York and Dallas, Los Angeles is tough to stop.

“Our frontcourt, we just take the game very seriously,” Chiney Ogwumike said after a double-double Sunday, her second of this season. “Our goal is to play well with each other no matter who is out there.”

The Ogwumike sisters, of course, have played together since childhood. Adding Cambage into the mix this season is another twist, but one they have gladly embraced. Cambage’s two double-doubles last week were the first time she had a double-double since May 8.

“It’s taken us time to figure out how do we want to pass the ball to each other, how do we want to come off of screens,” Chiney Ogwumike said. “I think we’ve finally nailed the communication part. It’s kind of cool when you have a team where everyone can talk and contribute, and we can get results in real time.”

Nneka Ogwumike will be an All-Star starter Sunday (1 p.m. ET, ABC) in Chicago, as she is averaging 18.6 points and 7.2 rebounds while shooting 57.6% from the field. The No. 1 draft pick in 2012* hasn’t had anything close to a “bad” season in the WNBA, but the past two in particular have been taxing emotionally and physically.

The 2020 COVID-19 bubble season required a lot of leadership and problem-solving well beyond her on-court responsibilities. Last year, she dealt with a knee injury, her controversial omission from the U.S. Olympic team, her unsuccessful battle to play for Nigeria in the Tokyo Games and having to try to carry a bigger load with Candace Parker’s departure.

Nneka Ogwumike remained an elite-level player through it all. But Chiney Ogwumike, whose biggest battle since also being drafted No. 1 (in 2014) has been injuries, thinks her sister is enjoying the game more this season.

“Her favorite word is ‘grace,’ and I think she does it really gracefully,” Chiney said of Nneka’s ability to balance everything. “My wish as a sister was for her to just play basketball this year. Not feel like she has to be everything to everyone. She’s been able to do that, and look what happens.”

The Sky went 2-0 against Connecticut and Phoenix, scoring 91 points and shooting better than 50% in both games, and even more firmly sit in the top spot in the Power Rankings, their second week in a row in that position. They will have four representatives in the All-Star Game in Chicago, and it is an exciting time for the hosts. Chicago is on a five-game winning streak and has won eight of its past nine.

This week: at Minnesota (Wednesday), at Indiana (Thursday)

The Aces had a taxing week with four games on the road. They broke even, beating Los Angeles and Minnesota, and losing to Seattle and their rematch with the Lynx. After starting 13-2, the Aces have lost four of their past six — a stretch that began when they let a 28-point lead over Chicago get away on June 21. The All-Star break might be coming at a good time for Las Vegas to reset. In a bit of a scheduling quirk, the Aces play their next three games against the Liberty, two coming in New York after the All-Star Game.

This week: vs. New York (Wednesday)

Slow starts were an issue this past week for the Sun, who went 1-1 and were outscored a combined 58-35 in the first quarter against Chicago and Washington. The good news for the Sun was they overcame their deficit to win Sunday in overtime against the Mystics. Coach Curt Miller talked about that being more a matter of heart and effort than huge strategic changes. He thinks that rally came at an important time and will positively impact that Sun down the line.

This week: at Dallas (Tuesday)

The Storm went 2-1 in their first week with center Tina Charles, who totaled 15 points and 15 rebounds in three games while shooting 33.3%. The Storm looked good in victories over Las Vegas and Indiana at home but appeared fatigued in a loss at Atlanta on Sunday. Breanna Stewart acknowledged that but was also pragmatic about it: “I think our vibe and our feeling within the team is really, really good. It’s tough, but this is the WNBA, and we know the schedule is condensed. No matter what, each player should have brought a little more energy.”

This week: at Indiana (Tuesday), at Los Angeles (Thursday)

It was almost a really good week for the Mystics, but letting Sunday’s game at Connecticut get away stung. After beating Atlanta earlier in the week, it looked as if Washington was going to steal a win on the road at Connecticut without Elena Delle Donne. But the Sun have proved resilient when down, and they came back from a 15-point halftime deficit to win in overtime. These are the kinds of games that could haunt the Mystics, who are 3-4 since June 16.

This week: at Atlanta (Wednesday)

The Sparks went 2-1 this week. We addressed their post success earlier, but the guards and wings have had to do their job, too. Lexie Brown is the lone guard who has seen action in every game for the Sparks; she has been a strong force on defense along with Brittney Sykes. Jordin Canada returned to action Friday after missing two games with a non-COVID-19 illness; she had 11 points and seven assists Sunday. Katie Lou Samuelson, in her first year with the Sparks, is having the best of her four WNBA seasons, averaging 10.5 points and shooting 41.3% from 3-point range.

Veteran Kristi Toliver has played seven games and left early Sunday with a calf issue, although coach Fred Williams said he didn’t think it was serious. Chennedy Carter, though, remains an enigma; she last scored in double figures on June 5 and didn’t play Sunday. Williams said she had tweaked her left knee.

This week: vs. Phoenix (Monday), vs. Seattle (Thursday)

Things are looking up for the Dream, as they went 2-1 and veteran guard Tiffany Hayes made her season debut with 21 points in beating New York in overtime on Thursday. Guard Erica Wheeler, who had been out six games with a foot injury, came back this week and hit the 3-pointer that sent that game into OT. Forward Cheyenne Parker had a season-high 21 points in beating Seattle on Sunday.

This week: vs. Washington (Wednesday)

The Lynx went 2-1, highlighted by a dominant 102-71 win over Las Vegas on Sunday in which Aerial Powers had a career-high 32 points while Minnesota hit a season high with its point total. Minnesota is making up ground, going 4-2 since June 21. That’s more victories than the Lynx had in their first 16 games (three). Five different players have led Minnesota in scoring in this recent six-game stretch, and none of them were Sylvia Fowles. The depth of the Lynx is starting to come around.

This week: vs. Chicago (Wednesday)

The Mercury went 2-1, a solid response to losing Tina Charles, even if the two wins were over last-place Indiana. But that was overshadowed by Skylar Diggins-Smith’s “clown emoji” Twitter response to coach Vanessa Nygaard’s comment that it wouldn’t be an All-Star Game without Diana Taurasi. Was it a clumsy statement by Nygaard in trying to pump up one of her players? Yes, of course, as it insulted the players who are All-Stars. However, Nygaard also had complimented Diggins-Smith in the same news conference for being an All-Star. For the Mercury’s sake, this could have been hashed out privately between player and coach.

This week: at Los Angeles (Monday), vs. New York (Thursday)

New York took a tumble in the Power Rankings after going 0-2 with losses to Atlanta and Los Angeles. Erica Wheeler’s buzzer-beating 3-pointer for the Dream to send Thursday’s game into overtime, and the Liberty’s disappearance in the extra period, were a perfect example of how quickly a victory can be snatched away in the WNBA. Whatever hangover from that irritating defeat there was in Sunday’s loss at Los Angeles, the Liberty need to shake it off with two more Pacific time zone games coming up before All-Star weekend. Bouncing back from games you think you should have won is critical in this league.

This week: at Las Vegas (Wednesday), at Phoenix (Thursday)

Like Diggins-Smith, Dallas’ Isabelle Harrison used social media to question her coach this week. The Wings went 0-2, and Harrison clearly wasn’t happy with her playing time: 17 minutes in a loss to Minnesota and nine minutes in a loss to Los Angeles. Things seemed to be jelling two weeks ago for the Wings, but they now have lost four of their past five, with the lone victory being against last-place Indiana.

This week: vs. Connecticut (Tuesday)

You don’t want to call it a season in early July. But short of a miraculous turnaround, the Fever — who went 0-3 this past week — will miss the playoffs for a sixth consecutive year. The focus needs to remain on young players’ development. Rookie Queen Egbo got her second double-double of the season in Friday’s loss to Seattle, but the Fever scored a season-low 57 points.

This week: vs. Seattle (Tuesday), vs. Chicago (Thursday)