Home » With Zach Wilson, the Jets hope to end their decades-long QB search.

With Zach Wilson, the Jets hope to end their decades-long QB search. 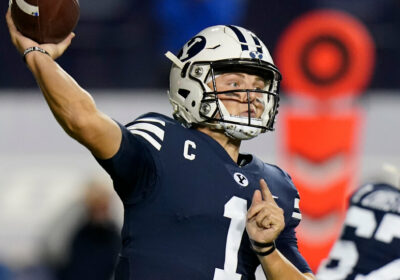 The Jets used the second pick in the draft to select Zach Wilson from Brigham Young, hoping that their long search for a franchise quarterback is over.

In draft class rich at the position, Wilson stood out in his stellar junior year, when he threw for 3,692 yards and 33 touchdowns and just three interceptions in 12 games. He also ran for 254 yards and 10 touchdowns. After relatively pedestrian freshman and sophomore seasons, Wilson finished eighth — fifth among quarterbacks — in the voting for this year’s Heisman Trophy. Wilson, at 6-foot-2 and 214 pounds, hopes to build on that momentum with the Jets and prove that his junior year was no fluke.

“These guys need a good quarterback, a good leader, and I think I got those qualities,” Wilson said after he was chosen. “I can’t wait to go in there.”

It was the second-highest the team had drafted a quarterback, behind the selection of Joe Namath, who was taken first over all in the 1965 A.F.L. draft. The Jets’ inability to find a franchise quarterback capable of leading them back to the Super Bowl has defined them ever since.

The team has often used first-round picks to try to fill the position, as it did with Richard Todd in 1976, Ken O’Brien in 1983, Chad Pennington in 2000 and Mark Sanchez in 2009. Most recently, Sam Darnold was selected with the third overall pick in 2018, but his tenure with the team ended with his being traded to the Panthers this spring after compiling a 13-25 record over three seasons.

The desperation to draft a star quarterback has accelerated in recent years. Wilson is the sixth quarterback the Jets have selected in the first two rounds of the draft since 2006, according to Pro Football Reference. (Denver, Cleveland and Miami took five each heading into this year.)

Like Darnold, Wilson arrives with high expectations and a lot of work ahead to revive a franchise that went 2-14 last season and hasn’t made the playoffs since the 2010 season, the longest postseason drought in the league.

Robert Saleh, the team’s new head coach, said last week that he had no qualms about starting Wilson right away.

“I don’t think there’s risk,” Saleh told NFL Media. “I’m very comfortable with every decision that’s made, and it’s our job to put him in the best position to be successful.”

Ahead of the draft, Wilson reportedly spoke with Pennington, Sanchez and Josh McCown, a veteran quarterback who played parts of two seasons with the Jets, to get a feel for what it is like to play in the country’s biggest media market and in front of victory-starved fans.

Wilson joins a Jets team in full transition. Saleh, a first-time head coach, spent four years as defensive coordinator of the San Francisco 49ers before the Jets hired him this off-season. Last year’s Jets had the worst offense in the N.F.L. and the second worst passing game, which General Manager Joe Douglas has tried to improve by signing receivers Corey Davis and Keelan Cole, as well as running back Tevin Coleman.