Home » Sport » With Each Run, a City Shaken by Racism Is ‘Finding the Greater Good’

With Each Run, a City Shaken by Racism Is ‘Finding the Greater Good’ In 2006, William Jones III moved with his wife, Yolonda, to Charlottesville, Va. Two years before, Jones, who is Black, had started jogging regularly. But when he looked around Charlottesville, he saw only white people running.

So, he designed an almost five-mile route running through the city’s predominantly Black neighborhoods, beginning and ending at the Jefferson School, a community center that in 1926 had opened as the first high school in Charlottesville for African-Americans.

Jones would see Black men sitting on their front porches. As Jones jogged by, he said, they’d call out, “Good work!” and, “Man, I can’t do that!”

“I knew it was significant,” Jones said. “They didn’t say, ‘I really appreciate you,’ but it was like, ‘We see you, Will!’ And not just that they saw me, but that they saw something different.”

Over the last 15 years, the route Jones crafted has come to host the most racially diverse running group in the city. In creating the ProlyFyck Run Crew — named for the Nipsey Hussle “Victory Lap” lyrics, ‘I’m prolific/ so gifted /I’m the type/ that’s gon’ go get it,’ — Jones has helped build community amid one still reckoning with the racial trauma of August 2017, when white supremacists held violent rallies in Charlottesville.

This year, as people across the nation protested acts of police brutality and racial injustice in response to the killings of Breonna Taylor, Ahmaud Arbery and George Floyd, who are Black, the run crew has grown, with up to 75 runners on some mornings.

“After all the social unrest this year, this community has been looking for ways to connect,” said Wes Bellamy, a Black former Charlottesville City Council member and a ProlyFyck co-founder. “We are a city that believes in the power of working with each other, of rallying together and finding the greater good.”

Jones, who personifies running when talking about it, said: “During Covid, I said to Run, if you allow me to, I’ll show you off.

“Because it can change lives,” he continued. “It’s that significant to us as human beings.” 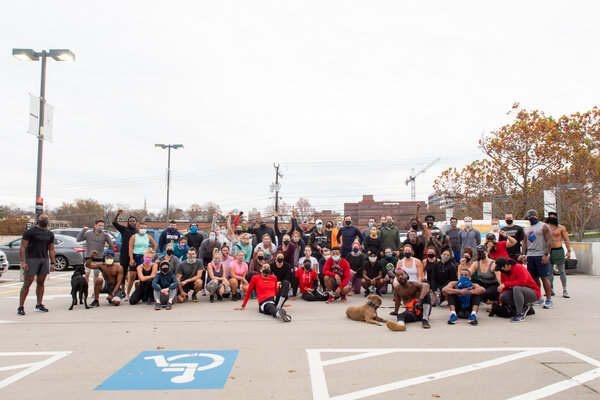 For several years after mapping his route, Jones ran alone. He’d often invite clients from his barber shop to join him, including Bellamy, the head of the political science department at Virginia State University and the author of “When White Supremacy Knocks, Fight Back!”

Bellamy was not a runner, but after hearing Jones talk, Bellamy agreed to join him in February 2019. He was exhausted after the first run. But he came back to the next run, and the next.

“I saw that if we ran, people would be out, waiting for us, cheering, wanting to join us,” Bellamy said.

By 2018, several people had joined. The group, which was mostly young, Black men, called itself Run These Streets. In the spring of 2019, the group changed its name to ProlyFyck, which Jones patented with a business partner.

Around that time, James Dowell was ready to run. Whenever Jones had invited Dowell, whose brother worked at the barber shop with Jones, to run, he gave the same response: I’m not a runner. But like Bellamy, Dowell finally acquiesced, on a rainy, cold day in the spring of 2019.

“I got dragged up the hills and I hated it,” Dowell, 27, said. “But I finished. I don’t know how in the hell they got me back out there, but I went back.”

Dowell pushed himself and others. “Let’s go! You are doing this!” he yelled at full volume, jogging alongside others and skip-stepping with energy.

“I grew up in these neighborhoods,” said Dowell, who is Black. “When I first ran through, I thought to myself, who would’ve thought the kids I’m running past would grow up and try to do something positive for the neighborhood, where so much negativity is going on?”

Kat Lawrence didn’t see any Black runners when she moved to Charlottesville on Aug. 11, 2018, the one-year anniversary of the white supremacist rallies. She had started running a few years before she moved and had finished her first half-marathon in Chicago in 2016.

But it took her four months to start running outdoors in Charlottesville. “There was so much uncertainty on that day,” she said, adding, “It was terrifying for me as a Black woman.”

In April 2019, Lawrence’s mother Angie traveled to Charlottesville to cheer her on in the city’s annual half-marathon. She joked with her daughter that it wasn’t hard to spot her: Out of 536 female half-marathon entrants, Lawrence said she saw only two other Black women running.

Kat Lawrence, 28, was part of a GroupMe chat for Black people in Charlottesville. That May, a member mentioned a group that was running, starting at the Jefferson School, a few mornings a week. The following Monday, Lawrence drove to the school at 6 a.m. Seeing a group of nine male runners, seven of whom were Black, she rolled down the window.

“Yeah, come on!” they replied.

As they began jogging, she watched as children ran out of their houses, waving. “That was my favorite part — I don’t know if these kids see people who look like them running through their neighborhood,” Lawrence said. “That’s a powerful moment for everyone involved.”

In 2019, if the group had a dozen runners one morning, they considered it a big turnout.

But in 2020, as the pandemic spread and the Black Lives Matter movement gained momentum across the country, more runners began to arrive each Monday, Wednesday and Friday at 6 a.m. Twenty people, 30, sometimes 40 or even 50.

“Everyone is genuine and serving the same purpose; it’s diversifying the community in a different way than Charlottesville has really seen,” Dowell said.

The first to depart are the walkers, who are called “Cruisers.” At two designated spots — both after steep hills — the faster runners wait and cheer for the slower-paced ones, until the entire group has gathered. Then, they resume.

Along the way, residents stand on apartment balconies, clapping and waving. One older Black woman greets the group every morning as she waits at the bus stop, offering fist-bumps and high fives. Sometimes, residents run out of their homes to join the group on their route.

At the conclusion of each run, the group often gathers in a circle and several people will speak. Most Friday runs are dedicated: One morning, they ran for a group member whose son had been killed in a motorcycle accident. Another Friday, the run was dedicated to a member whose aunt had died of cancer the day before. They have honored veterans, underdogs and safety for women through themed runs.

On Aug. 12, ProlyFyck adjusted its route, stopping at the corner of Fourth Street and Water Street, where Heather Heyer was killed by a white supremacist who drove his car through a crowd three years earlier. The group stood together, listening to Bellamy speak before they shared a moment of silence.

“I think the social unrest and this awakening to racism for a lot of white people has been a big push of, ‘What are tangible things I can do?’ ” said Emily Keenan, who is white and a regular runner with ProlyFyck. “This is an important place for people to run through new spaces, learn and come together. Especially in a time when it’s hard to do that.”

Sarah Messer, 32, learned about ProlyFyck from her sister-in-law. She decided to show up one morning in late July — and has yet to miss a single run since.

“The energy was so infectious,” Messer said. “They say, no person left behind, and it’s true. It’s so encouraging because everyone cheers loudly along the way. They remind us, ‘it’s about your story and what you’re here to do.’”

Earlier this year, Messer’s father, Rick, was diagnosed with prostate cancer. In November, she asked if a run could be dedicated to him. The group held a Run for Rick, taking pictures and sending him messages of hope and support three days before he had surgery. The outpouring of love, she said, moved him to tears — only the third time she had seen her father cry.

“We hear how people are feeling — they express themselves here,” Jones said. “We have always approached this as a cultural shift: How can we change the culture of Run in this community? We are impacting people’s lives through running. Even people not in the run crew, who are just watching us.”