With Biggest Stars Absent, Miami Open Serves Up Some Chaos 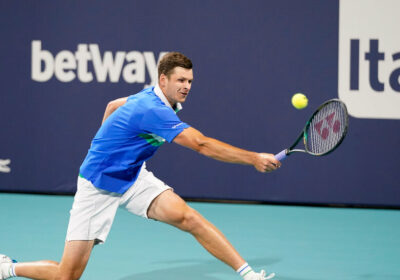 MIAMI GARDENS, Fla. — So what exactly happened at the Miami Open over the past two weeks?

Other than the top-seeded Ashleigh Barty walking away with the women’s singles title, something like tennis chaos unfolded at the only significant tournament in North America until August.

Where to begin? Naomi Osaka, a four-time Grand Slam event winner, lost a match for the first time in more than a year, and on a hardcourt, a surface it seemed she might never lose on again. After the men’s Big Three — Roger Federer, Rafael Nadal and Novak Djokovic — skipped this tournament, Jannik Sinner of Italy and Hubert Hurkacz of Poland, close friends and doubles partners, dueled in their first ATP Masters 1000 final. Hurkacz blew past Sinner, a player experts have tapped to be an eventual No. 1, 7-6 (4), 6-4.

Barty and Bianca Andreescu, who won Grand Slam events in 2019 but barely played in 2020, gave notice they were just about fully back as they met for the first time in the women’s singles final. A 20-year-old with top-class tennis DNA named Sebastian Korda, the son of the former world No. 2 Petr Korda, made the final eight and was the last remaining American.

The top two men’s seeds, Daniil Medvedev and Stefanos Tsitsipas, lost in the quarterfinals. Alexander Zverev, the No. 3 seed, lost in the second round after having a bye in the first. Andrey Rublev was the only player in the top 10 of the ATP Tour rankings to make the semifinals, where he lost to Hurkacz in straight sets.

In short, Miami provided a glimpse of a tennis future that does not include Federer, Nadal, Djokovic and Serena Williams, who withdrew from the event after oral surgery: a sport of surprise and entropy.

“Everyone can win now,” Rublev said after his quarterfinal win over Korda. “It’s not about ranking.”

Rublev was talking about the tournament’s final rounds, but he could have meant the sport. Djokovic and Nadal are still nearly indomitable at big events, but when they skip one, all bets are off. (Federer, 39, has played just one tournament since his two knee operations last year.)

Bernard Tomic of Australia said earlier this year that there was not much difference between a player ranked 60 and one ranked 250. It sounded strange, but now seems prescient.

Aslan Karatsev, a Russian qualifier, made the semifinals of the Australian Open. Juan Manuel and Francisco Cerundolo, two brothers from Argentina who are ranked outside the top 100, made the finals of tournaments in South America, with Juan Manuel winning a title. Lorenzo Musetti, 19, an Italian ranked 94th, knocked off two players in the top 16 at the Mexican Open.

Musetti, though, is only the second-best 19-year-old Italian at the moment: Sinner, the son of a cook and waitress and a surprise semifinalist at the French Open last year, is staking his claim as one of the brightest young players in the game.

“He has everything,” Roberto Bautista Agut, the veteran from Spain, said of Sinner after losing to him in three sets in the semifinals. “Big serve. Tall. Moves well. Very good groundstrokes. Mentally great, and he’s improving.”

Sinner is 6 feet 2 inches with long arms and legs that make him seem taller, and he has that priceless ability to pivot from defense to offense from nearly anywhere on the court and when his opponent least expects it. On three occasions against Bautista Agut, it looked like Sinner was about to wither, especially when he was down a set and three break points at 3-3 in the second set. Instead, he knotted the game with two winners, including a risky, floating crosscourt backhand that nicked the outside of the line.

“Every match has a story,” Sinner said after that win. Later, he said, “Sometimes a few points can decide a match.” 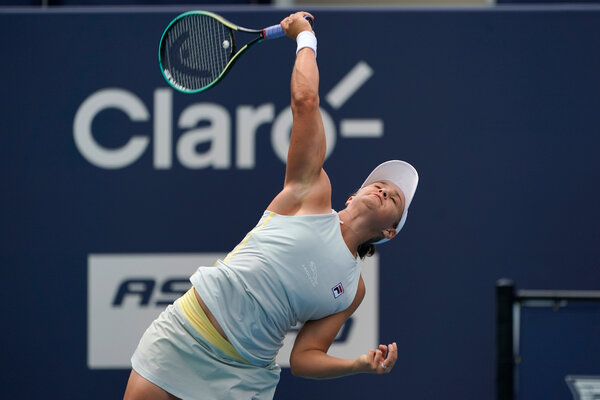 The Miami Open was an opportunity to show on a big stage what tennis could eventually look like.

“I knew when Novak, Rafa, Roger and Dominic Thiem said they were not going to play, some of the younger guys would have a chance to play really deep,” said Hurkacz, 24, a lanky, pigeon-toed big server who has won two tournaments this year.

Hurkacz, who often trains in Florida, was seeded 26th here, but he beat players seeded second, fourth, sixth and 12th in five days. He came back from a set and a service break down to Tsitsipas on a brutally hot day in the quarterfinal; outslugged Rublev in a gutsy performance, on a cool night in the semifinal; then knocked off the game’s latest boy wonder on a bright and breezy Easter afternoon.

Sinner served for the first set at 6-5, but Hurkacz broke him at love. Then a series of errors allowed Hurkacz to cruise through the tiebreaker. Hurkacz frustrated Sinner with a serve that kept kicking up above his eyes, and two early service breaks in the second set made the final result come fast.

Before the match, Sinner had begged off anointing himself the next big thing in tennis, cautioning that a good 10 days in Miami guaranteed nothing. “The road is long,” he said. “I know that. My team knows that.”

Barty, 24, and Andreescu, 20, also know that. The two young Grand Slam champions had never played head-to-head before Saturday’s final, though the showdown proved an anticlimax. Andreescu, who struggled to find her rhythm against Barty’s relentless groundstrokes, appeared to roll her foot and ankle while down, 2-0, in the second set and defaulted two games later, giving Barty her second consecutive Miami Open title, 6-3, 4-0.

Barty, the world No. 1 from Australia, opted not to play when tennis returned last August, because of her country’s strict quarantine requirements for anyone returning home during the pandemic. She played little tennis in 2020 from March until October, when she began to prepare for the Australian summer of tennis. She kept her top ranking only because of a pandemic rule change that allowed players to maintain their points from 2019.

She won a tuneup for the Australian Open, but lost in the quarterfinals of the Grand Slam event and in the first round of a tournament the next week. Barty has gained confidence. In Miami, she barely used the slices she tends to hit when she loses her edge. She does not plan to return to Australia until the fall so she can avoid the country’s mandatory two-week lockdown for international arrivals.

“I knew eventually I would find it,” Barty said of her form and the patience with which she approached her return to the game. “I knew it might not be in the third week or the 10th week or the 20th week.”

Andreescu, a Canadian, caught the injury bug shortly after winning the 2019 United States Open. It kept her from last year’s summer and fall events. In Australia, she showed flashes of her shotmaking prowess but was too inconsistent to play deep into events. In Miami, she prevailed in four three-set matches to make the final, surviving a third-set tiebreaker in the semifinal against Sakkari that finished past midnight. Then came another injury, a final twist in this strange tournament.

She tried to play through the pain, but eventually gave in to her trainer, Abdul Sillah, who urged her from courtside not to risk further damage. “Abdul basically saved me from myself,” said Andreescu, who crouched and cried when she knew the end had come.

With the Miami tournament over, the tours are planning to shift to the clay- and grass-court seasons in Europe, but events there are shrouded in uncertainty. Italy and France are in various stages of lockdowns as the European Union struggles to distribute the coronavirus vaccines. While organizers say the tournaments, the Italian Open and the French Open, which is the next Grand Slam event of the year, remain on track, it’s not clear whether government officials will allow them to take place.

While Nadal and Djokovic will no doubt quickly attempt to restore order, Federer has yet to say how much clay-court tennis he will play. His focus, he has said, is being healthy for Wimbledon.

Osaka, the winner of two of the last three Grand Slam events, has never won a tournament on those surfaces, leaving the door open for any number of her competitors to catch up to her.

“I have more freedom on the clay and grass because I am still learning a lot,” Osaka said last week.

In other words, expect more chaos.