Home » Sport » Willie Brown, Hall of Fame Defensive Back With Raiders, Dies at 78

Willie Brown, Hall of Fame Defensive Back With Raiders, Dies at 78 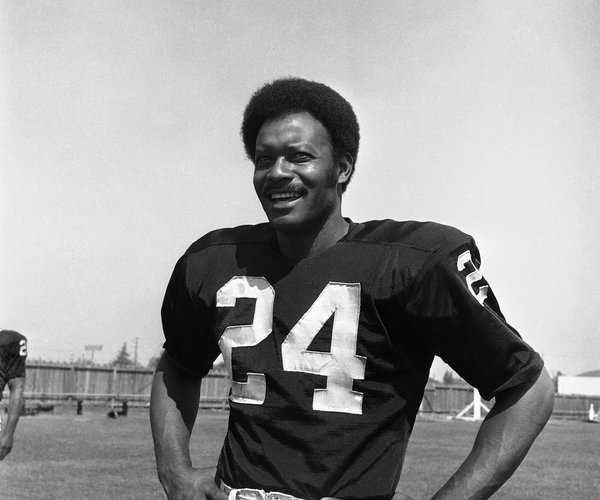 Willie Brown, a Hall of Fame defensive back for the Oakland Raiders in the 1960s and ’70s who memorably returned an interception 75 yards for a touchdown in a rout of the Minnesota Vikings in Super Bowl XI, died on Monday in Tracy, Calif. He was 78.

The Raiders confirmed the death.

Brown was a deft cornerback who joined the swashbuckling Raiders in a trade in 1967, just as the team was becoming one of the best franchises in pro football. He had 39 interceptions in 12 seasons with the Raiders, a team record that he still holds with Lester Hayes. He had seven more interceptions in 17 playoff games.

“Willie was a true Raider and one of the best cornerbacks that ever played the game,” John Madden, the Raiders’ head coach from 1969 to 1978, said in a statement. “It was a comfort to a coach to be able to have Willie Brown in the defensive backfield.”

Brown was near the end of his career when, in the fourth quarter of Super Bowl XI on Jan. 9, 1977, he looked at the Vikings as they lined up on offense on the Raiders’ 28-yard line and, he later said, sensed the play that Minnesota quarterback Fran Tarkenton would call.

As he recalled in an interview with The San Francisco Chronicle in 2014, he turned to Jack Tatum, an Oakland safety, and told him, “Jack, cover my back, because I’m going to jump this.”

He said, of the Vikings, “They were in the hurry-up offense, and I knew exactly what was going to happen because of all the work we’d done in practice and talking about what they had done in the past.”

He made good on his hunch. Covering Vikings receiver Sammy White, Brown stepped in front of him to grab the interception and took off on his 75-yard touchdown sprint, putting the Raiders ahead, 32-7. It became one of the signature plays captured by NFL Films: Brown running toward the camera in close-up and slow motion. Oakland won, 32-14.

William Ferdie Brown was born on Dec. 2, 1940, in Yazoo City, Miss., and attended Grambling State University, where he played split end and linebacker under the storied coach Eddie Robinson.

“It wasn’t real important where we put him,” Robinson told The Times-Picayune of New Orleans in the 1990s. “He would’ve been a great running back, or great tight end, because he was such an outstanding blocker.”

Despite his strong performance at Grambling, Brown went undrafted in 1963 by both the National Football League and the upstart American Football League. Robinson helped get Brown a tryout with the Houston Oilers of the A.F.L., but he was cut in training camp.

But the Denver Broncos, also in the A.F.L., did sign him, and he soon became a star cornerback, with a reputation for making quarterbacks throw anywhere but near him. In 1964 he had nine interceptions and played in the first of his nine Pro Bowls.

Despite his success with the Broncos, Brown was traded to Oakland in 1967 in a lopsided deal that sent a defensive lineman, Rex Mirich, and a third-round draft choice to Denver.

It was the start of Brown’s long association with the Raiders, a team owned for most of that time by the combative Al Davis.

When Brown was elected to the Pro Football Hall of Fame, in Canton, Ohio, in 1984, Davis introduced him at the induction ceremony. In his speech, Davis referred to Brown as “the magnificent horseman who delivered fear and interceptions upon all the great wide receivers of his time.”

Brown’s page on the Hall’s website includes a quotation from him that says in part: “My job was not catching passes. My job was to stop the receiver from catching it. If I could have played 15 or 20 years without an interception, that would have been fine.”

In 1991, the team’s last year of existence, Brown coached the football team at Long Beach State in California. (He also earned a master’s degree there.) In 1994 he coached the team at Jordan High School in Los Angeles.

“The bottom line is that these kids need help,” Brown told The Los Angeles Times. “If I can help on or off the field or in or out of the classroom, then I have made some kind of a contribution. It’s the very least these kids deserve.”

He returned to the Raiders in 1995 as director of staff development and stayed with the team in various capacities, most recently as a team ambassador.

Information on his survivors was not immediately available.

Mark Davis, who succeeded his father as the Raiders’ owner, said in a statement that he would remember Brown not only for his on-field play, but also for how he had treated Mr. Davis’s mother, Carol Davis.

Richard Sandomir is an obituaries writer. He previously wrote about sports media and sports business. He is also the author of several books, including “The Pride of the Yankees: Lou Gehrig, Gary Cooper and the Making of a Classic.” @RichSandomir