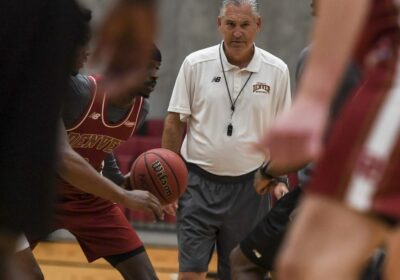 “The second time I went back to change our sweaters, man, I went underwater and I just froze,” University of Denver guard KJ Hunt recalled, and not proudly.

Program-building sometimes gets weird. And wet. It’s never a straight-line, linear process. One of the funkier chapters in the rebirth of the Pioneers men’s basketball program took a detour on the first weekend of October, through El Pomar Natatorium, hours before the dawn.

The second of two days of bonding exercises for the Pioneers started before 5 a.m. on a Saturday and plopped them poolside. As part of a curriculum designed and administered by The Program, a team-building and leadership training service used by athletic departments such as Oregon, Michigan, Tennessee and Florida State, DU men’s basketball players were tasked with partnering up for a communication drill. The challenge: Put a sweatshirt on, take it off, exchange it, and then put the exchanged shirt on — in 13 feet of water.

“I panicked out of nowhere because I was taking the hoodie off,” Hunt, a 6-foot-3 transfer from Morehead State, continued. “And the next thing I knew, I heard this WHOOSH and this water started rushing in and I’m like, ‘Oh, bro.’ I just froze. I had nothing in my head. I had my hands up like this …”

Hunt shot up both arms, suddenly, as if to signal a Broncos touchdown.

“… and my guy Taelyr (Gatlin, another Pios guard) pulled me up.

“And what happened was, it really showed me, like, these are really my brothers. I already knew that, but this solidified it … you don’t get that type of love — I’ve been on teams where you don’t get that. And I told him I appreciated that. Little does he know that he probably saved my life, honestly.”

Hunt is on his fourth different college basketball roster in five years. He’s only known his DU teammates for a matter of months. He’s already convinced that it’s the closest collegiate locker room he’s ever been a part of, drowning or on dry land.

“We care for one another,” said Hunt, who’d averaged 6.9 points per game at Morehead last winter. “I’ve been part of teams that made the (NCAA) Tournament. The thing that separated those teams from other teams was our camaraderie and our brotherhood. We held each other accountable.”

ACCOUNTABILITY is one of the words carved in gold and hanging on a wall inside the Pios’ locker room, not far from the words INVESTMENT and DISCIPLINE. A list of core values rests just within eyeshot of the Xbox and the couches in the players’ lounge — a mission and a mantra.

“I think you’re a ‘builder’ or a ‘sustainer’ as a coach,” explained first-year Pios coach Jeff Wulbrun, who replaced Rodney Billups this past March after spending the previous five seasons as an assistant at Stanford. “In my coaching career, it just happened that the places that I went to and that I coached at, where we had to build the program up … I’ve always taken pride in being able to do that. That task was what appealed to me (about DU).”

The 61-year-old Wulbrun’s bio, in the macro, isn’t all that different from that of Broncos coach Vic Fangio: Decades logged as a respected, trusted assistant, only to land his first major head-coaching gig after the age of 60. Big-time baseball junkie (Dodgers, in this case, as opposed to Fangio’s Phillies). A mentor and teacher who sweats the inches — and details — that can get you beat.

Along Jewell Avenue, the bar is low. The canvas, a blank. Wulbrun is a men’s basketball coach at a hockey school, which is the best and worst thing about the gig. Win or lose, the puck still drops on Friday night.

DU is one of 45 Division I hoops programs who’ve yet to appear in the NCAA Tournament, a small fish swimming anonymously in one-bid ponds.

“I’d love to be in the conversation for most-improved program in the country this year,” Wulbrun said. “If that were to happen, then we’ve done our job in terms of establishing and implementing components which are necessary implements to having a championship level program. I don’t think I’ve used the word ‘rebuild’ once since I’ve been here.”

But it’s definitely a refresh. Between the pandemic and the transfer portal, college basketball rosters now turn on a dime. Of the 15 players who opened preseason camp with the Pios, nine have been with the program for just a few months, and eight of them committed without taking a campus visit.

Wulbrun tossed into that pot players who hail from 10 states and four countries, including Italy, Spain and Finland. It’s when you start stirring vigorously that the occasional bit of hilarity bubbles to the surface.

“I’m getting used to the accents, though,” Hunt laughed. “I think (forward) Touko (Tainamo) has been cussing me out, sometimes, and he might not (have) actually told me. I might need to learn (Finnish).”

Like Fangio, Wulbrun’s long-held relationships within the business allowed him to hit the ground running, at least on the recruiting front. Porter, a 6-foot-4 combo guard with MPJ’s smooth stroke from long distance and MPJ’s smile, came on the recommendation of former Washington coach Lorenzo Romar, a longtime confidant of both Wulbrun and the Porter family.

Quiet and reflective, the younger Porter has become fast friends with classmate and teammate Tevin Smith, a loquacious, chatty and gifted 6-4 guard out of Danville, Ill., where he was ranked by 247Sports as the No. 8 prospect in the state of Illinois for the Class of ’21.

An athletic wing option who’d weighed offers from DePaul and UT-Martin, Smith decommitted from Cal State Fullerton before switching to DU to play under new Pios assistant Brandon Dunson. Wulbrun had coached Dunson back at Central Catholic High School in Bloomington, Ill., more than a decade ago after leaving Illinois State.

“Everybody came from everywhere,” Smith said. “And we just clicked right away … we’re like brothers.”

Brothers with caviar dreams. Last March, Hunt was locking horns with West Virginia and Bob Huggins in the first round of the NCAA Tournament. He thinks the Pios — these brothers — can get him there again.

“When I talked to (coaches) through Zoom, they were just so genuine,” Hunt said. “They really had a plan and a vision. And I believed in that vision.”

What was the plan? The vision?

“To be in the (NCAA) Tournament this coming season,” Hunt replied. “They want to change this program around.”

“It is. Most definitely,” Hunt said. With that, he grinned. A survivor’s grin. “But it’s not impossible. At all.”