Who won the 2021 Tour de France? Yellow-jersey wearer in Champs-Elysees 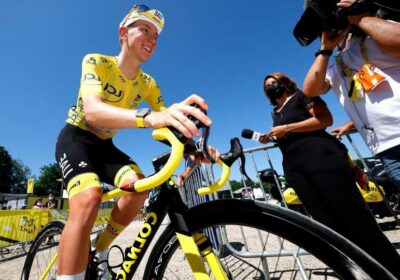 Slovenian cyclist Tadej Pogacar made history a year ago when he became the second-youngest winner of the Tour de France.

In 2021, he’s making history again. At age 22, he became the youngest two-time champion in the 108-year history, and the youngest to win two consecutive yellow jerseys.

Last year, Pogacar won the 10th-closest race of all time when he beat fellow Slovenian Primoz Roglic by just 59 seconds. Roglic, who entered the race as the world-ranked No. 1 cyclist, had several falls early in the first week of action and finished the eighth stage in 175th place. He opted not to continue the tour and decided to abandon the race.

The 2021 Tour de France was all Pogacar’s race. He took the lead in the general rankings and grabbed the yellow jersey on Stage 8. He had already won the time trial on Stage 5, his first of three stage wins. When he rolled across the finish line, he finished with a lead of five minutes and 20 seconds.

In addition to the yellow jersey, Pogacar also won the polka dot and white jerseys.

You can find a full list of classifications here.

Who is the youngest Tour de France winner?

Pogacar, who made his Tour de France debut in 2020, became the second-youngest cyclist to win the event at 21 years old.

The youngest was Henri Cornet, a French cyclist who, at age 19, won the Tour de France in 1904. Cornet never claimed another title in the race after the scoring system was changed the following year to a points system instead of a time system, though it was changed back to scoring by time in 1912.

There have been several cyclists to win the Tour de France in consecutive seasons. Eliminating those who have had their wins stripped — sorry, Lance Armstrong — 13 cyclists have won the race in at least two straight years.

Lucien Petit-Breton was the first to win it twice in a row, when he claimed victories in 1907 and 1908.

If Pogacar races next year, he will join Louison Bobet, Jacques Anquetil, Eddy Merckx, Miguel Indurain and Chris Froome as the only riders to win it in three consecutive seasons. Indurain won the race in five straight years from 1991-95, with Anquetil (1961-64) and Merckx (1969-72) tied for the second-longest streaks at four straight victories.

Four riders are tied for the most general classification wins in a cycling career. Anquetil, Merckx, Indurain and Bernard Hinault have each won the Tour de France five times. Froome has won it four times and Bobet, Philippe Thys and Greg LeMond have each won the race three times.

Already with two wins at such a young age, Pogacar will have plenty of time left to join that elite company. The oldest cyclist to ever win the tour was Firmin Lambot, who took the 1922 Tour de France at 36 years old. Pogacar already has two wins 14 years younger than Lambot.

Mark Cavendish made history during the 2021 Tour de France when he won Stage 13, which tied him with Merckx for 34 overall stage wins. He won four stages during this year’s Tour de France.

He nearly broke the record as he finished strong on the Champs-Elysees, but Wout van Aert came in to win the final sprint to the line for his third stage win of the tour.