Home » Sport » Who is Jon Scheyer? What to know about potential Mike Krzyzewski replacement at Duke

Who is Jon Scheyer? What to know about potential Mike Krzyzewski replacement at Duke 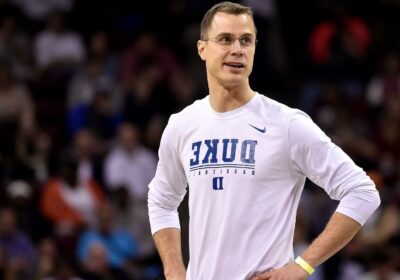 For the first time since 1980, there will be a new face at the helm of the Duke men’s basketball program.

On Wednesday, it was reported that Mike Krzyzewski will retire from his post as head coach of the Blue Devils after the 2021-22 season.

Krzyzewski has been the main figure on the sidelines for the past 42 years, but already a name has emerged as a replacement: Jon Scheyer.

But just who is the potential successor to the winningest coach in NCAA basketball history? Here’s what you need to know.

Former Duke star on the court

Scheyer has plenty of experience not just working for Coach K, but also as a player for the legendary coach.

He was twice named a captain of the team and during his four years for the Blue Devils, Duke went 115-29, appearing in the NCAA Tournament each season and winning the national championship in the 2009-10 campaign. He appeared in all 144 games for Duke, marking the second-longest streak of consecutive games played in program history.

Scheyer saved his best season for last. In 2010, as a senior, he was named a second-team All-American and first-team All-ACC after scoring double-digit points in all but two games, averaging 18.2 points, 4.9 assists and 1.6 steals per game.

Duke wasn’t his first taste of success, however. He arrived after an outstanding high school career. Playing for Glenbrook North High, he was twice named Gatorade’s Illinois Player of the Year and earned McDonald’s and Parade All-American honors as a senior. During his final year, he made headlines when he scored 21 points in just 75 seconds of a game. When he left for Durham, he was the fourth-highest scorer in state history at 3,034 points and was the only player in state history to rank top 10 in points, assists and steals at the end of his career.

After Duke, he played in the NBA G League team the Rio Grande Valley Vipers in 2011 before international stints with Maccabi Tel Aviv in 2011-12 in Israel and with Gran Canaria from 2012 to 2013 in Spain. While with Maccabi Tel Aviv, he kept his winning ways going, taking home the Israeli Cup and Israeli League Cup championships.

Scheyer returned to Krzyzewski and Duke after his professional career wrapped up, joining the coaching staff as a special assistant in the 2013-14 season and moving up to assistant coach before taking on the role of associate head coach, a position he has held since 2017-18.

On his Duke coaching bio, the Blue Devils credit him with playing a vital role in the mentoring and development of a number of NBA Draft picks, including Tyus Jones, Luke Kennard, Frank Jackson, RJ Barrett and Tre Jones.

Just as Krzyzewski has coached the USA Olympic teams, so too has Scheyer taken his talents to coaching at the national level. In 2020, Scheyer was named the head coach of the U.S. team that will compete in the 21st Maccabiah, a tournament held every four years since 1932 with only World War II interrupting the games, in Israel. The games will be held in 2022.

“Jon’s pedigree cannot be matched; few people have had such an accomplished career in basketball collectively as a player and coach,” Josh Schachter, co-chair of Open Men’s Basketball for the 21st Maccabiah said in a release. “We could not be more excited to have Jon lead the United States Men’s Basketball team at the 2022 Maccabiah. The young men selected to the team will have the opportunity to learn and be mentored by one of the premier basketball minds in the world. We are very fortunate that Jon has a passion for the Maccabiah and is eager to embark on this journey with us.”

If the Blue Devils make the commitment to Scheyer, they will be locking him down not long after he was reportedly considered to take over another basketball program.

A report earlier in the year from NBC Chicago’s David Kaplan said that when DePaul had a vacancy for the helm of its men’s basketball program, the Blue Demons reportedly interviewed the Blue Devils’ associate head coach about stepping in to fill the role.

Duke has clearly seen Scheyer as someone capable of filling in for Krzyzewski, however. Earlier in the season, when Krzyzewski was forced to miss time because of contact tracing related to a family member testing positive for COVID-19, Scheyer stepped in to coach the game, according to Sports Illustrated. Scheyer picked up the win in Krzyzewski’s absence, 83-82 against Boston College.

“I’d be lying if I said this did not mean a lot to me,” Scheyer said in the report. “Naturally, you want to step up and have Coach’s back as a staff. I’ve always wanted to win. You’re going into this game and you get one chance so you want to do the best job you can preparing. It wasn’t pretty all the time. I’m proud of the preparation we had as a staff. I’m proud of the decisions in game, although there’s always things you could do better or differently. To start off this way and get a win … it’s easier to call Coach after the game. I may not sleep tonight now. But just to move on and go from here. It meant a lot and I’m very proud.”