What We Learned From Week 3 of the N.F.L. Season 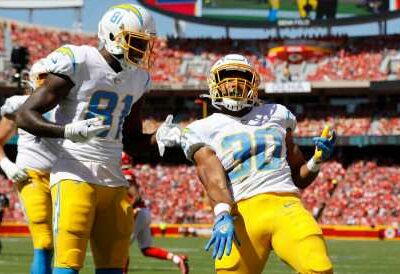 The No. 1 takeaway from Week 3 in the N.F.L.? These new-look Los Angeles Chargers possess precisely what it takes to beat the Kansas City Chiefs: guts. An endless supply of guts.

Chargers Coach Brandon Staley understands that you kick at your own peril against these Chiefs. Working the clock, too, is an ancient concept that leads to your demise. All conventional football wisdom flies out the window when it comes to Patrick Mahomes, Andy Reid and this juggernaut Chiefs offense. But it finally appears that a coach, a quarterback and a team in the A.F.C. West understand all that.

Staley called pass plays often, early and late, and his quarterback, Justin Herbert, delivered 281 passing yards on 26-of-38 passing with four touchdowns and no interceptions. These Chargers proved they aren’t those Chargers of old with a signature win, stunning the Chiefs, 30-24, in Kansas City, Mo.

Even with the Chargers taking a 14-point lead in the first half, it seemed there was more than enough time for the usual Mahomes magic to develop. And that’s what happened in the third quarter as Mahomes threw two consecutive touchdown passes to take a 17-14 lead. The drama ramped up when the Chiefs scored on an 8-yard pop pass to Mecole Hardman to take a 24-21 lead with 6 minutes 48 seconds to go.

But the Chargers punched back. First, Herbert directed a 10-play, 69-yard drive to tie it at 24. That’s when, just one week after his costly turnover in a loss to the Baltimore Ravens, Mahomes had another backbreaking error. His third-and-8 overthrow of tight end Travis Kelce was intercepted by Alohi Gilman at the Chargers’ 41-yard line with a little less than two minutes left.

The 23-year-old Herbert went back to work. On third-and-2 on that first set of downs, he fired a 15-yarder to Keenan Allen in stride.

On fourth-and-4, with 48 seconds left, Staley bypassed a 47-yard field-goal attempt to win it. And when his rookie left tackle, Rashawn Slater, was flagged for a false start? Staley kept the offense on the field for fourth-and-9. Herbert uncorked another fastball at receiver Jalen Guyton, who was interfered with by Chiefs cornerback DeAndre Baker. No, Staley and Herbert were not done. With the clock ticking to 41 seconds, and the ball at Kansas City’s 20-yard line, at Arrowhead, most teams would have opted to play for the field goal.

Herbert lobbed a perfect 16-yard pass to Mike Williams, who got out of bounds, then lofted a 4-yard score to Williams on first-and-10 with 32 seconds remaining, a call that had the CBS analyst Tony Romo questioning whether the Chargers left Mahomes too much time.

So much could have gone wrong for the Chargers while throwing the ball so late. Each incompletion made the case for a go-ahead field-goal attempt instead of forging ahead for a touchdown that would have required the Chiefs to go the length of the field to answer it. One sack could have been disastrous. One interception would have handed Kansas City the game.

Staley’s decision to go for it on fourth-and-4 and then again on fourth-and-9 marks a new fearlessness in the face of the Chiefs’ magic. It came the week after Ravens Coach John Harbaugh played for the win against Kansas City in Week 2. Those two coaches had to have recalled last season’s A.F.C. playoffs.

In the divisional round, down, 22-17, to the Chiefs, Browns Coach Kevin Stefanski opted to punt on fourth-and-9 from his own 32-yard line with 4:19 remaining. The Browns never touched the ball again.

In the A.F.C. title game, Bills Coach Sean McDermott opted to kick a field goal from Kansas City’s 2-yard line at the end of the first half to cut Buffalo’s deficit to 21-12. And in the second half of that game, McDermott opted for another field goal on fourth down from the Chiefs’ 8-yard line. The Bills were blown out, 38-24.

Both made grave mistakes against the Chiefs.

Recognizing that the Chargers have one of the best young quarterbacks in football — one who is surrounded by talented receivers and is now 2-1 against the Chiefs — there was zero need for Staley to play it safe.

Staley can match wits with Reid, who was taken by ambulance to a hospital after the game.

Herbert can swap haymakers with Mahomes.

This rivalry is going to be a lot of fun.

Buffalonians are overcome with the same “We can’t have nice things” fear every year. Eventually, we reason, everything is bound to go wrong. So even after Josh Allen finished second in the M.V.P. Award voting last season and even after the Bills won their first division title since 1995, a feeling of dread lingers in Western New York.

In a Week 1 loss to Pittsburgh, Allen looked like that raw rookie out of Wyoming.

In a Week 2 rout of Miami, he didn’t look much better.

Week 3? Allen eviscerated the Washington Football Team in a 43-21 win. With three touchdown passes to build a 21-0 lead early in the second quarter, Allen looked like the pinpointing thrower the Bills thought worthy of a six-year, $258 million contract this off-season.

He rolled right and slung a 28-yard pass to wide receiver Emmanuel Sanders in the end zone to cap Buffalo’s first drive.

Allen didn’t panic on the Bills’ third drive, when Washington defensive tackle Daron Payne brought pressure in the red zone. On third-and-4 from Washington’s 7-yard line, Allen shimmied to his right and hit running back Zack Moss in stride with a touchdown pass.

Washington cut the Bills' lead to 21-14 with quick scores in the second quarter, but Buffalo smothered the threat with offense, scoring on five of its final seven possessions. Allen was accurate as ever, throwing for 358 yards, four touchdowns and no picks with a 129.8 passer rating.

Everything came so easy for the Bills’ passing game in 2020. Not since Jim Kelly in the early 1990s could locals expect something good to happen late in the fourth quarter instead of something bad.

Short-circuiting for two weeks ushered back that feeling of impending doom. Sunday’s win brought on the realization that, as good as Stefon Diggs is, this Bills team is at its best when Allen is dealing to receivers — like Emmanuel Sanders, who hauled in two touchdown catches — all over the field.

The Vikings aren’t dead yet.

When everything’s perfect around quarterback Kirk Cousins, he’ll carve up an opposing defense. But for most of his career, things have not been perfect and his traditional style has folded in the face of pressure. These Vikings (1-2), however, are loaded at receiver, and Cousins has had ample time to find them. The staggering results of that mix showed in Sunday’s 30-17 win over the Seahawks (1-2).

Through three games, Cousins has passed for 918 yards with eight touchdowns, zero interceptions and has been sacked only five times.

Seattle had no answer for him and no amount of Russell Wilson would suffice.

Dalvin Cook was sidelined with an ankle injury and it did not matter.

Pressure didn’t seem to bother Cousins one bit. On arguably his best throw of the night — a third-and-5 conversion with eight minutes left — he faded backward just enough to avoid a blitzing, untouched linebacker and delivered a 15-yard pass to K.J. Osborn on a crossing route.

It was the sort of throw we’ve rarely seen Cousins make in his career, but if he can beat the blitz like this? This Vikings offense will keep rolling.

The Steelers may have made a bad bet.

This was the massive risk the Pittsburgh Steelers took heading into 2021. They had no interest in a total rebuild and so they welcomed 39-year-old Ben Roethlisberger back — on a pay cut — to a division where Lamar Jackson (24), Baker Mayfield (26) and Joe Burrow (24) are the other starters.

With a lot of defense, and just enough of a ground game, Pittsburgh bet that a team that started 11-0 in 2020 could again rev into form as a Super Bowl contender. That may still turn out to be the case. Pittsburgh opened this 2021 season with a stunning win in Buffalo. But on Sunday, we learned this will be a very difficult bet to ride through another full season.

Burrow, a second-year quarterback who is coming off a heinous knee injury last season, finished with a 122.9 passer rating on 14-for-18 passing for 172 yards. The Steelers’ talented secondary struggled keeping up with Burrow and his former Louisiana State teammate Ja’Marr Chase, who caught two of his three touchdown passes.

Roethlisberger threw the ball a ridiculous 58 times, which is about 38 more times than Coach Mike Tomlin would probably like. Najee Harris, the running back drafted in the first round to change the ethos of this offense, has not been able to dominate fronts the way he did at Alabama and that remade Steelers line may have something to do with it.

Pittsburgh got down early, was not able to play a clock-controlling run game and likely cannot help but wonder if Roethlisberger will be able to keep up in this division.

A Bit About Sunday’s Other Games

Ravens 19, Lions 17: Kickers matter. Justin Tucker’s game-winning, 66-yard field goal showed him as maybe the most clutch kicker of his generation. But let’s not forget what set up the longest kick in N.F.L. history: Lamar Jackson’s 36-yard strike to Sammy Watkins on fourth-and-19 from his own 16-yard line.

Cardinals 31, Jaguars 19: It was not pretty. A 68-yard field-goal attempt by the Cardinals backfired, badly, in the form of a 109-yard touchdown return. But Arizona sure lacked ugly wins last season. Now that the Cardinals are 3-0 for the first time since 2015, they should make no apologies.

Saints 28, Patriots 13: If Mac Jones needs to throw 51 times per game as he did Sunday, the Patriots aren’t going to win much. The play script got away from New England at home and, of course, Jameis Winston supplied the sort of touchdown pass only he can.

Falcons 17, Giants 14: The good news: Saquon Barkley scored his first touchdown since 2019. The bad: everything else. Barkley managed 3.2 yards per carry against the hapless Falcons, Daniel Jones was average and the Giants are 0-3.

Browns 26, Bears 6: Chicago fans wanted to see Justin Fields. They got Justin Fields. The former Ohio State star has a long road ahead — especially with this roster. Fields had only six completions the entire game, while getting sacked nine times — 4.5 times by Myles Garrett — and hit 15 times in all.

Broncos 26, Jets 0: Until they play the Chargers or the Chiefs, it’s hard to get an accurate read on how good this Broncos team is, but there’s no denying the defense absolutely gives Denver a shot against Patrick Mahomes and Justin Herbert.

Rams 34, Buccaneers 24: We knew this Sean McVay-Matthew Stafford had potential but not many predicted they’d be ready to down the Bucs defense this early in the season. Stafford completed 27 of 38 passes for 343 yards with four touchdowns, no picks and was only sacked once.

Raiders 31, Dolphins 28 (overtime): The Dolphins made it interesting but give Coach Jon Gruden and quarterback Derek Carr credit for finding a way to win another close game. Arguably no quarterback is playing better than Carr right now and the Raiders are 3-0.

Packers 30, 49ers 28: The slightest mistake will cost a team against a determined Aaron Rodgers and, chances are, Jimmy Garoppolo will be thinking about snapping the ball with 12 seconds still on the play clock with less than a minute left in the fourth quarter all week. Sure, the 49ers scored that play but Rodgers had more than enough time — even with no timeouts — to get the Packers into field goal range. Two passes to Davante Adams, a 25-yarder and a 17-yarder, was all it took. Rookie quarterbacks have looked really bad across the league, so you get Kyle Shanahan’s logic in wanting to sit Trey Lance. But mistakes like this from Garoppolo have to drive the 49ers coach mad.