What We Learned From Week 14 of the N.F.L. Season Most of the favored teams won in Sunday’s early N.F.L. action, but there was still a little drama, including a mistake-filled performance by the leading candidate for the Most Valuable Player Award, an unbelievably bad day for a veteran kicker and a turn-back-the-clock day for a team that had fallen on hard times.

Here’s what we learned:

The Chiefs are not fair. Coming into the day, Patrick Mahomes appeared locked in for the second M.V.P. Award of his career and had been intercepted just twice in 463 passing attempts. The Miami Dolphins’ opportunistic defense had him flustered for much of the day, picking him off three times in 34 attempts. On top of that, Miami made Mahomes look foolish on a rambling play in which he repeatedly retreated before being sacked for a 30-yard loss. The Dolphins picked up a fourth takeaway on a fumble by Mecole Hardman. And Tua Tagovailoa had the first 300-yard passing game of his career.

The win improved Kansas City to 12-1, and the Chiefs, who clinched the A.F.C. West, have a good chance to secure the A.F.C.’s only first-round bye in the playoffs. Miami dropped to 8-5, but is still a strong contender for a wild-card spot. 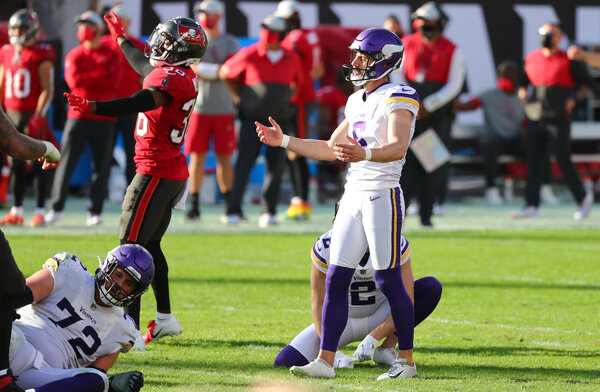 The Vikings might need a new kicker. While his missed kicks would not have provided enough points to give Minnesota a win on the road, it was hard not to point a finger at Dan Bailey in his team’s 26-14 loss to the Tampa Bay Buccaneers. Bailey missed an extra-point attempt in the first quarter and proceeded to miss field-goal attempts of 36, 54 and 46 yards, with each sailing wide right. According to ESPN Stats & Information, Bailey is the first player to miss three field-goal attempts and an extra point, without a make of any kind, since Washington’s John Aveni in 1961. Bailey also missed two extra points and a 51-yard field-goal attempt last week, making him 1 of 4 on extra points and 2 of 6 on field goals in a two-week period after having started the season 26 of 27 on extra points and 10 of 12 on field goals.

With Arizona and Chicago winning, Minnesota (6-7) complicated its wild-card hopes. Tampa Bay, on the other hand, improved to 8-5, and is on its way to its first playoff appearance since 2007.

The N.F.C. East is far from decided. The Giants’ four-game winning streak came to a screeching halt with a 26-7 loss to the Arizona Cardinals in which neither Daniel Jones nor Colt McCoy could get anything going with New York’s offense. The Giants dropped to 5-8, while Dallas improved to 4-9 with a 30-7 win over the Cincinnati Bengals in which defensive end Aldon Smith scored the first touchdown of his tumultuous career. With Washington and Philadelphia in the race as well, the East will most likely come down to whichever team gets hot over the final weeks, though the prize for winning the division is shaping up to be a first-round game as an underdog at home to a wild-card team.

The Bears can still make the playoffs — yes, the Chicago Bears. After a 5-1 start, Chicago turned into a laughingstock with six consecutive losses. But the Bears dominated Houston in every way on Sunday and came away with a 36-7 win in which several unlikely things happened. Among them: Mitchell Trubisky outplayed Houston’s Deshaun Watson; running back David Montgomery had his most productive game in nearly a year, rumbling for 113 yards (with 80 of them on a single, electrifying run); and the Bears’ defense sacked Watson seven times, once for a safety. Chicago had more rushing and passing yards, and fewer turnovers, than the Texans. And the win managed to keep the Bears very much alive in the race for the N.F.C.’s third wild card.

Derrick Henry stands alone. After a 215-yard performance in Tennessee’s 31-10 win over Jacksonville on Sunday, Henry has four career games with 200 or more rushing yards and two or more touchdowns, breaking a tie he held with Jim Brown, Barry Sanders and LaDainian Tomlinson, each of whom is in the Hall of Fame. Henry is leading the N.F.L. with 1,532 yards rushing this season — just 8 short of the total he led the N.F.L. with last year — and he has run for 100 or more yards in his last nine road games, one short of Sanders’s N.F.L. record.

Henry was so dominant that you’d hardly notice that Ryan Tannehill passed for 212 yards and two touchdowns, one of which was an incredible 37-yarder in which A.J. Brown corralled the ball with just his right hand.