A man who was closely linked to champion trainer Darren Weir's meteoric rise through the Victorian racing ranks believes that it was after the shock Melbourne Cup victory of 100-1 outsider Prince of Penzance in 2015 that things started to change in the Weir camp.

Peter Ellis did the form for Weir and helped all his race riders with tactics as the Ballarat-based handler began training huge numbers of winners. The trainer would often praise the input that his form analyst had given after horses won races, particularly in the early days of their working relationship. 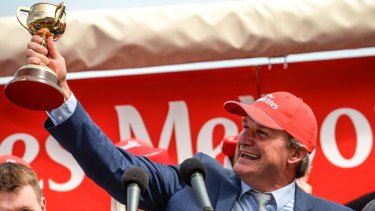 Ellis stresses that he saw no improprieties during his rare visits to the stable in the five-plus years he was working as a tactical advisor for Weir, a time that petered out in 2017 and ended almost a year ago.

But he revealed that when Weir was beginning to train huge numbers of winners he had been asked to explain to Victoria's racing integrity commissioner Sal Perna's staff how his horses were being placed and how the tactics worked.

"It was around the time of the Geelong Cup in 2013. Sal Perna rang me and asked me questions about how I did the form and why he was winning so many races," Ellis said.

"I spent an hour-and-a-half with them explaining that up to that point few people were doing as in-depth analysis as I was doing for Weir. I would go through the form of our horses and all the rivals and give the jockeys written sheets with instructions on the likely pace, where opponents might race, which part of the track was the best area to be in.

"Darren Weir was excellent at getting the horses hard-fit, so in a competitive field if you have a really fit horse and a bit of a tactical edge it can give you a big advantage."

Ellis no longer works for Weir – "the last job I did for him was in April 2018 and he had cut back my input and working days considerably before that" – but says the stabled changed after the historic Cup victory of Michelle Payne on the rank outsider.

"Up to then he had been getting lots of winners but he hadn't really had all that many group 1 horses or classic-type winners. Then the stable expanded rapidly, he got lots more owners in and lots more staff and just generally the whole operation got bigger, the horse numbers rose astronomically and more people involved.

"My role got less and less involved: he employed other people like [former jockey and trackwalker] Darryn Murphy to work on race day too.

"I wasn't as connected in the last few years as I had been from the time I started with him [in 2012] but as I was increasingly looking on from the outside it just seemed the mood in the camp had changed.

"I only went to the stable twice in all the time I worked with them. I used to talk to him on the phone about runners, the races they planned to aim them at, and what sort of tactics would be best suited to the way the race was likely to shape. Most of the time I dealt with him on race days only."

"I didn't leave because of any improprieties or because I saw or knew of anything untoward happening. It was just that my role was being downgraded and things were changing.

"I just thought it was up to them how they wanted to run their stable and do their planning, so I was happy enough to look elsewhere. Things had changed a lot, though, with the number of runners they were having and the amount of horses on his books."

Ellis, who has also written as a form expert during the Melbourne spring carnivals, says that however this episode shakes out there is no doubt that Weir is an exceptional horseman, even if at first he wasn't always aware of the nuances of jockey tactics or plotting speed maps as to how races might be run.

"The first time I did anything for him was at Ballarat races in late September 2012. He knew that I was doing speed maps and analysis, and he asked me to help with a couple of runners that day, Lord of Brazil and King Buddy.

"They both won, and during the latter part of the spring he had a coffee with me at Flemington and told me he wanted to go to the next level and asked whether I would work for him.

"One of the reasons I did agree to go with him then was because I thought he was the best trainer – along with Peter Moody – in Victoria, and that I believed he was the best horseman in the country."