The Melbourne Vixens have recorded an emphatic win in the first all-Victorian Super Netball final,  thumping the Magpies 62-49 to earn a preliminary final appearance against the NSW Swifts in Sydney next Sunday.

By snapping a run of three successive defeats and simultaneously ending the Magpies' impressive three-game winning stretch, the Vixens extended a season that had threatened to go off the rails while ensuring their opponent's would finish at the semi-final stage. 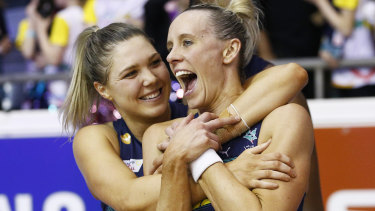 The Magpies had broken their two-season drought against their local rivals and claimed both the teams' previous games in 2019 – including the 58-47 result seven days earlier that enabled a dramatic late entry into the final four.

The third-placed Vixens were badly stung by that performance, for although they had nothing to play for in terms of ladder position, victory would have provided a pre-finals boost after consecutive losses to the top-placed Swifts and Lightning.

Yet coach Simone McKinnis retained faith in her regular starting seven – including shooter Caitlin Thwaites, who had finished the last two games on the bench and must have been under pressure from Mwai Kumwenda – and was rewarded with a brilliant 20-9 opening quarter that set up the victory despite the Magpies winning the second half 30-28.

The plan for Thwaites to lead Geva Mentor out of the circle and open up the drives for Tegan Philip to compete one-out with April Bradley was apparent, and effective, early. So often the Vixens' barometer, but also the player whose best and worst are most extreme, Philip was exceptional in the first half in particular.

The defensive intensity was also ramped up, with Emily Mannix, Jo Weston and the retiring Renae Ingles – whose career will continue for at least another week – all superb, as their opponents were held to nine goals less than the previous Sunday.

In centre, Kate Moloney was able to reduce the influence of in-form Ash Brazill, whose successful switch into the pivot has been such an important factor in the Pies' stellar three weeks, and Lizzie Watson rebounded after a relatively quiet last round.

So comprehensive was the effort that McKinnis was able to bring both Kumwenda and centre Lara Dunkley off the bench in the last quarter. For different reasons, the Magpies used their full squad of 10. 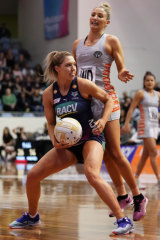 It had been five years since the State Netball and Hockey Centre last hosted a national league game – back when Magpies captain Geva Mentor was a Vixen, Nat Medhurst a Firebird, Philip came off the bench and Sharelle McMahon was playing her last game – and this was the result of the unavailability of all three bigger venues at Melbourne Park.

Magpies head coach Rob Wright was not in the house for the fourth consecutive game, with the funeral for his mother Jeanette having been held in Sydney on Wednesday.

In his absence, assistants Nicole Richardson and Kate Upton had built a perfect record in the final three home and away rounds as they surged from the verge of another underachieving season into far more positive territory.

So although it has ended at the semi-final stage for the second time in three years, there is still plenty to be taken from what has been a difficult and disrupted season, including the development of Shimona Nelson and what genuinely seems to be a happier and more cohesive until than in Super Netball seasons one and two.

The Vixens, minor premiers in 2017 before a straight-sets exit, have dropped both games to the Swifts this season. The victor in the next will meet the two-time defending champions Sunshine Coast Lightning for the title in Brisbane on September 15.