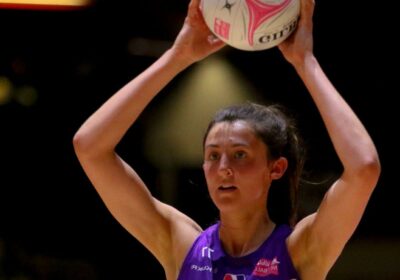 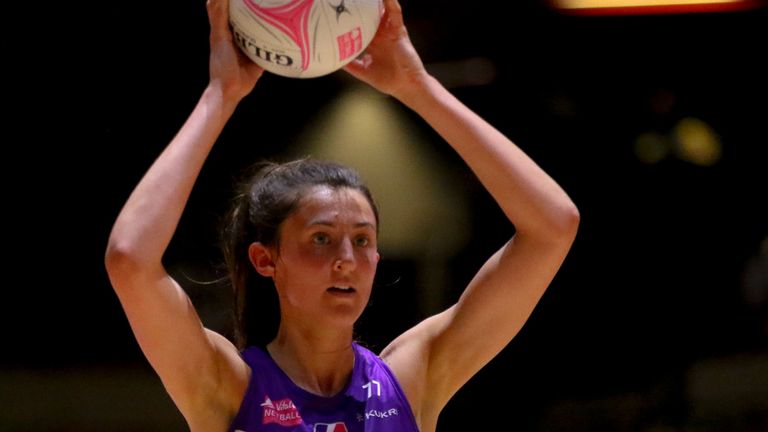 Loughborough Lightning are ready to embrace the pressure of finals weekend and have “no regrets” as they prepare to take on Leeds Rhinos Netball on Saturday afternoon.

Loughborough Lightning have never won a Vitality Netball Superleague title. Back in 2008, they lost to Mavericks in the final, then in 2017 and 2018 Wasps were the team that made them fall at the final hurdle. Most recently, Mel Mansfield’s outfit beat them again in 2019 but, on that occasion, it was at the semi-final stage.

This year, they’re going into the league’s final weekend off the back of an outstanding performance against Team Bath Netball. On Monday night, Lightning’s 19-goal victory highlighted just how deadly they can be when they hit their straps, and what was even more impressive, is that it followed a poor performance against Thunder the week prior.

“I’m really proud of their bounce back from last week, because they were terrible [against Thunder],” Sara Francis-Bayman said to Sky Sports on Monday evening. “To come out and play like they did, takes a lot of guts.

“It was nice to get a performance like that when we needed it,” Lightning’s director of netball added.

“It wasn’t a dead rubber match; it did really matter to both teams. It was really good to see that level of fight from the girls.”

Fight is what Lightning will need again on Saturday afternoon when they tackle their semi-final and knockout netball arrives. A key question is how an earth they replicate their Round 20 performance again?

“Well, that’s the question we’re trying to answer this week,” Francis-Bayman said during the middle of finals week.

“Our training intensity has been good, and we’ve got to make sure that we keep things relatively consistent, while also acknowledging that there’s a lot of pressure this weekend.

“We need to face up to that pressure, realise that it is going to be an element at play, but also just focus on the things that we can control.”

Within Francis-Bayman’s defensive unit is a player who knows a lot about finals weeks and weekends.

Since her arrival from Australia in 2013, Sam May has been part of every season-defining weekend and the defender has claimed two championship titles, two runners-up finishes and a third-place medal.

“This one is a bit different as we’ve got such a quick turnaround having played on Monday,” she said to Sky Sports.

“We’ll just have a couple of sessions before it’s time. Everyone’s on a high which is great though, and we’ll look to take that through to Saturday and Sunday. 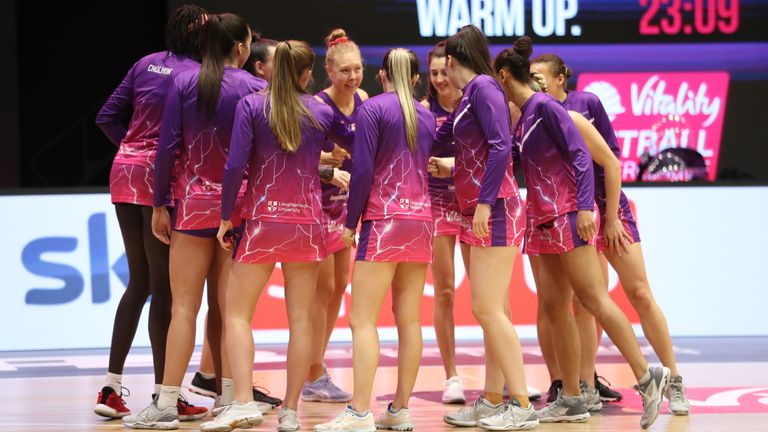 You’ve just got to give everything and have no regrets. We’ll have done everything that we can in training, so it will then be the time to enjoy it and leave it all out there.

As a result of Lightning’s 19-goal win over Bath, they secured top spot in the standings and therefore booked a last-four meeting with Leeds Rhinos Netball.

When Rhinos step on court and face Francis-Bayman’s outfit, they will not have played a competitive match since May 31, due to having to isolate after a positive COVID-19 test within the camp.

“It will have been tough for them to just train this week and play a semi-final, but equally they’ll be raring to go and be up for it,” Francis-Bayman noted.

“We’ve got to make sure that we do the work in terms of assessing what they’re likely to do and also not get too hung up on the fact that they’ve not been around for a couple of weeks, because we can’t control that.”

Rhinos will be without their exceptional shooter Donnell Wallam, who has flown back to Australia after losing her grandmother while the whole squad were isolating.

For Rhinos’ head coach Dan Ryan, whose first priority was to ensure that Wallam could return home as quickly as possible, her absence changes their “team mechanics” and that’s something his counterpart is acutely aware of.

“It’s almost tougher because we’ve not seen Sienna [Rushton] for a while. They’ll be practising this week and building up with a different combination, as I said, it’s one that we’ve not seen for a number of weeks.

“We can’t afford to get too hung up on it, our focus for the last few weeks has been on what we are good at and what we can do. Now, we need to continue to do that because if you start questioning what’s going on in the Leeds camp, then your focus is in the wrong place.” 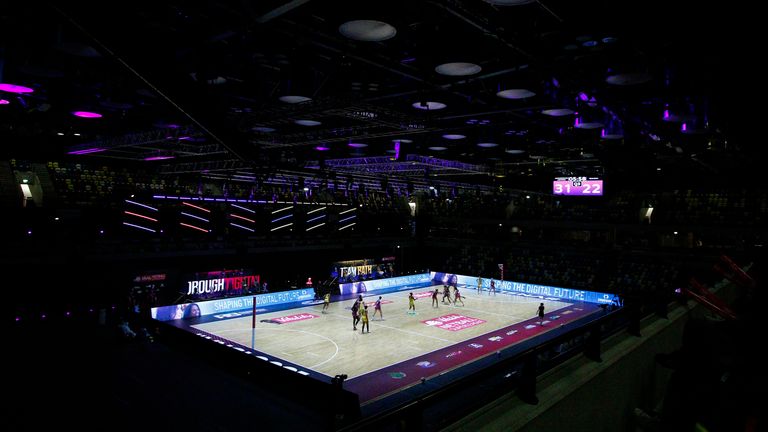 At this point in the season, there’s no shying away from Lightning’s record of missed opportunities when it comes to Superleague semi-finals and final. It’s something that Francis-Bayman and assistant coach Olivia Murphy know, and have been addressing for a while, since the team booked their semi-final place a number of weeks ago.

“We’ve talked as a group that you can’t ignore wanting to win because that’s what you’re there for,” Francis-Bayman said.

“Every team in the semi-finals will know that they’re only two games away from winning it. At the same time, you can’t focus solely on that or double down on it and talk about it all of the time.

“You need to focus on the things that you can do to get that result. There are always going to be those nagging doubts from players who have lost finals, I think that every player has those doubts, whether you’ve won Superleague titles or not. 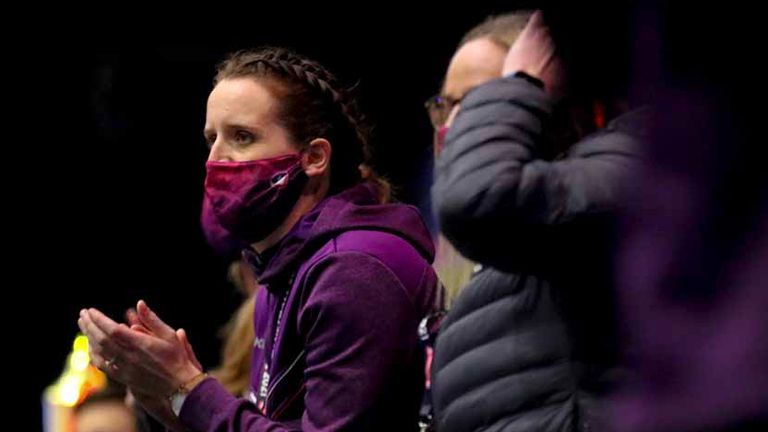 You always go into a final with that little devil on your shoulder. It’s about being able to have the confidence in your preparation and the knowledge that you’ve done enough work to be confident in what you’re going to put out and you’re ready.

“The blend of youth and experience that we have in our team, lends itself to going out and enjoying it,” Murphy added.

“The older ones could be worrying a little bit because they’ve been out before and lost, whereas the younger ones are going out there without that and they can just play.

“The other thing I would say, is that we have the likes of Beth Cobden in our group, someone who has won Superleague titles and a Commonwealth Games gold. She’s the most delightful bundle of joy you could ever wish to bring into your group.”

“Beth is the person who is saying what an amazing opportunity this is and telling us all that we’re going to have the best time,” Francis-Bayman said about her mid-courter.

“She’s a fierce competitor and you want someone like her within the group.” 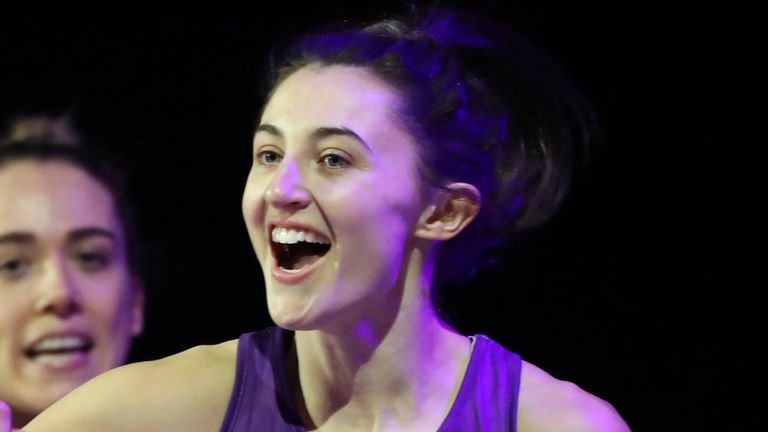 It’s all about bringing the energy and I think that everyone in the team has a responsibility to do that. We all talk about it, so hopefully everyone comes into the matches excited and we can really lift each other.

With Cobden bringing the energy and big game experience, alongside the likes of a focused May, captain Nat Panagarry and other stalwarts like Hannah Joseph, Francis-Bayman’s outfit are in excellent shape going into this year’s finals weekend.

Looking into Lightning’s camp, it appears that there’s little danger that they have played their final a week early, and instead their focus is on that being a springboard for further success.

“This is what you do it for,” Francis-Bayman concluded. “At the beginning of the season, you set goals and you want to make the top four and the semi-finals… this is what we’re here for. “I do enjoy it,” the former international added about finals and big games. “But, I don’t enjoy the lack of control I have when they go out and play! We [Olivia and I] actually said on Monday night, we’d rather be playing than watching!

“You do everything that you can and put them in the best possible position and then it’s nothing to do with you what happens on court really. So, giving up that control over the result and the performance is difficult and something that most coaches struggle with.

“I like the process of us building, trying to get there and seeing our team respond. The performance on Monday was a perfect example of that.

“Now, we need to use the confidence that we gained from that and take it into Saturday. We need to really go out there, attack the game and not back off at all.”

Sky Sports is your home of netball. The Vitality Netball Superleague continues on Saturday, with the semi-finals live on Sky Sports Action and Mix and streamed on the Sky Sports YouTube channel from 1.30pm.