Rising stars of the Australian turf such as The Autumn Sun and Ringerdingding could be tempted to try their luck in Sydney during next year's spring carnival after Racing NSW launched another salvo in the multi-million-dollar turf wars that have been raging across the Australian racing landscape.

The Sydney authorities have unveiled a new 1500-metre race for four-year-olds to be run at Rosehill on Victoria Derby Day with a prizemoney purse of $7.5 million – comfortably ahead of anything that is on offer at Flemington that day.

The Golden Eagle, as the race will be called, was the centrepiece of a suite of three additional feature races carrying big prizemoney to be run in Sydney on consecutive Saturdays during the spring carnival.

Racing Victoria bosses provided a muted response, but it is clear that they regard the initiative as a bid to encroach on an area of the racing year when Melbourne holds sway. The Victoria Racing Club declined to comment. 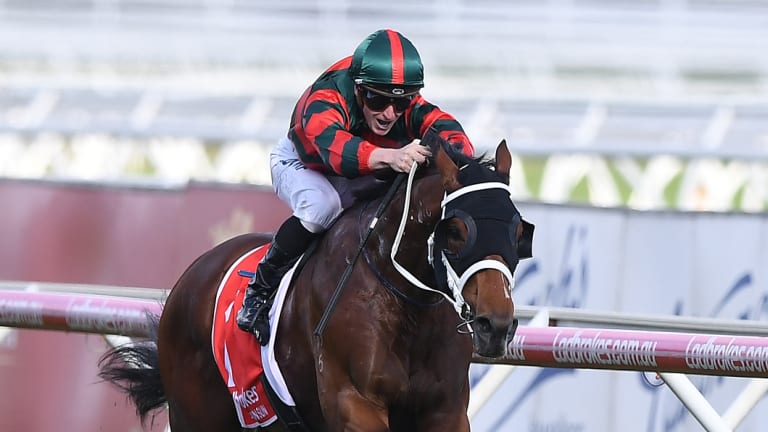 Stars of the turf such as The Autumn Sun may be in demand next spring.Credit:AAP

Whether a horse like The Autumn Sun – an impressive winner of the Caulfield Guineas – could be tempted to bypass a Cox Plate preparation next year looks unlikely, however.

''He's in a slightly special situation in that he's proven himself superior to his own age group – significantly superior – and we're hoping that's reinforced in the new year and they he will be aiming for weight-for-age success so he has a pretty clear route as to where to go," part-owner John Messara of Arrowfield Stud, told Racing.com.

''For stud purposes, winning against all ages is probably a better underpinning to where he's going.''

RV chief executive Giles Thompson was measured in his tone, but he made it clear that action needs to be taken for an overarching approach to be adopted to ensure racing clubs in future act with more consultation to grow the sport and to ensure that the continuity of existing programming is honoured.

Many will wonder where the pool of top-quality horses exists to provide fields commensurate with the escalating prizemoney levels that Sydney is providing to usurp what was traditionally Melbourne's period in the sun.

''It would be in the best interests of Australian racing if we could act more collaboratively … to ensure that we are in fact growing the overall fan base,'' Thompson said.

''On face value, it would appear that there will be an impact on the existing Australian pattern of races as a result of this announcement and we will be working to understand this over the coming period.''

Racing Victoria has itself acted unilaterally, announcing last month it was introducing the All-Star Mile to be run over 1600 metres in the autumn carnival next year.

This was widely seen as a response to Racing NSW's $12 million sprint, the Everest, which was first run in 2017.

The Golden Eagle will also be the third leg of what will be known as the new Golden Slam at Rosehill, with a $5 million bonus offered to any horse that can win the Golden Slipper at two, the Golden Rose at three and the Golden Eagle as a four-year-old.

With the Everest to be run at Randwick on Caulfield Cup day, Sydney has a race carrying high prizemoney on each of the Saturdays of the Victorian spring carnival.

Officials are concerned that it won't only be horses who end up being diverted from Melbourne to Sydney.

Many of the top jockeys who would otherwise be in action at Caulfield, Moonee Valley and Flemington will be tempted to ply their trade in NSW, which will test the depth of jockeys and horses on the biggest days in Victoria's racing calendar.

Michael Browell, the CEO of Moonee Valley, is not concerned.

''From a Moonee Valley Racing Club perspective, I see no issues with these three races, particularly the new three-year-old race over 1600 metres on Ladbrokes Cox Plate Day.

''I’m sure that Racing NSW and the ATC have formulated a view on what success looks like from these new races and I wish them well in achieving their goals.''