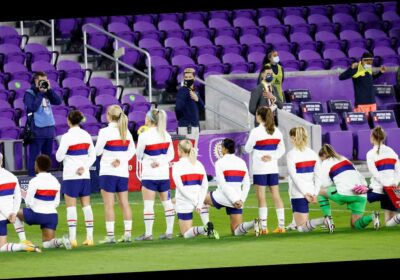 United States Soccer repealed a policy that required players to stand for the national anthem Saturday at its national council meeting.

More than 71% of the council voted in favor of repealing the policy. It was initially repealed in June 2020 by the federations' board of directors after nationwide protests against police brutality and racism. The repeal needed to be approved by the national council in order for it to be official.

Policy 604-1 stated that, "all persons representing a Federation national team shall stand respectfully during the playing of national anthems at any event in which the Federation is represented."

It was put in place in 2017 after USWNT member Megan Rapinoe took a knee during the anthem in solidarity with former San Francisco 49ers quarterback Colin Kaepernick's protest against police brutality and systemic racism.

More than 28% of the votes were for keeping the policy in place.

The USWNT stood for anthem last Sunday before their match against Brazil in the SheBelieves Cup. Some players knelt during the tournament opener against Canada two days prior.

Left back Crystal Dunn said earlier this week that the team was passed protesting the anthem.

"I think we decided that moving forward we no longer feel the need to kneel because we are doing the work behind the scenes. We are combating systemic racism," Dunn told reporters.