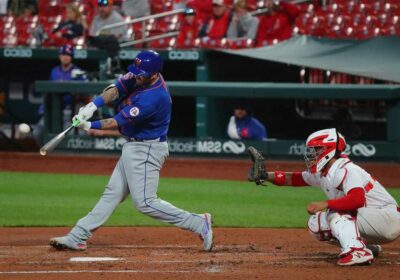 Jacob deGrom seems to have avoided the worst

A root cause of the Mets’ offensive inconsistency this season has been a power outage. This lineup built to mash hasn’t homered nearly enough, and scoring totals have nosedived.

Two unlikely sources, Tomas Nido and Jonathan Villar, went deep Wednesday night in helping the Mets split a doubleheader with the Cardinals at Busch Stadium. The Mets won 7-2 in the nightcap to snap a two-game skid.

In the first game, the Mets managed only two hits in losing 4-1.

Nido’s two-run bomb in the second and Villar’s solo blast in the fourth gave the Mets only their fourth multi-homer game of the season. They entered the day 29th in MLB (the Pirates were behind them) in home-run average per game.

The doubleheader marked the debuts for hitting coach Hugh Quattlebaum and assistant Kevin Howard, who were thrust into their new roles earlier this week after Chili Davis and Tom Slater were fired.

Francisco Lindor, who extended his drought to 0-for-24 by going hitless in three at-bats in Game 1, was on the bench for the nightcap.

Luis Rojas entrusted the nightcap to his bullpen. Miguel Castro, Jordan Yamamoto, Aaron Loup, Trevor May, Robert Gsellman and Jeurys Familia combined to hold the Cardinals to two runs over seven innings. Yamamoto, in his Mets debut, allowed one run on four hits over 2 ²/₃ innings behind the starter Castro.

After building a 4-0 lead with help from the homers by Nido and Villar, the Mets added on in the fifth. Kevin Pillar delivered an RBI single and Villar’s infield hit extended the Mets’ lead to 6-1. In the seventh, the Mets got another RBI from Pillar, on a ground out.

The Mets’ sluggish bats earlier in the day wasted a solid performance from Marcus Stroman, who allowed four runs (only two were earned) over five innings in his return from a shortened outing in Philadelphia last Friday, when his right hamstring tightened.

Rojas unveiled an unorthodox lineup against left-hander Kwang Hyun Kim that included Lindor batting leadoff and Pillar at cleanup. James McCann was sixth in the order. The Mets crashed with a whimper.

“We were off balance,” Rojas said. “We looked at the video of the starter we faced today and there was a lot of secondary stuff thrown. Even the data, the percentages, the guys were off balance taking it, not on it and also getting beat by the fastball. We weren’t squaring anything. Guys didn’t have a good plan at the plate for this one.”

The Mets loaded the bases with nobody out in the fourth, but from that produced only one run to pull within 2-1. McCann hit a grounder to third base that Nolan Arenado booted for an apparent error, allowing Michael Conforto to score. But the Cardinals won a replay challenge, as they had contested Arenado’s foot was on the bag as he picked up the ball. Pillar was out at third, the beginning of a downturn in the inning for the Mets — the next two batters, Villar and Albert Almora Jr. struck out.

Stroman surrendered seven hits with six strikeouts and one walk. The Cardinals scored the two unearned runs in the fifth, following a two-out throwing error by Lindor that allowed Arenado to reach. Paul DeJong hit a towering homer to left that buried the Mets in a 4-1 hole.

“It’s frustrating, but at the end of the day that’s on me,” Stroman said. “I have got to make a better pitch in that scenario.”

Stroman surrendered a two-out homer to Paul Goldschmidt in the first. The blast, which rocketed off the facing of the second deck, was the second homer allowed by Stroman this season. Arenado followed with a single before Stroman retired DeJong for the final out.

In the third, the Cardinals inflicted further two-out damage against Stroman, with three straight hits that delivered a run. Dylan Carlson stroked a line drive single before Goldschmidt hit a bloop to right that landed. Arenado’s ensuing RBI single placed the Mets in a 2-0 hole.

“I felt like I had it in spurts,” Stroman said. “But over the course of five [innings] I didn’t feel like I had it fully together.”