Home » Sport » UFC 254’s organizers are consider moving the event to an 18,000 seater arena and letting some fans in: ‘We’d love for it to happen’

UFC 254’s organizers are consider moving the event to an 18,000 seater arena and letting some fans in: ‘We’d love for it to happen’ 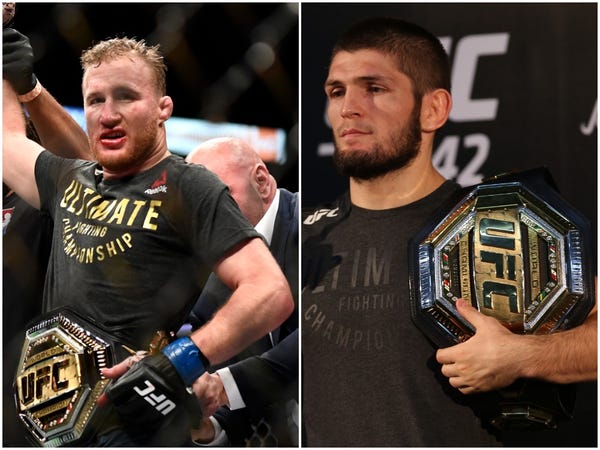 FIGHT ISLAND — UFC 254 organizers are considering moving the event to an 18,000 seater arena and allowing some fans to attend the event, a tourism official told Insider this week.

It would be the first fan-attended UFC show since Weili Zhang disfigured Joanna Jedrzejczyk in a hard-fought slobberknocker at Las Vegas' T-Mobile Arena on March 8.

It is scheduled to take place at the behind-closed-doors Flash Forum on Yas Island in Abu Dhabi, inside a quarantined bubble the local government purpose-built for the UFC's international events.

Every Fight Island event so far has been held at the Flash Forum but even though UFC 254 is eight days away, officials at Abu Dhabi's department of culture and tourism (DCT) are exploring the possibility of moving the event to the nearby Etihad Arena — a new construction the DCT also built with the UFC in mind.

To the side of the UFC's beachside training Octagon on Yas Beach on Thursday, DCT marketing director Saeed Al Saeed told Insider that there "could be" fans at a new venue next week.

There are logistical challenges that come with switching arenas at late notice, moreso when you factor in the precautions necessary during a global pandemic.

"We proved at Fight Island in July and the Return to Fight Island that health and safety are our top priorities for everyone involved," Al Saaed told us.

"What we're looking at now is if we're able to move venues. The arena is not within the safe zone.

"It's not just us, the staff in Abu Dhabi, it's everyone who's traveled to experience the safe zone — they're our responsibility.

"So if we're saying we're going to get people outside the bubble into the same physical structure that [media, UFC staff, and athletes] are in, we have to make sure there's no compromise, zero-risk, and we've mitigated all of these potential breaches."

This is what it could look like inside, albeit for a basketball match rather than a UFC event:

A source with direct knowledge of the plans for allowing fans told Insider that, if the event were to have an audience, each attendee would have to present a negative COVID-19 test with 48 hours validity.

Other safety measures would include transporting the fans to the venue on sanitized buses, and then through different entrances.

Social distancing measures of two meters between each fan group would also be in place, there would be screens between fans and the Octagon, and there would be a staggered exit system back to buses to transport fans to a drop-off point.

Al Saeed also confirmed to Insider that if the venue switch were to take place it would be a partial capacity rather than a maximum attendance.

He did not give an indication of how many fans might be able to attend if the plans go ahead.

"Everyone must be safe when they leave Fight Island." he said. "We'd love for it to happen but we will not compromise on health and safety."