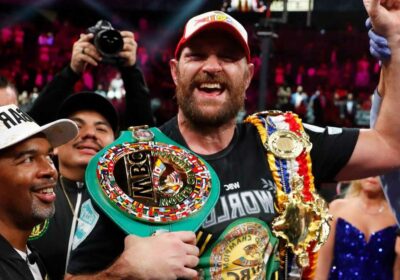 TYSON FURY claims his mum has NEVER been to one of his fights.

And she doesn’t care about the Gypsy King being world champion so long as he is ‘healthy and happy’.

He had been hoping to fight Anthony Joshua in an all-British, world heavyweight unifier.

But AJ lost his belts to Oleksandr Usyk last month and has already triggered his rematch clause – with that fight likely taking place in March.

Fury will now consider his options after becoming king of the ring.

But one person who isn’t too interested in his next step is Fury’s mum, Amber.

The Gypsy King claims she has never watched him fight, either as an amateur or a pro.

And she is not interested in his world heavyweight belts, with her only concern being whether Fury is ‘healthy and happy’.

He told the Telegraph: ““She has never been to one of my fights, amateur or pro, and never been in the public eye at all.

“My mam doesn’t care if I’m world champion or not, as long as I’m healthy and happy.

“You could give my mother that table full of £50 notes and diamonds and it wouldn’t change who she is, ever.”

Meanwhile, Fury has hinted he could sensationally retire after being Wilder again.

He added: "I don’t know what’s going to happen.

"I’ve got one fight left on my contract with Top Rank and ESPN and we’ll see what that is.

"But I’m not thinking about boxing right now. I don’t know how many fights I’ve got left.