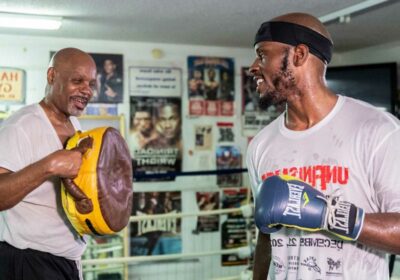 Tony Harrison, the one-time WBC light middleweight champion, leaned over the hospital bed and kissed his father on the forehead last April.

Ali Salaam, a noted boxing trainer, was hooked up to a ventilator in the COVID-19 unit at University of Michigan Hospital and his condition was declining fast.

“I told him, ‘Pops, you a fighter, you’ve always been a fighter,’" Harrison said. “I said, ‘You got one more round left in you, man. I need you to give it to us right now. But if not, you fought a good fight and I’m proud of you.'"

After a visit at the hospital, Harrison said, he and his older brother, LJ, left their father’s room and headed down the hallway when the nurses called out.

Almost a year later, Harrison, 30, will enter the ring without his father in his corner. Instead, his older brother, LJ, will be there Saturday when Harrison fights for the first time since his father died.

The bout between Harrison (28-3 with 21 knockouts) and Bryant Perrella (17-3, 14 knockouts) will be the super welterweight main event on Fox PBC Fight Night.

“My dad, he did an amazing job preparing me to be out of my life,’’ Harrison said. “He did a great job by raising us, making us strong men.

“And come the 17th, you’ll see that me and my brother just dedicate our time and emotion and everything that we work for straight to him.’’

Under his father’s watch, Harrison made his professional debut in 2011 with a TKO victory over Uwe Tritschler and climbed the ranks. He won 21 fights in a row.

In 2018, with a record of 27-2 and 21 knockouts, Harrison got a shot against Jermel Charlo, then the WBC lightweight middleweight champion.

With his father in his corner, Harrison prevailed with a unanimous decision, won the championship belt and burnished the family’s boxing history.

His father was the son of Henry Hank, a middleweight and light heavyweight contender who boxed from 1953 to 1972. Salaam was professional welterweight from 1984 to 1989 and compiled a record of 11-7 with five KOs.

Harrison said he carries his father’s legacy outside the ring as much as inside the ring.

“The man in me is the structure from him,’’ Harrison said. “Always look a man in the eye when you talk to him. Never lie, never steal. You would never catch me do anything differently.’’

Salaam, who converted to Islam and took on a Muslim name when he was 18, openly discussed the inevitability of death with his sons. He stressed that one day they have to carry on, and that day came April 20 when Salaam succumbed to COVID-19.

“The next day I got Tony up and we’ve been working out nonstop,’’ LJ Harrison said. “Tony knows how I feel about this. My dad, he told me a long time ago, ‘If you’re a professional, no matter what happens to me, you need to get up and go to work.’

“When my dad died those were the first words than came to my mind.’’

About two years ago, LJ Harrison was playing professional basketball overseas when he got a call from his mother, Aisha Harrison-El. She told him Salaam was slowing down and it was time for him to come home to Detroit and begin working with Salaam at the family gym, SuperBad Boxing Gym.

So LJ Harrison returned, took over responsibilities as Tony Harrison’s strength and conditioning coach and studied his father train Tony Harrison and fighters.

“He would watch his dad from the shadows, and actually LJ was becoming more and more involved with all the pad work, all the boxing, and my husband was starting to slow down a little bit due to age,’’ Harrison-El said. “So LJ was already there. He was just in the background.’’

After his father died, LJ Harrison took over as his brother’s head trainer.

“What better person to have in my son’s corner to protect him than his older brother?’’ Harrison-El said.

Until the pandemic, there was no reason to think that transition would take place anytime soon.

Harrison-El said she contracted COVID-19 in the second week of March 2020 and at one point feared she would die. As she struggled to breathe, she said, Salaam took care of her and never wore a mask.

“At that time we weren’t told to wear masks,’’ she said, but added that she and Salaam limited their contact with each other while she was sick.

At the end of March, she said, Salaam had to be rushed to the hospital because he was struggling to breathe. He returned three days later and was hospitalized for 19 days before he died, Harrison-El said.

Though LJ Harrison said they think Salaam contracted the coronavirus while he was taking care of Harrison-El, she said Salaam got it at a food giveaway after she was healthy again.

“I was begging him, ‘Don’t go out there. We have toilet paper, we have everything we need. You don’t have to go out there and get anything else.’ ” Harrison-El said. “And he was like, ‘No, no, they’re having a food giveaway and I know some people that really need food.’

“At that time we weren’t told to wear masks or protect ourselves in the stores or the food line and the pantry lines or what have you. Three days after he was in a pantry line and previously helped two or three other people put food in their house, he came down sick with it.’’

More than a boxing trainer has been lost to the virus that has killed more than 550,000 people in the United States.

“Every time I think about him, I just miss the time he spent with my kids,’’ said Harrison, who has a 5-year-old son and 2-year-old daughter. “He was just a great grandad.’’

Harrison said he’s prepared to move on without his father when he enters the ring at Shrine Auditorium and Expo Hall Saturday and ends a 16-month layoff.

“I’m just looking forward to getting back in there," he said, “and displaying the technique that he gave me as a fighter."