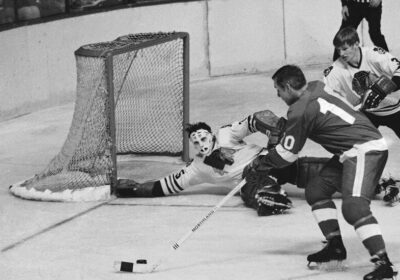 Tony Esposito, who as a rookie in his first of 15 N.H.L. seasons as the Chicago Blackhawks’ goaltender recorded an astonishing 15 shutouts, earning the nickname Tony O, died on Tuesday, the Blackhawks announced. He was 78.

The cause was pancreatic cancer, the team said. It was not immediately clear where he died.

Esposito, who played all but 13 games of his 16-season N.H.L. career with Chicago, joined the Blackhawks for the 1969-70 season, winning the Calder Trophy as the rookie of the year and the first of three Vezina Trophies as the league’s best goaltender. He was an early pioneer of the butterfly style of goaltending — dropping to the knees and spreading out the leg pads — in an era when stand-up was prevalent.

Esposito was inducted into the Hockey Hall of Fame in 1988, four years after his older brother Phil, a forward who was one of the most prolific scorers in N.H.L. history with Chicago, the Boston Bruins and the Rangers. In 2017, as the N.H.L. approached its 100th anniversary, both Tony and Phil Esposito were named among the league’s 100 greatest players.

Esposito, who won a Stanley Cup with Montreal in 1969, was instrumental for Chicago in two trips to the finals, in 1971 and 1973, but the Blackhawks lost to the Canadiens on both occasions.

In the 1969-70 season, Esposito recorded 15 shutouts, an unrivaled mark for the modern era of the N.H.L. George Hainsworth holds the record for most shutouts in a season, recording 22 during the 1928-29 season with the Montreal Canadiens. Two other goalies from the 1920s share the mark of 15 shutouts in a season.

“Tony was one of the most important and popular figures in the history of the franchise as we near its 100th anniversary,” Rocky Wirtz, the team’s chairman, said in a statement. “Four generations of our family — my grandfather Arthur, my father Bill, my son Danny and I — were blessed by his work ethic as a Hall of Fame goalie, but more importantly, by his mere presence and spirit.”

Gary Bettman, the N.H.L. commissioner, said in a statement, “From his arrival in the Windy City in the late 1960s through an illustrious playing career and decades as a franchise icon, Tony left an indelible mark — both on the ice and in the community — over the next 52 years.”

Anthony J. Esposito was born on April 23, 1943, in Sault Ste. Marie, Ontario, the son of Patrick Esposito, a manager for a steel company, and Frances DiPietro.

He wanted to be a hockey player, “as long as I can remember,” and after school and on weekends, the two brothers — Phil is 14 months older — would shuffle to the rink with their gear loaded on a toboggan.

Esposito attended Michigan Technological University, where he was a three-time first-team All-America selection, and where he helped the team win the 1964-65 N.C.A.A. championship. Esposito reached the N.H.L. at a time when playing in college was not generally seen as a path to professional hockey.

With a bachelor’s degree in business, he tried his luck as a professional hockey player. “I’ll give it three years and see what I can do,” he recalled in an interview for the Hockey Hall of Fame.

After two seasons in the minor leagues with Vancouver and Houston, he started his first N.H.L. game with the Montreal Canadiens against his brother’s Boston Bruins. The game ended in a 2-2 tie, and Phil Esposito scored both goals. His mother accused him of trying to ruin his brother’s career before it even started, but Phil assured her that his brother had done well.

The following season, Tony Esposito was claimed on waivers by Chicago.

During the years when he commanded the Blackhawks’ net, playing behind future Hall of Famers like Bobby Hull, Stan Mikita and Denis Savard, he won more than 400 games with a single team. He is one of just three goalies with that distinction, in addition to Martin Brodeur with the Devils and Henrik Lundqvist of the Rangers.

After retiring as a player in 1984, Esposito was named the general manager of the Pittsburgh Penguins in 1988. In his first year with the Penguins, Esposito led the team to the Stanley Cup playoffs, ending a six-year postseason drought.

In addition to his brother, survivors include his wife, Marilyn; his sons, Mark and Jason; and his grandchildren, Lauren and Kamryn, according to the Blackhawks’ statement.

Esposito later became a scout for the Tampa Bay Lightning, which Phil Esposito helped found. In a statement on Tuesday, the Lightning said Tony Esposito played an “integral role in laying the groundwork for a successful franchise in the Sunshine State when many thought it was impossible.”

In 2017, Phil Esposito told NHL.com that Tony “handled a lot of the details” as a Tampa Bay scout.

“After all,” his brother said, “Tony is the one who went to college.”