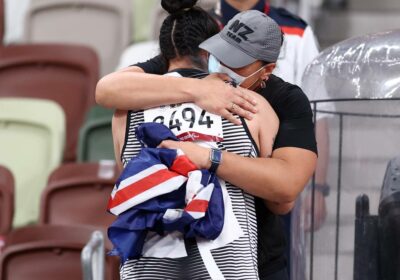 When six rounds were complete and Lisa Adams saw her name at the top of the leaderboard in the women’s shot put (F37) at the Paralympic Games, a dream had been realised.

She sought out her coach and sister, Dame Valerie, and the two shared an embrace before Adams had the New Zealand flag draped around her shoulders.

It was a moment she won’t soon forget.

“I couldn’t do this without her, so that was special in that moment. She’s been my coach throughout, but that hug was definitely a sister hug. She put the flag on me and that whole moment, it was so special. I really, really loved that.”

Adams’ Paralympic gold is the latest in a growing collection of sporting feats for the Adams family. It matches the gold medal she won in the event at the world championship in Dubai in 2019, and adds to the family’s haul in Tokyo after Dame Valerie claimed the bronze medal in the women’s shot put at the Olympic Games earlier in the year.

It was Dame Valerie’s fourth Olympic medal in the event, with gold in 2008 and 2012, and silver in 2016, adding to an impressive medal collection from her career.

In the NBA, Steven Adams has made a name for himself as one of the toughest players in the world’s top basketball league since being named to the NBA all-rookie second team in 2014.

After seven seasons playing with the Oklahoma City Thunder, during which he earned a contract worth more than $100m, he was traded to the New Orleans Pelicans ahead of the 2020-21 season, and has since been moved to the Memphis Grizzles. In recent years, he has taken on the role of a mentor to younger players around him, and was recently seen working out with rookie big man Evan Mobley, who was drafted with the third overall pick by the Cleveland Cavaliers in this year’s NBA draft.

While Lisa Adams has added a gold medal to her collection, her campaign at the Paralympic Games isn’t over. She is also entered into the discus (F38) event, which will see medals won on Saturday.

“Discus is fairly new,” Adams admitted of her next event. “That’s a fun event for us so we haven’t had a lot of training. But we’re still looking to go out and do our best and see how we go.”