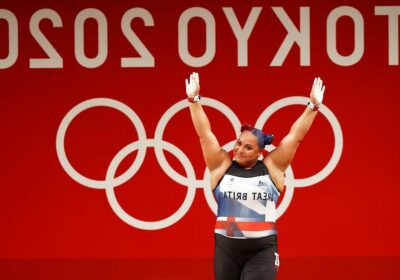 As the green light flashed and the buzzer sounded, Emily Campbell’s grimace gave way to a shriek of delight. She had cleared 161kg in the final clean-and-jerk round, only the second competitor to do so in this women’s super-heavyweight final, and it had secured her a hard-earned silver medal.

Campbell may not have been considered a leading medal contender had these Games been staged a year ago, but Nottingham-born 27-year-old showed her form when she clinched the European title earlier this year in Moscow. Her medal is Britain’s first of any colour in women’s Olympic weightlifting on a historic night in many ways.

China’s all-conquering Wenwen Li broke the Olympic record to claim gold in a dominant display at the Tokyo International Forum, while New Zealand’s Laurel Hubbard, the first openly transgender woman to compete at an Olympic Games, made a quick exit after failing to register a lift in the opening snatch round.

Campbell was in the dreaded fourth position on the leaderboard after the snatch, having taken two of her three attempts to clear 122kg. Korea’s Son-Mi Lee registered 125 and America’s Sarah Robles lifted 128, while the world record holder Li posted a huge 140 – an Olympic record in its own right.

But Campbell would not be denied and stormed back into medal contention in the clean-and-jerk round. Campbell lifted 150kg with her first attempt, then needed 156 with her second to guarantee bronze after Lee had failed in her final attempt at 155. Campbell produced it, then came back for one last lift to try and clinch silver.

She set the bar at 161kg, enough to edge out Robles, and although he feet twitched under pressure she clung on until the buzzer.

After a delighted Campbell had left the stage, Li returned for some showboating. First she posted a clean-and-jerk Olympic record of 173kg, before returning to lift 180 to improve the mark. Her total of 320 across the two rounds was an Olympic record in itself of course, 15kg short of her own world record. Campbell totalled 283 and Robles took silver for the USA with 282.