Japan surpassed 10, 000 daily Covid infections for the first time on Thursday leaving health officials in the country rattled as they battle to get the outbreak under control.

Prime Minister, Yoshihide Suga said that the government will decide on Friday whether to declare regional states of emergency in response to calls from some prefectures amid the worsening situation.

For a third day running, Tokyo reported a record number of daily Covid-19 infections: the host city for the Olympics recorded 3,865 new cases today, up from 3,177 on Wednesday, 2,848 on Tuesday, and 1,970 a week ago. Today’s numbers are almost double last week’s.

Prefectures close to Tokyo, such as Kanagawa, Saitama, Chiba, and Ibaraki also recorded a significant rise.

“We have never experienced an expansion in the infections of this magnitude,” chief cabinet secretary Katsunobu Kato said on Thursday, the AP reported.

Prime Minister Yoshihide Suga today invited heads from five ministries, including the ministry of health, for an emergency cabinet office meeting. The government is considering  extending the current state of emergency declaration beyond Tokyo to surrounding prefectures, excluding Ibaraki, and increasing restrictions in Osaka and Hokkaido.

Equally worrisome for the organisers of the Tokyo 2020 Olympics, which kicked off less than week ago, is the record-breaking daily infections directly connected to the Games.

Twenty-four people with Olympics accreditations tested positive for Covid-19, including three athletes and 15 contractors, the Asahi Shimbun reported today. At least two of the victims, who are from abroad, were hospitalised, according to Reuters.

“While almost nothing is helping to slow the infections, there are many factors that can accelerate them,” government advisor Shigeru Omi, said, referencing the ongoing Games, and a recent four-day holiday weekend in Japan.

“The biggest risk is the lack of a sense of crisis and without it, the infections will further expand and put medical systems under severe strain.” 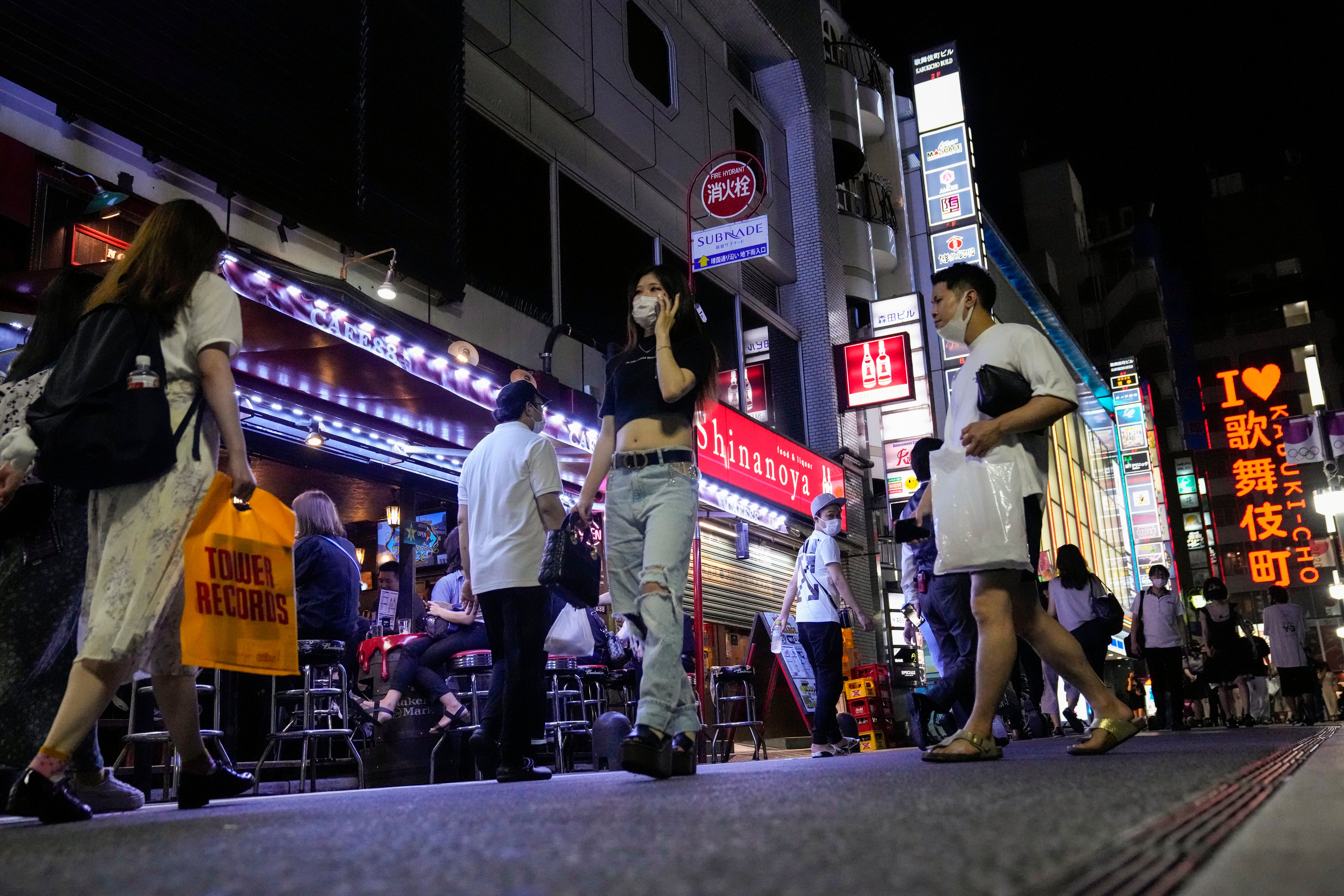 People walk around and gather at a bar after government imposed 8 p.m. closing time for restaurants and bars under Tokyo’s fourth state of emergency

Omi’s comments come only a day after another government official poured cold water over  the suggestion that the Games, which officially opened on July 23, six days ago, may be a contributing factor in the rise in infections.

“I don’t think there have been any cases related to the Olympic Games. So we aren’t worried about that issue,” Japan’s vaccine minister, Taro Kono, told the AP on Wednesday.

However, such has been the alarm today that governors in three prefectures bordering Tokyo confirmed that they plan to ask the prime minister, Yoshihide Suga, to place their regions under a state of emergency.

Tokyo had already declared a state of emergency in the run up to the Games, from July 12 to August 21, its fourth declaration since the pandemic hit Japan in early 2020, but to no avail.

Experts say that the recent spike in infections is partly due to the highly contagious Delta variant of the virus, which has been spreading in Japan, and has caused around 30 percent of recent infections, the AP and national broadcaster NHK reported on Wednesday.

Less than twenty-four hours ago, the Governor of Tokyo, Yuriko Koike, had urged young people to support social distancing and sanitation measures put in place as part of the state of emergency.

Koike had noted that most of the elderly have been vaccinated in Japan, and that recent cases of infections were predominantly among the young.

“Younger people’s activity holds the key (to slowing the infections), and we need your cooperation,” Koike was quoted in the AP. “Please make sure to avoid nonessential outings.”

The state of emergency declaration calls for social distancing, reduced opening hours and suspension of the sale of alcohol in bars and restaurants, and avoidance of non-essential travel after 8 p.m. However, many have ignored the request to socially distance themselves.

“We are coming off a four-day weekend in Japan and the Olympics opened [a few] days ago. Massive numbers of people gathered outside the stadium to watch the fireworks and hear the music, even though they were kept out of the stadium as a safety precaution,” says Japan expert and author, Jake Adelstein. “People are not taking precautions.”

“The younger generations are largely unvaccinated, and that’s why those in their 40s and 50s are increasingly getting infected and being hospitalised,” Ryuji Wakita, the director general of the National Institute of Infectious Diseases, and head of a government advisory board, told the AP.

If the trend continues, Wakita and other health officials worry that Tokyo’s nearly 3,000 hospitalised patients will rapidly fill up the remaining available beds, putting even more pressure on a healthcare system that is already stretched.

Since the pandemic hit Japan in early 2020, the country has recorded a total 206,745 Covid-19 infections. 25.5 percent of the population, mostly elderly, have been fully vaccinated,  compared to 49 percent in the US and 60 percent in the UK.