Home » Sport » Tokyo Olympics 2020: While You Were Sleeping – Day three

Tokyo Olympics 2020: While You Were Sleeping – Day three 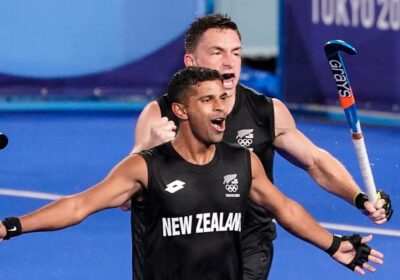 All the action from the second day of the Tokyo Olympics that you may have missed late last night.

17-year-old Erika Fairweather last night swam the race of her young life in the 400m freestyle heats in Tokyo, qualifying with the fourth-fastest time for this afternoon’s Olympic final.

Fairweather set a new national record with a rapid effort from lane eight at the Olympic Aquatics Centre, stopping the clock at 4:02.28 to best the previous mark set by Lauren Boyle at London 2012 by more than a second.

The Black Sticks men got their Olympic campaign right back on track, edging a seven-goal thriller against Spain.

Jacob Smith’s goal three minutes from fulltime proved the winner in an action-packed encounter in Tokyo, helping New Zealand to a 4-3 victory.

The Oly Whites suffered a bitter – and slightly bizarre – defeat to Honduras, leading for most of the match but ultimately going down 3-2.

The New Zealand side had the game under control with less than 15 minutes to play, before conceding two late goals.

It was a genuine heartbreaker, as the Kiwis had scored two goals of the highest quality – including a 30 metre stunner by Liberato Cacace – but gave up three soft ones.

Goalkeeper Michael Woud had a game to forget, with a portion of the blame for all three goals conceded.

Kiwis tennis players Michael Venus and Marcus Daniell have progressed to the second round of the doubles event in Tokyo, after a comfortable win over a Belarus combination.

It probably should have been over quicker, but Venus and Daniell failed to convert any of their six break point opportunities in the second set.

A 25-game Olympic winning streak for the Team U.S.A is over, ending Sunday when France closed the game on a 16-2 run to beat the Americans 83-76. Evan Fournier’s 3-pointer off a broken play with just under a minute left put France ahead for good, as the Americans simply fell apart in the final minutes.

The Americans lost for only the sixth time in 144 games at the Olympics all-time, and fell to 53-4 in the Olympics with NBA players on the roster.

New Zealand is still without a medal. Boooo.

China leads the way with six gold and 11 medals in total. Hosts Japan sit second with five gold and a silver.

Fairweatherraces in the 400m freestyle final. Other Kiwis with a chance of claiming a medal today include triathletes Hayden Wilde and Tayler Reid, with Wilde an outside hope of a medal, ranked 10th in the world.

Mountain biker Anton Cooper will be looking to cause an upset in his medal race, with the $67-1 outsider hoping to upset all-around superstars Mathieu van der Poel and Tom Pidcock in the cross country mountain bike event. Given what happened in yesterday’s women’s road race, where a $500-1 amateur won, anything is possible…

Other notable Kiwis to watch include surfers Ella Williams and Billy Stairmand, who have tough round of 16 contests today – weather permitting – after doing well to progress through the heats yesterday.