Home » Sport » Tokyo Olympics 2020: Lisa Carrington – ‘I’m still in a bit of disbelief about what I achieved’

Tokyo Olympics 2020: Lisa Carrington – ‘I’m still in a bit of disbelief about what I achieved’ 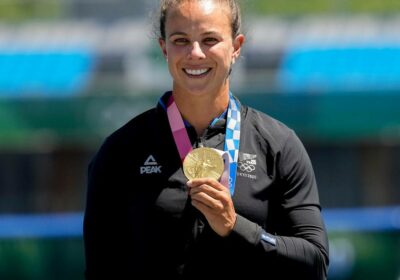 Lisa Carrington won, and won and won again at the Olympics. In fact, she probably needs another house to keep them all in.

Carrington, who joined Te Ao Toa live from MIQ in Ōtautahi, Christchurch on Sunday, said her quarantine was “going alright”.

“I think I’m getting a bit of cabin fever but I think it’s kind of normal when you’re used to being outside doing what you enjoy.”

The triple gold medalist said she is still in “a bit of disbelief” about what she has achieved.

“Still now it’s just crazy to think what I’ve been able to achieve, but I totally couldn’t have done it without my team, my coach, all these people that supported me.”

Of the three events she won gold medals for, Carrington said the K1 500 was her toughest challenge.

“It’s a real test for me. It’s everything, it’s fitness, strength and it requires so much courage because it hurts so much. It’s a tough, tough race.”

Carrington said she is grateful for the support from home that has helped her on her journey.

“I guess at times it’s quite overwhelming when you’ve got so much support from whānau and friends. but it’s awesome having it there all the time, not just in the moments where we’re at the Olympics, it’s on TV, high pressure. It’s kind of having a constant reminder and grounding of identity and where I’m from because the battles are often during the journey, turning up every day for training.”