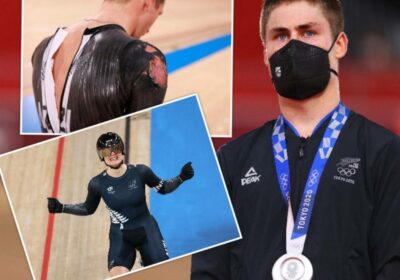 A heartbreaking story had a silver lining after all – 24 hours after the men’s team pursuit crashed out of what was almost certain to be a bronze medal, the runner-up got runner-up.

Campbell Stewart stepped up for the Omnium in the place of the injured Aaron Gate and took his opportunity. And while many fans were surprised by his come-from-behind win, I wasn’t.

Campbell has been Omnium world champion before so it’s nothing new to him. He was probably excited at the opportunity to have a crack. Going into these Games, he knew Aaron would be the one taking that spot, so being called up last-minute would have provided plenty of excitement for him.

Full Kiwi schedule below. Click on a name to see athlete’s bio, upcoming events, past Games performance and medal chance.

The NZ team would have had a tough 24 hours before the race and Aaron going out the way he did – falling with 1700m of the 4000m race left – would have brought the whole team down.

Watching on your screen, you can’t know how much a crash at that speed would have hurt – physically.

Imagine getting in your car and, as you are driving through town at 60km/h, suddenly fling open your door and jump out… That’s what it feels like to crash at high speed in the velodrome.

But unlike in that situation, you aren’t prepared for the pain when you’re riding. It happens in the moment, and you get that massive spike of adrenaline. With the burns, the pain really starts to set in when the doctors are cleaning them with iodine and a metal scrubber trying to get all the pieces of wood out. That’s when you feel the effects of the crash much more than you do when you’re out there.

It’s just one of the things you risk with these super-aggressive, aerodynamic positions; you just don’t see where you’re going as much. That’s the idea, to reduce your drag. By not looking up, your head stays down. Unfortunately, in the race on Wednesday night, Aaron just got too close to the guy in front of him – and went down.

The way Campbell picked himself back up to get silver in the Omnium, however, will reverberate throughout the team and get the boys up for the Madison on Saturday.

It’s a similar case with the women’s – Ellesse Andrews claiming a brilliant silver in the Keirin final. In the first few rides, she would immediately go to the front and try to control the race – as there are no distractions, no fear of knocking into people and she can showcase all the horsepower she has.

The Keirin final was tactically different, though. Ellesse instead followed the Dutch rider around and had a last-ditch attempt to get the gold. I think this was a smart move given the fatigue that would have been setting in by then.

If she had gone out in her typical fashion, I have no doubt she would have finished last, based on how the race played out. Ellesse played it brilliantly – using the other rider to get to the front, and then had a crack at the medal.

I’ve known her for a while now and for her it’s just about keeping her mind clear and cruising. She has the best time and it’s quite refreshing to see an athlete that performs so well and is so relaxed during that high-pressure moment.

Plenty of athletes work themselves up, they’re going through processes, they’re imagining the race in their head before they go out; but Ellesse will just be chilling, chuck her helmet on, go out and race, come back and just be chilling again.

I think that’s a really big asset because it stops her from overthinking – which can create doubt, a plan that is too fixed, and one you can’t adjust. In the unpredictable sport of track cycling – and especially the Keirin – that is never a good idea.

We could see on Thursday night the effect the performances of Ellesse and Campbell had on their teammates. These guys should have been resting, rather than be trackside screaming their lungs out and being the first to congratulate the pair.

They would have left the velodrome full of adrenaline just from watching it and they’ll take that into the next day. With the Madison and women’s Omnium still to come, it could spur them on to produce some more big performances.

As I said, track cycling is unpredictable – but I wouldn’t bet against it.