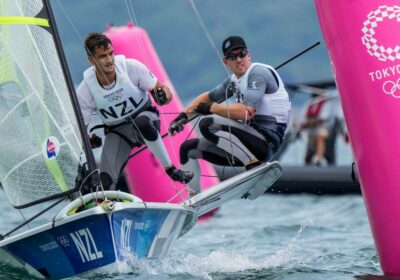 New Zealand’s proud history in Olympic sailing won’t continue by chance – the demise of our windsurfing is evidence of that.

This Olympic regatta has emphasised the way nations have built a legacy of success in specific sailing classes.

The key ingredients in a winning recipe are consistent coaching and a training partner system that keeps the success alive through generations.

This recipe delivered a magnificent seven Olympic windsurfing medals for New Zealand from 1984 to 2012. It was a dynasty that involved coach Grant Beck, Bruce and Barbara Kendall, on to Aaron McIntosh, and then Thomas Ashley.

Yet not only did our windsurfing success come to a screeching halt, but it has also been used to build a dynasty in another nation.

McIntosh has coached the Netherlands to the last three gold medals in the men’s windsurfing, and he deserves the kudos for that.

But it is pretty irksome to think that his outstanding coaching talent and Olympic medal heritage is benefiting someone else. New Zealand, meanwhile, does not even have a competitor in windsurfing in Tokyo and had none at Rio five years ago.

Hopefully, a new dynasty can be re-established when windfoiling replaces windsurfing at the next Olympics. We already have a training squad of six under the guidance of JP Tobin.

But the lesson – for all of our sailing classes – is there to see.

For New Zealand to be able to continue with its proud Olympic heritage, Yachting New Zealand needs to go back to the future and further invest in high-quality coaches and retain them in specific classes over multiple Olympic cycles. These coaches need to partner the experienced campaigners nearing the end of their competitive careers with the emerging talent. The result can be an Olympic dynasty worthy of our sailing nation.

Sailing is a sport that can really do your head in. There are so many variables that influence races. Strong minds have been critical at these Olympics.

The top crews at Enoshima have been able to manage the risks, deal with the things that go wrong – especially mistakes – and reset mentally to improve performances.

It’s very difficult to not beat yourself up when you make a mistake and you drop places on the racecourse. All great Olympic sailors remain calm and self-manage their minds.

A great example has been the work of Peter Burling and Blair Tuke. They haven’t dominated like Rio, and appeared to be struggling initially. Mistakes such as Burlingfalling off the boat and Tuke needing pick him up can severely dent the confidence. But they have kept chipping away and find themselves on top of the leaderboard at the business end. Impressive.

Josh Junior has not been on fire but he is also slowly improving and has a decent shot at the Finn podium in the medal race.

The surprise medal contenders are Paul Snow-Hansen and Daniel Wilcox in the men’s 470 class.

This is their second Olympics as a pair (Snow-Hansen competed in London with Jason Saunders). They have always been solid performers rather than medal contenders. But they began this Olympic regatta strongly and have been very consistent over the range of conditions. They are a good medal chance.

That’s really it in terms of medal hopes. Alex Maloney and Molly Meech made a terrible start and missed the medal race.Sam Meech had a poor regatta by his standards. Micah Wilkinson and Erica Dawson, Olympic debutants and the youngest team members, were a long shot and particularly after Erica broke her leg in training six weeks before the Games. Just to make the start line was a major achievement.