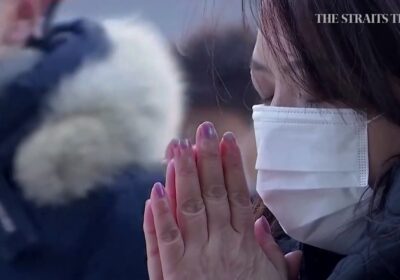 TOKYO • Japanese Prime Minister Yoshihide Suga yesterday insisted his government was still committed to holding the coronavirus-postponed Tokyo 2020 Olympics this summer, saying the Games would not only be “proof that mankind overcame the virus” but deliver “hope and courage” to the whole world.

However, authorities are set to declare a state of emergency in Tokyo and three adjoining prefectures as infections and the number of people in serious condition reach record levels.

The capital yesterday reported almost 900 new Covid-19 cases, while there are about 110 people with serious symptoms.

The nationwide weekly case total has increased for 14 straight weeks, while the death toll in that period has increased 10 times.

Domestic media reports say the state of emergency could be declared as early as Thursday.

Should Japan again issue a state of emergency – the first was declared in April – as requested by Tokyo and three neighbouring prefectures to combat the spike, it is bound to have a serious impact on the Games.

With 199 days to go, another such measure would hinder local athletes’ training for the Olympics, due to start on July 23 following an unprecedented one-year delay, while reigniting the debate about whether they should be held at all.

Japan has barred entry from all countries, excluding Japanese nationals and non-Japanese residents, until the end of the month, and special procedures developed to expedite the safe entry of oversea athletes have been partially suspended.

Last year’s state of emergency was lifted in Tokyo by the end of May. Until that time, Tokyo’s National Training Centre, a key component of Japan’s strategy to achieve Olympic success, was effectively shuttered.

With less than seven months before the Olympics, a similar situation would represent a huge hurdle to many athletes’ preparations.

Enthusiasm for the Games is also not building, with recent polls still showing a majority of respondents favouring either another delay or an outright cancellation.

Days until the rescheduled Tokyo Olympics.

Netizens also expressed their frustration on social media over the tightening of Covid-19 countermeasures.

One user, Mii Mama, tweeted: “This morning the news said it’s 200 days till the Olympics, and in the afternoon, that there could be another state of emergency. What’s going on?”

But despite the worsening crisis, International Olympic Committee president Thomas Bach remains hopeful Tokyo can get a handle on the situation.