Home » There’s no excuse for Yankees to look this broken

There’s no excuse for Yankees to look this broken 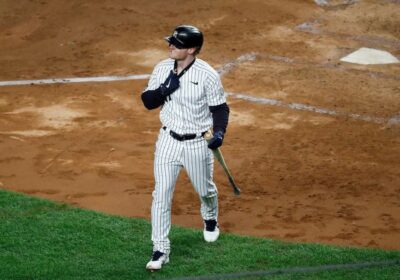 How the Yankees can address their crappiness

The 2021 Yankees have seen that concept and raised it: Their (bleep) isn’t working at all.

What an embarrassing display of baseball Friday night at Yankee Stadium. What a shocking, distressing start to the Yankees’ season. This early in the schedule, they are threatening impressively to post the sort of nightmarish campaign, with the attendant consequences, they haven’t registered in a generation.

Their return home marked a new low point, an 8-2 debacle of a defeat to the rival Rays that featured three errors, three hits and enough boos — all of them deserved — from the announced Yankee Stadium crowd of 10,202 to fill a non-pandemic sellout crowd. Naturally, a few fans ultimately debased themselves, too, by throwing baseballs onto the field in the bottom of the eighth inning, prompting a delay in play and a polite urging from public-address announcer Paul Olden to quit the nonsense.

“We’ve got to pick it up,” Giancarlo Stanton said. “We can’t keep rolling this same look out there.

“As we talk about all the time, we know adversity is coming for you,” said Aaron Boone, who acknowledged holding a team meeting afterward. “We’ve got to answer it.”

The adversity wasted no time this season. The loss, their third straight, dropped the Yankees’ record to 5-8, worst in the American League, and let’s take just one deep breath here: They began 2019 with a 5-8 mark, and 6-9, before rising and finishing a comfortable 103-59. It is still ridiculously early. That group, however, held a heck of an excuse and therefore carried a different vibe: It was absolutely ravaged by injuries. The fans’ anger turned toward the club’s medical personnel, not the players, manager or general manager.

What’s going on now feels quite different. If not 100 percent healthy — you are seen, Luke Voit and Zack Britton — this group features more than enough healthy players with eye-popping track records that convinced the Las Vegas oddsmakers as well as the statistical projection services to cast these guys as AL favorites. Instead, two-plus weeks into the season, they appear a wobblier mess than “Joey” (the “Friends” spinoff, remember?). If Abner Doubleday were alive to see Friday night’s fiasco, he’d regret pretending to invent the sport.

Against Michael Wacha, the Cardinals phenom turned Mets bust who brought a 2021 ERA of 7.00 to the mound, the Yankees’ righty-heavy lineup flailed as if they were getting paid by the whiff, striking out nine times, tallying only two walks and a Gio Urshela single in six innings and not even advancing anyone to scoring position. Their ragtag pitching crew of Nick Nelson (one inning, two runs) and Michael King (three innings, no runs) made those turns at the plate relevant, keeping the game at 2-0, until the top of the fifth, when Luis Cessa relieved King and the Rays plated four runs thanks in no small part to errors by Gio Urshela and Rougned Odor (his second of the night). Brutal. Only Stanton’s two-run blast in the seventh prevented a shutout and provided any representation of this team’s talent.

What in holy hell is happening with these guys? It’s as if, in return for relatively good health, they sacrificed their skills. They’re not hitting or fielding at close to acceptable levels, and their pitching, their best asset to date, will occasionally break from the resulting pressure, as it did on this night.

They seem, in short, broken. The name of their architect, Brian Cashman trended on Twitter, angry supporters making their top target clear, as the last out arrived.

“Obviously him addressing us means that we need to play better,” Clint Frazier said of Boone. “I think everyone took the thought of, ‘We have to come to the ballpark tomorrow ready to go, because the team we’re playing will come ready to go.’ ”

Statistically, it’s anything besides a lost cause. Aesthetically, though? The Yankees, who have experienced their own postseason heartbreaks recently, must figure out a way to get their (bleep) working again in the regular season. To be ready to go. The alternative is pretty dire.