Home » Sport » The Sabres Are Restoring Hope in Buffalo, but for How Long?

The Sabres Are Restoring Hope in Buffalo, but for How Long? BUFFALO — Outside KeyBank Center, home of the Buffalo Sabres, three bronze statues of the so-called French Connection line recall a time when Rick Martin, Gilbert Perreault and Rene Robert led the team to its first appearance in the Stanley Cup finals in 1975.

Since then, the Sabres have been back to the finals only one other time, in 1999, and the specter of Brett Hull’s foot-in-the-crease, Stanley-Cup-winning goal for the Dallas Stars that year still haunts this team and the city.

The Sabres have finished last in the N.H.L. standings three times since the 2013-14 season. They have not made the postseason since 2011.

Even the Bills, the Sabres’ N.F.L. neighbors who wrote the book on sports heartbreak with four straight Super Bowl losses in the 1990s, ended a 17-year playoff drought last season.

But hope, as shaky as it can be here, returned under Coach Phil Housley after a franchise-record-tying 10-game winning streak last month.

Housley, the second-year coach, said the fans “ got that excitement and energy back, which is great for us because we feed off their energy.”

But the fact is, the N.H.L. season is a marathon at 82 games. Buffalo (17-9-4) stumbled to five losses in a row after their win streak ended on Nov. 29 against the league-leading Tampa Bay Lightning.

Signs that the winning streak might be a mirage were present. The Sabres won nine of those games by one goal, and seven victories came in overtime or in shootouts.

And long regular-season winning streaks are not often markers of champion teams. Six times N.H.L. teams have had winning streaks of 14 games or more. Only the 1981-82 Islanders turned that momentum into a Stanley Cup, although most of those teams still had a strong playoff run.

One exception was the Columbus Blue Jackets, who in the 2016-17 season were one win from tying the N.H.L. record of 17 straight victories. But the down the stretch, the Blue Jackets lost six straight and were defeated in the first round of the playoffs. 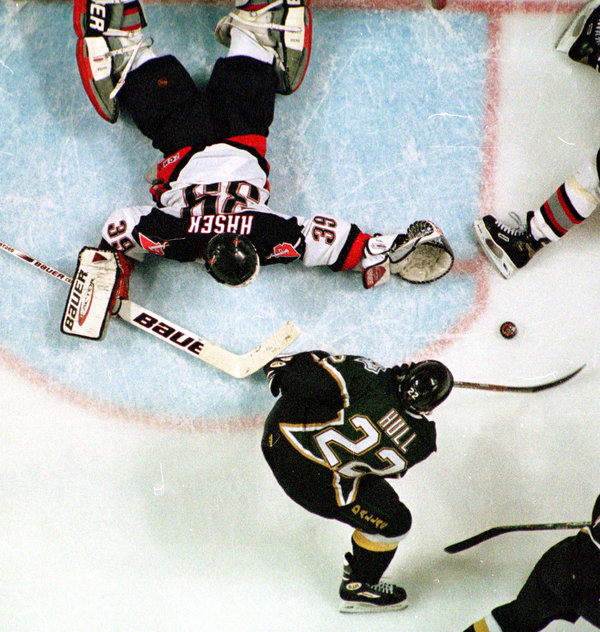 Look at the Sabres’ own history with 10-game winning streaks, having accomplished the feat twice before.

In 1983-84, Buffalo fell into a six-game winless streak soon after rolling up 10 straight wins. That team lost in the first round of the playoffs. And in 2006-7, the Sabres started the season with 10 wins in a row, and made it to the conference finals that season, losing to Ottawa.

But Martin Biron, a former first-round draft pick by Buffalo, said this year’s Sabres had won the hearts of the city with their grit, pointing to a 5-4 comeback win over the Pittsburgh Penguins last month.

“They were down, 4-1, in Pittsburgh and battled back,” said Biron, a former goaltender and now a television analyst with the Sabres. “This is a blue-collar community that really respects hard work and a no-quit attitude. That game really sent a good message to the fans.”

The longtime Sabres forward Jason Pominville, who was reacquired last season, said he noticed the excitement around Buffalo when he took his 9-year-son, Jayden, to his hockey practices or games.

“When I walked in, everyone’s like: ‘Nice job, nice job. Keep it up, it’s been fun,’ ” Pominville said. “I usually get recognized, but now it’s at another level.”

This season is a sharp contrast to how last season ended in April, with center Ryan O’Reilly saying that the team was stuck in the mind-set of being “O.K. with losing.”

Within months, O’Reilly was traded to the St. Louis Blues for three players and two draft picks, including a first-rounder.

The Sabres’ fortunes turned around, according to Pominville, when the club won the draft lottery and selected the Swedish defenseman Rasmus Dahlin No. 1 over all.

“You could tell guys were excited because they were in town early before training camp, skating together, hanging out together,” Pominville said.

Housley, a first-round draft pick of the Sabres in 1982 as a defenseman, talked with each player this past summer and then leaned on a few alumni for help in changing the culture of the team.

He asked them to appear on camera in a video message to be delivered at training camp.

Housley took aside Danny Gare, a two-time 50-goal scorer, at the annual Sabres alumni golf tournament and asked if he would talk about what it was like to make it to the Stanley Cup finals in his rookie year in 1974-1975.

Gare spoke about the reception the team received after beating the Montreal Canadiens in the semifinals.

“I remember coming back from Montreal and there were 10,000 fans waiting for us at the airport,” he said. “It was unbelievable. The big part of the video was to let the players know that this is a good town to play hockey in, if you’re winning.”

In another move to reconnect to the past, photographs of Sabres greats were posted above each player’s locker stall.

Housley continues to set the tone. In mid-October, after a 4-1 loss to the Vegas Golden Knights, he called a team meeting the next day in San Jose, Calif.

“He was brutally honest with us,” Pominville said. “He held us accountable. I think it was good, and the boys responded the right way.”

Although the Sabres lost to the Sharks, Housley’s message sunk in. The next game, the Sabres routed the Los Angeles Kings, 5-1, which kicked off a three-game winning streak.

“We slowly started playing better, and it led us to having that long winning streak,” Pominville said.

The Sabres, who have the third-best record in the East, remain in playoff contention. But going into Tuesday night’s home game against Los Angeles, they understand there are emotional risks if their slide lasts much longer.

“We don’t want to get those feelings back that we had last year,” Pominville said.

Hutton, though, sees a difference in how teams prepare for the Sabres.

“The days of taking the Buffalo Sabres lightly,” he said, “have come and gone.”