Home » Sport » The Road to the Final Four Runs Through Zagreb

The Road to the Final Four Runs Through Zagreb 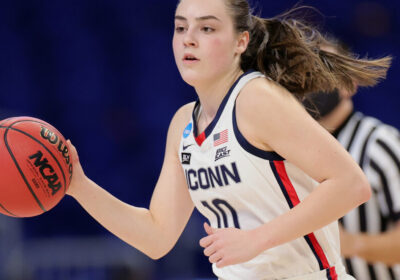 During a game at the 1998 Big East Conference women’s basketball tournament, Coach Geno Auriemma of Connecticut famously grew impatient with his international players, Svetlana Abrosimova of Russia and Tihana Abrlic of Croatia.

“That’s it!” Auriemma ranted on the sideline. “No more damn foreigners on this team! I can’t coach these guys.”

His mother, Marsiella, sitting behind the UConn bench, kindly reminded Auriemma that he was born in Italy.

“You can’t talk like that!” she told her son. “What if somebody said something like that to you, ‘No foreigners.’ You’re a foreigner. Now shut up!”

Auriemma laughed as he recalled the moment recently. Abrosimova became a three-time all-American who helped lead UConn to the 2000 N.C.A.A. championship. This season, another European player, Nika Muhl, a 5-foot-10 freshman from Croatia, is a starting guard on a Huskies team that features three international players, confirmation that they have become widely embraced across women’s college basketball.

In the last decade or so, UConn and other top programs have increasingly sought players from Europe, Canada, Australia and Africa, as a growing parity in college basketball has made recruiting increasingly competitive. There were four different women’s champions in the four seasons before the coronavirus pandemic canceled the 2020 N.C.A.A. tournament.

All four No. 1 seeds in the 2021 women’s tournament — Stanford, UConn, North Carolina State and South Carolina — listed at least one international player on their rosters. South Florida, another tournament team, listed 11, along with a player from Puerto Rico.

UConn (25-1) is seeking its 12th national title with a roster that includes two Eastern Europeans — Muhl, who injured her ankle in the Huskies’ first-round win on Sunday night, and Anna Makurat, a 6-foot-2 sophomore guard from Poland — and Aaliyah Edwards, a 6-3 freshman forward from Canada. They are three of only 12 players from outside the United States signed by Auriemma in his 36 seasons coaching at UConn.

“If you don’t have international players, you’re almost behind the ones that do,” said Blair Hardiek, global technical director for the N.B.A. Academy Women’s Program, a development project for international athletes. 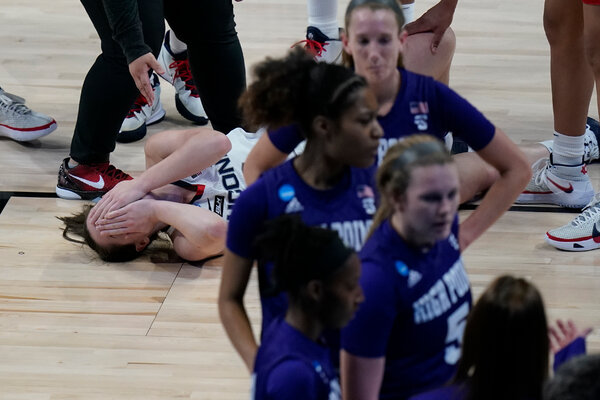 In UConn’s tournament opener on Sunday, Muhl sprained her right ankle in the first half and missed the remainder of a 102-59 victory over High Point. Her father said in a text Monday morning that the results of an X-ray were “OK,” but she was on crutches after the game and her availability for Tuesday’s second-round game was not known. An extended absence in the tournament could leave UConn in a tenuous position.

Approximately 20 Croatian women played various levels of college basketball this season, discovered via recruiting services, N.B.A. initiatives and word of mouth. Muhl is a touchstone, the first Croat to start for a team as successful and visible as UConn. In March 2019, Auriemma and coaches from Oregon, South Florida and Ohio State flew overseas to recruit her and persuade her parents to allow her to come to the United States for college. She accepted UConn’s scholarship offer several weeks later, without ever visiting the campus in Storrs, Conn.

Coaches say that top international players develop versatility by practicing more and playing less than Americans. They are also accustomed to an intense and physical style. Coaches find the players to be mature, independent and grateful for a scholarship to play in a country where women’s basketball receives more public and corporate support and meets less cultural skepticism.

“Here, you go to Panera and people recognize you,” said Dora Goles, a Croatian guard at Idaho State.

Some coaches have expressed frustration that American recruits often expect to be showered with attention and to establish close personal relationships with prospective college coaches in the social media era. Auriemma considers himself an instructor, not a friend, to his players, and he has said there are “too many people involved” in the recruiting process.

With international players, he said: “The parents are 6,000 miles away. They appreciate that their kids are getting an opportunity. And they’re not calling and asking how come she only got five shots the other night.”

Paige Bueckers, a guard and a native of Minnesota, is UConn’s leader and unquestioned star. She is only the third freshman named to the Associated Press all-American team. Muhl plays alongside her like a gas in a vacuum, filling empty spaces with her energy, passing, ravenous defense and increasingly confident 3-point shooting. In a victory over Marquette last month, Muhl delivered 8 points, 7 rebounds, 9 assists and 5 steals.

“She’s my slime, man,” Auriemma told reporters after Muhl scored a career-high 19 points against Creighton in late February, making a slang reference to an ally or compadre. Translated: “She craves playing defense. She pushes the tempo with the ball. She’s passionate and not afraid to show her emotions on the court. She’s fearless. I wish I had five of her.”

Auriemma, who twice has coached the United States women’s Olympic team to gold medals, said he largely credited the globalization of women’s basketball to the N.B.A., where more than 20 percent of rosters are filled with international players. “John Lennon said the Beatles were more popular than Jesus. The N.B.A. is more popular than the Beatles.”

Croatia, Serbia and Slovenia — independent nations that were all parts of the former Yugoslavia — are three of the top countries per capita that supplied players to the N.B.A. this season. In the 1990s, after the Eastern bloc and its satellites fractured, pioneering Croats like Drazen Petrovic and Toni Kukoc became N.B.A. stars and helped broaden the league’s international gaze. Nearly three decades after his death in an automobile accident, Petrovic remains such a muse that Goles of Idaho State sometimes wears his replica Nets jersey around campus and takes it to games as a talisman to inspire her shooting.

Women’s basketball in Croatia, though, is still trying to gain a cultural foothold, players say. Abrlic had a modest career at UConn in the late 1990s, and Croatia participated in the women’s basketball tournament at the 2012 London Olympics. But many girls don’t see a future and lose interest. Top players often look to leave for more recognized professional leagues in Europe, or for college in the United States.

“Back home, basketball and soccer are reserved for men,” Goles said. “It is very hard for young girls to stand up and play the sport they love.”

Darko Muhl, Nika’s father and the owner of a graphic design business, acknowledged that he and his wife, Roberta, tried to steer their eldest daughter into other sports. Basketball was not popular for girls. The parents feared injury. Boys, too, sometimes dismissed or mocked her, Nika Muhl said. So she challenged them to one-on-one games on a court outside the family’s apartment building in Zagreb, the Croatian capital.

“I showed them what I got so they just shut up,” Muhl said with a laugh. “Now no one can beat me on my court.”

Her success on the most celebrated women’s college team encourages aspiring players in Croatia “to feel like they can do it, too,” said Muhl’s best friend, Lucija Kostic, a sophomore forward at San Francisco. “It’s huge.” And it provides confirmation that much can be accomplished with few resources.

Sports and education in Croatia are largely divorced, as in most countries. Players develop in a club system, not a traditional high school system. Teams in the top women’s league largely consist of teenagers. Some older players are paid, but they are semiprofessionals who work day jobs as clerks and school aides. They might make $150 or $200 a month, compared with a sprinkling of Americans and other professional imports from more established basketball cultures, who generally make about $1,000 a month in Croatia, and receive free meals and lodging.

Games are played largely in front of family and friends. Gyms can be freezing in the winter, with players warming up in jackets and gloves, or boiling in the summer. Players regularly wash their own uniforms, bring their own food on road trips, do without trainers to wrap their ankles and therapists to massage their aching muscles.

Tihana Stojsavljevic, a graduate player at Virginia, recalled lifting tree limbs as makeshift weights as a teenager. If she goes home this summer, her father has suggested that she could lift a heavy bag of flour to strengthen her knee after recent surgery to repair a torn anterior cruciate ligament.

Given the lack of financing, support and facilities in Croatia, “what Nika has done is incredible,” Stojsavljevic said. “We work so hard, all of us. We do the same with much less.”

Amid disadvantages, advantages have been forged. Top Croatian youth players often leave home to join club teams, challenging themselves against older women. Goles, 24, joined the senior team of ZKK Split as a 12-year-old and became a starter at 14, playing against women as old as 30. Sent late into her first game at 12, Goles was fouled beyond the 3-point arc. When she hit two of three free throws, she said, both teammates and opponents clapped for her.

Most Croatian players in the United States, including Muhl, come from the same club team in Zagreb — ZKK Tresnjevka 2009. The head coach, Dean Nemec, is known for insisting that all his players learn to handle the ball, shoot a 3-point shot and develop moves in the post. Muhl’s younger sister, Hana, 17, currently plays on the team; she, too, has received interest from American universities.

“There is a lot of emphasis on individual development,” said Nemec, who is also team president, marketing manager and driver of the team van. “The philosophy here is it’s never a good thing to put someone in a certain position from the beginning.”

As could be expected, Muhl’s adjustment to life and basketball in the United States has had its ups and downs. Upon arriving at UConn last July, Muhl said she cried out of homesickness and uncertainty about the challenges ahead. She had an early-season foot injury and was benched for an important game against Tennessee in January because of rough fouling in practice.

“You Americans are soft,” she said. Maybe, Auriemma replied, but American referees officiated basketball a certain way and she would have to adjust.

At another point, he told Muhl, “In the dictionary, look up the word ‘solid,’” meaning he wanted her to be reliable, not always aiming to be spectacular.

Both Muhl and Auriemma have strong personalities. It is the reason, they say, they like each other, and also why they occasionally butt heads. Earlier this season, Muhl said, Auriemma revived an old admonition, telling Makurat and her, “Because of you guys, I’m not going to recruit any more European players.”

Muhl said they had learned to laugh off Auriemma’s jibes.