Home » Sport » The Rise and Rise of Bianca Andreescu

The Rise and Rise of Bianca Andreescu Bianca Andreescu, a 19-year-old Canadian, will play her first Grand Slam final on Saturday against Serena Williams. After Andreescu defeated Belinda Bencic in the semifinals on Thursday night, Pam Shriver of ESPN told her in a postmatch interview that a year ago, “I don’t think I’d heard of you.” Shriver would not be alone.

Andreescu has had a stunningly rapid rise to the top of tennis since this time last year, compiling a 44-4 record.

In the first round of the United States Open qualifying tournament, Andreescu loses to Olga Danilovic, 6-3, 7-5.

After the official end of the 2018 WTA season, Andreescu wins a small tournament in Norman, Okla., where the total prize money pot is $25,000

Seeded fifth in the qualifying draw of the WTA tournament in Auckland, New Zealand, Andreescu begins her 2019 season with a 6-2, 6-0 win over Kristina Kucova.

After winning three matches to qualify for the Australian Open, Andreescu gets her first Grand Slam main-draw win against the American wild card Whitney Osuigwe.

Two days later, Andreescu loses in the second round to the 13th-seeded Anastasija Sevastova, 6-3, 3-6, 6-2. It remains the most recent Grand Slam loss Andreescu has had.

During the second week of the Australian Open, Andreescu routs Eugenie Bouchard, 6-2, 6-0, in the quarterfinals of a lower-tier WTA event in Newport Beach, Calif. Bouchard, a finalist at Wimbledon in 2014, had been the most successful Canadian player in women’s tennis this century. Andreescu goes on to win the tournament, the biggest title of her career at that point. She improved her record for the year to 16-2.

Andreescu wins two matches in Fed Cup in ’s-Hertogenbosch, the Netherlands to lead Canada to the playoff round.

Andreescu loses to Sofia Kenin, 6-4, 3-6, 7-5 in the semifinals of the Mexican Open in Acapulco. It is the last completed match she has lost.

Andreescu turns heads by routing two-time Grand Slam champion Garbine Muguruza, 6-0, 6-1, in the quarterfinals of the prestigious tournament in Indian Wells, Calif. Four days later, Andreescu wins a roller-coaster final to claim the biggest title of her career so far, beating the eighth-seeded Angelique Kerber, 6-4, 3-6, 6-4. She is now 28-3 in the 2019 season.

Andreescu beats Kerber for the second time in seven days, 6-4, 4-6, 6-1, in the third round of the Miami Open. Andreescu struggled with her right shoulder during the match, and called for a visit from the trainer. As they meet at the net to shake hands, Kerber calls Andreescu “the biggest drama queen ever.”

Down by 1-6, 0-2 to Anett Kontaveit in the fourth round, Andreescu retires because of a right shoulder injury, which would keep her out for two months. The retirement counts as a loss; it is her most recent loss.

Andreescu throws out the first pitch at a Toronto Blue Jays game. The Blue Jays win, 5-3, over the Baltimore Orioles.

Andreescu plays her first match in more than two months, stretched across two days after being suspended because of darkness. She beats a lucky loser, Marie Bouzkova, 5-7, 6-4, 6-4.

The next day Andreescu withdraws from the French Open because of her recurring right shoulder injury. Her withdrawal gives a walkover in the next round to Kenin, who goes on to win her next match against Serena Williams. The walkover does not count as a loss, but marks the last tournament Andreescu entered without winning.

Andreescu pulls out of Wimbledon because of her shoulder injury.

Andreescu pulls out of the Citi Open in Washington.

Andreescu notches her first win in more than two months, beating Bouchard, 4-6, 6-1, 6-4. It would be her first of four consecutive three-set wins at the Rogers Cup in Toronto, in her home province of Ontario.

Andreescu wins an abbreviated Rogers Cup final when Serena Williams retires down 1-3 in the first set because of back spasms. Andreescu was the first Canadian woman to win the tournament, also known as the Canadian Open, in 50 years. Andreescu comforted Williams after she abandoned the match, saying she had watched her be a “beast” through her whole career.

Andreescu withdrew from Cincinnati soon after winning in Toronto in order to rest for the U.S. Open.

She begins the U.S. Open with a 38-4 record for the season. On Aug. 31, in the third round, Andreescu wins a match on Arthur Ashe Stadium for the first time, beating the 19th-seeded Wozniacki, 6-4, 6-4. It was Andreescu’s first third-round appearance at a Grand Slam. Many more firsts lie ahead.

She needs three sets to win her fourth-round and quarterfinal matches, improving her three-set record this year to 13-3.

In the semifinal against Bencic, Andreescu comes back from 2-5 down in the second set and takes the match, 7-6(3). 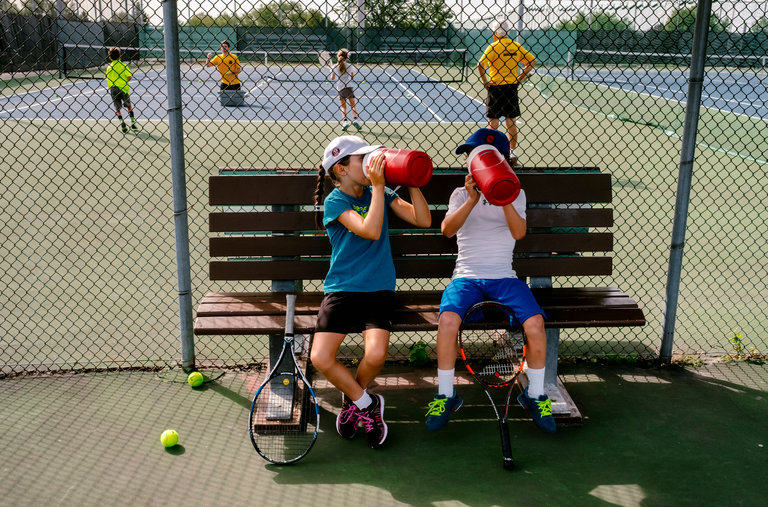 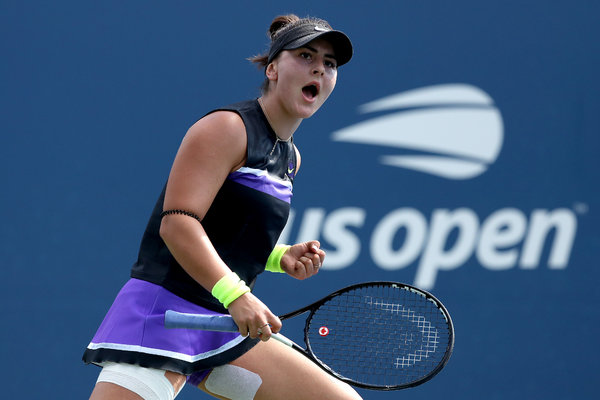 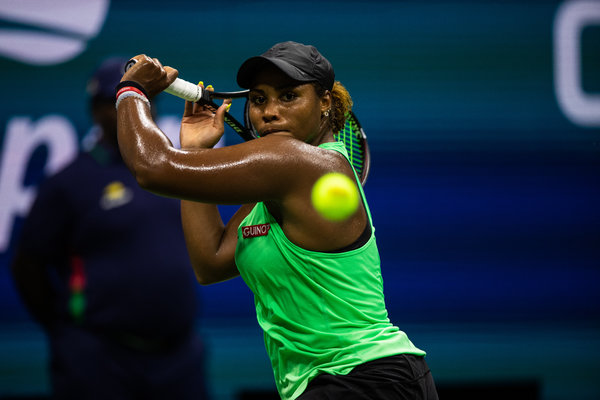