Home » Sport » The N.F.L. Made Some Changes Since the Last Time You Watched

The N.F.L. Made Some Changes Since the Last Time You Watched 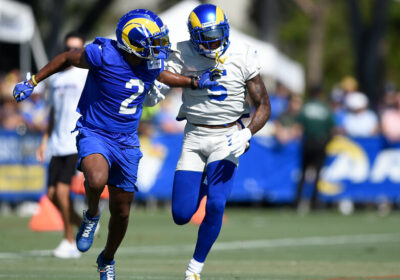 Watching a linebacker in a No. 9 jersey sack a quarterback is like watching a cat catch a Frisbee. It’s so strange that it’s a little disorienting.

The N.F.L. relaxed its longstanding uniform numbering policies for the 2021 season, making single-digit jerseys available to linebackers, defensive backs, running backs and wide receivers. The change will take some getting used to. There were so many low-number jerseys running around the field in preseason games that it looked as though the punters and kickers had staged an uprising.

The single-digit revolution would not be so jarring if the league’s biggest stars were given first dibs on the coveted jerseys. After all, Nos. 1 through 9 have been common at nearly every position in college football for decades because they are effective enticements for prized recruits.

But the N.F.L., strapped boutique that it is, requires any player who wants a single-digit uniform to buy back the existing allotment of his old jerseys first. The more famous the player, the more jerseys in circulation, the higher the price of a switch. As a result, mostly lesser-known players or those who recently changed teams took advantage of the new rule. Giants wide receiver Sterling Shepard, who had worn No. 87, will wear No. 3 this year, for example, while linebacker Matt Judon, a newcomer to the New England Patriots, will go from 99 to 9.

So instead of trophy pelts for All-Pros, single-digit jerseys look more like vanity plates.

The new uniform numbering system is sure to be unpopular initially among neo-traditionalists old enough to decry any change as evidence of the further softening of society (“Seventy-three: Now there’s a number a REAL MAN can count to!”) but not old enough to remember that the Giants Hall of Fame center and linebacker Mel Hein wore No. 7.

Fans will have to adjust to some other unfamiliar sights.

The N.F.L. announced in its August officiating video that it would make a stronger effort to enforce its taunting rules, flagging players for “baiting or taunting acts or words” and “abusive, threatening or insulting language or gestures.”

History tells us that the league’s sportsmanship sting operations inevitably transform game officials into 16th-century clerics eager to stamp out dancing, laughter and the display of any emotion besides penitence and shame. Sure enough, overzealous officials penalized a few players this preseason who celebrated while looking in an opponent’s general direction.

History also tells us that the bonfire of the gridiron vanities usually putters out by October, either because officials grow weary of adjudicating chest thumps and cocky grins or because public outcry prompts the league to order them to stop acting like junior high dance chaperones.

In 2015, the N.F.L. commissioner, Roger Goodell, stated that the league was “open about our position that we oppose legalized sports gambling” and that he did not “anticipate us changing that going forward at all.”

Last week, the league announced agreements with FOX Bet, BetMGM, PointsBet, and WynnBET to join Caesar’s Entertainment, DraftKings and FanDuel as approved sports book operators for the 2021 season. Just about the only unapproved sports book left is the one Uncle Junior ran out of the back of his candy store in 1962.

The new agreement means more choices for wagerers and even more visible gambling advertisements and pregame programming for everyone else. TV analysts may not openly comment on the point spread just yet, but that is likely to happen sometime before Al Michaels retires.

If the league’s new permissive attitude toward gambling appears to be at philosophical odds with its puritanical taunting policy, keep in mind that one activity increases direct revenues while the other does not.

The gradual shift from traditional television should give the cable-bound audience time to prepare. Bartenders won’t be forced to dangle smartphones from 80-inch televisions so their patrons can watch the game just yet, and fathers-in-law won’t call in a panic at 8:30 on Thursday night asking what “channel” Amazon is on.

For the tech-savvy segment of the population, the switch will be as easy as logging on to Amazon Prime Video … oh, forgot the password … now it’s texting me a verification code … oops, accidentally clicked “pallet of paper towels” instead of “Cincinnati Bengals at Jacksonville Jaguars.”

Oh well, at least the shipping is free.

Practice squads used to consist of 10 players with less than two seasons of accrued N.F.L. experience. They were expanded to 16 players in 2020, six of whom could be veterans, so teams could stash some reinforcements on the practice squad in case of quarantines. Those rules were carried over for 2021, and teams are taking full advantage of them, particularly when it comes to emergency quarterbacks. No team wants to start an undrafted rookie wide receiver at quarterback because of a virus outbreak, as the Denver Broncos did last season.

Seeing a 12-year veteran like New England Patriots quarterback Brian Hoyer relegated to the practice squad is like discovering that an old college chum with an M.B.A. is delivering for DoorDash and driving for Lyft to make ends meet. Totally normal for the 2020s, in other words.

The Return of Holding

The N.F.L. wisely instructed officials to be less stringent about offensive holding in 2020, lest games be marred by endless flags after the Covid-canceled preseason. Per Football Outsiders Almanac, offensive penalties dipped from 3.6 per game in 2018 and 2019 to 2.6 per game last year, with holding penalties dropping from 725 (1.41 per team per game) in 2019 to 430 (0.84) in 2020. Not coincidentally, scoring increased to an all-time high of 24.8 points per game, and the games themselves were noticeably crisp and enjoyable.

The N.F.L. must have thought everyone was having too much fun (see: the taunting rules), because the 2021 preseason holding rate bolted back up to 1.58 penalties per team per game. That rate may have been inflated by fourth-quarter, fourth-stringer shenanigans, but it is still a discouraging trend. Then again, a rash of holding penalties, like a swarm of cicadas, may be an annoying sign that nature is healing itself.

All these changes to the N.F.L. may be off-putting as the regular season begins. Rest assured, however, that in a few years it will seem totally natural to place a bet, purchase your favorite cornerback’s -3 jersey and stream the game from a single cellphone app while Goodell and the N.F.L.’s corporate partners watch over us from orbit.